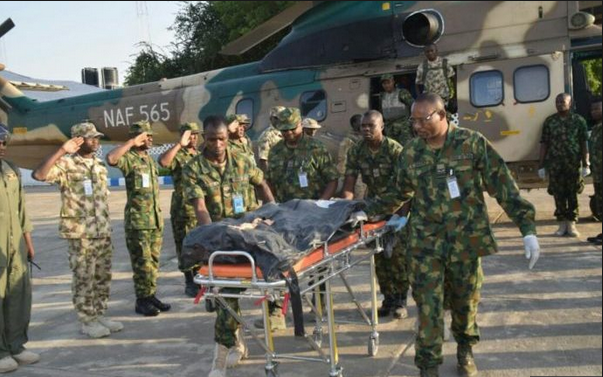 The Federal Government has released the names of the seven Nigerian military personnel killed by Boko Haram terrorists in Borno State last Friday and would be buried today in Abuja.

Below are their names as released by President Muhammadu Buhari’s aide on Digital Communications, Tolu Ogunlesi:

The 7 military personnel who will be buried today at the National Cemetery in Abuja. #RIPAbuAli pic.twitter.com/t8vd1CCzxn

According to the spokesman of the Nigerian Army, Colonel Sani Kukasheka Usman the deceased would be given a national burial at the National Cemetery, Umaru Musa ‘Yar’adua road, Abuja by 5pm.

Meanwhile, it was gathered that President Buhari has appointed a high powered delegation to be led by the Chief of Staff, Abba Kyari, that includes the Minister of Federal Capital Territory, Mohammed Bello and the Minister of State Solid Minerals Development, Baba Buhari to represent him at the funeral.