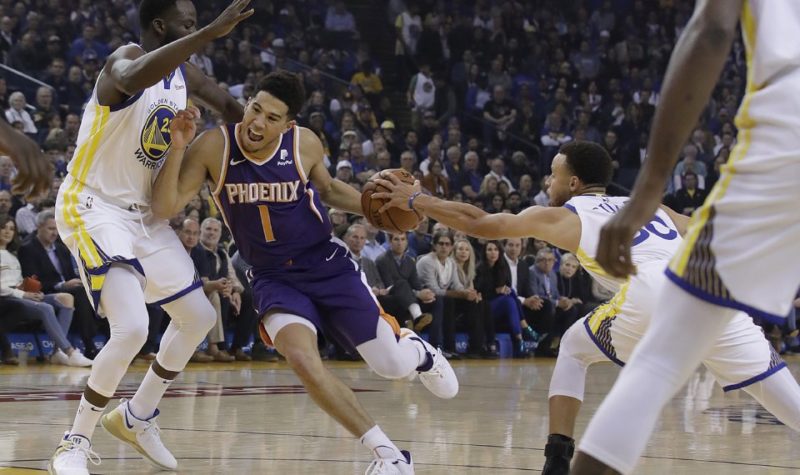 Devin Booker’s jumper with 5:01 remaining gave Phoenix the lead for a good Sunday night as the Suns snapped an 18-game losing streak to the Golden State Warriors with a 115-111 victory in Oakland, Calif.

Playing the second night of a back-to-back, the Suns found the energy to outlast the Warriors after having trailed by as many as 16 points.

The Suns hadn’t beaten the Warriors since November 2014 and hadn’t won in Oakland since February 2011. The loss was the Warriors’ second in six days, sandwiching a 122-105 home win over Denver on Friday.

Booker finished with a game-high 37 points, including 13 consecutive Suns points during a stretch of the fourth quarter in which Phoenix took charge of the game. Klay Thompson had 28 points and Kevin Durant 25 for the Warriors.

Embiid had been out with a sore left knee but came back to post his league-best 49th double-double of the season as the Sixers snapped a two-game losing streak.

With the win, the Sixers moved into third place in the Eastern Conference, holding a tiebreaker over the Pacers. Bojan Bogdanovic led the Pacers with 18 points while Darren Collison added 14.

The Spurs trailed the entire first half but took the lead in the third quarter and led by four points heading to the fourth. Marco Belinelli and Patty Mills hit for 16 points each for the Spurs, while Bryn Forbes added 12.

James Harden, who picked up his fifth foul in the opening seconds of the third quarter, missed 18 of his 25 shots and took just three free throws in finishing with 20 points. Center Clint Capela added 17 points and 12 rebounds.

Luka Doncic, who was hobbling late in the game, led the Mavericks with 19 points, 15 rebounds and nine assists. He didn’t have a good shooting game, going 5 of 16 overall and 1 of 6 from beyond the arc.

Mike Conley brought host Memphis from behind to steal a win from Orlando, giving the Grizzlies their fourth win in their last five games.

Memphis trailed 95-88 with 3:06 remaining but closed out the game on a 17-2 run. Conley had 26 points, eight assists and five rebounds, and Avery Bradley added 21 points for the Grizzlies.

Nikola Vucevic led Orlando with 26 points and 10 rebounds, and Terrence Ross added 15 points off the bench.

The Magic have lost three of their last four games, though they sit just one game out of the eighth and final seed in the Eastern Conference playoff race.

Collins followed Saturday’s performance of 33 points and 20 rebounds against Brooklyn by getting 23 points and 10 rebounds for his 27th double-double.

He also had four blocks, two of them in the final quarter when the Pelicans were trying to mount a comeback.

New Orleans centre Anthony Davis returned after a missing a game with back spasms and finished with 15 points and eight rebounds. Davis played only 21 minutes. The Pelicans were led by Frank Jackson and Julius Randle, who each scored 23 points.

Taj Gibson scored a season-high 25 points and filled in nicely for injured center Karl-Anthony Towns, as Minnesota ran its home winning streak to six games at the expense of New York in Minneapolis.

Towns (right knee inflammation) missed the third game of his career after injuring his knee with eight seconds left in Saturday’s overtime win over Washington.

The injury appeared significantly worse when Towns limped off the floor but and was held out of Sunday’s game as a precaution after participating in pregame warmups.

Jeff Teague collected 20 points and 10 rebounds for his 11th double-double as the Wolves shot 44.7 per cent while playing without Andrew Wiggins (right quad) for the second straight game.

Kawhi Leonard did not play Sunday because of “load management” for the Raptors, who ended the Heat’s four-game winning streak.

Pascal Siakam added 20 points for the Raptors, who have won all three meetings with the Heat this season.

Blake Griffin racked up 28 points, six rebounds and five assists and streaking Detroit defeated Chicago for the second time in three days and completed a four-game sweep for the season.

Reggie Jackson and Langston Galloway had 21 points apiece and Andre Drummond supplied 16 points and 15 rebounds for his 18th double-double for the host Pistons, who won their fifth straight and 12th in their last 14.

Related Topics:NBANew Orleans
Up Next

Pupils in collapsed building not up to 100 – LASEMA GM

My Administration will not loot Kwara treasury, Abdulrazaq vows 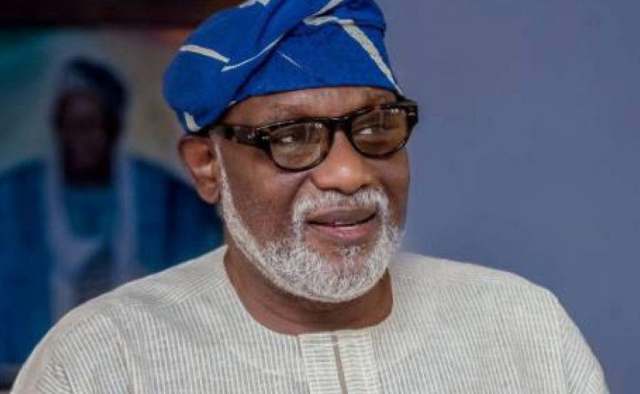 The Chairman of SKYE Hospital, Akure, Dr. Ikubese Thomas-Wilson, has urged Gov. Rotimi Akeredolu to urgently meet with the state chapter of the Nigerian Medical Association (NMA) in order to bring the striking doctors back to work.

Thomas-Wilson, in an open letter to the governor on Thursday in Akure, said that the call had become necessary, following the death of a senior doctor and other residents from COVID-19 complications in the state.

He said that the doctors, who had been on strike in the last three weeks, needed to return to their duty posts urgently in order to avert greater calamities.

In his letter, entitled ‘COVID-19: Help, Our Doctors Are Dying, Thomas-Wilson noted that the state had very few cases of confirmed COVID-19 until the lockdown was eased by the Federal Government.

He said that the reopening, a few days ago, of places of worship, with people going about their daily activities with no regard for COVID-19 protocols, should be reviewed.

According to him, the state is not immune from the virus, adding that it has become expedient for the governor to call a stakeholders’ meeting urgently to review the current COVID-19 pandemic, as the current measures are obviously not working.

“As of today, Ondo state is gradually edging towards becoming the COVID-19 hotbed in Nigeria, because it came tops on the table, second only to Lagos.

“Last week, we lost the Commissioner for Health, Dr. Wahab Adegbenro, to the ravaging pandemic.

“Just this morning (Thursday), we lost one of our senior medical doctors and former Ondo State Chairman of the Nigerian Medical Association, Dr. Matthew Adeyeri, to COVID-19.

“Several senior doctors, nurses, and laboratory scientists in the state are currently in isolation.

“The most unfortunate aspect of this development is that medical doctors in the employment of Ondo State government are currently on strike, as government hospitals are no longer attending to patients.

“Even the doctors at the hitherto very busy and critical Infectious Disease Hospital (IDH) have recently down tools.

The medical practitioner also noted that the 12-bedded Infectious Disease Hospital in Akure had also been overstretched with several COVID-19 cases.

“Convening an urgent meeting with the leadership of the state chapter of the Nigerian Medical Association to resolve the knotty issues will avert even greater calamities ahead,” he said.

Thomas-Wilson commiserated with the families of his departed colleagues.

The Newsmen gathered that Adeyeri was reportedly taken to the Federal Medical Centre, Owo, on Wednesday after he was suspected to have contracted the virus.

Hushpuppi not currently on our list of billionaires – Forbes 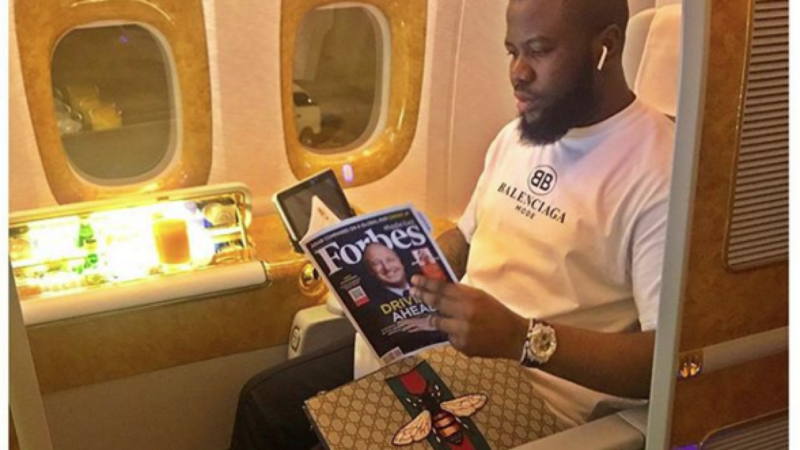 Hushpuppi, who boasts of over 2.4 million followers on social media, was known to always flaunt his ostentatious lifestyle.

Huhspuppi boasts of many luxury cars including two Rolls Royce, a Maybach, a Bentley, a Ferarri, Mercedes G Wagon, and many more, some of which were seized when he was arrested by the Dubai Police in the United Arab Emirates last month before he was extradited to the US.

The Nigerian, who is currently facing charges of conspiracy to commit money laundering, among others, in the United States, used strictly private jets for international travel where he videos himself consuming expensive champagne and food.

Some of the photos of his travels he posted on social media showed him reading copies of Forbes magazine.

The magazine famous for listing richest people on earth including Jeff Bezos, Dangote, Bill Gates, amongst others, however, said in an article on Thursday that Hushpuppi was not on its list of World’s Billionaires.

“Forbes does not currently include Abbas on our list of the World’s Billionaires,” it said.

The magazine, which said richest people on earth are not immune to the coronavirus, said there were over 2,095 billionaires in the world worth over $8 trillion, but Abbas, who was accused of committing over N168 billion scam was not one of them.

According to the Federal Bureau of Investigation, Abbas is alleged to have attempted to dupe an English Premier League football club of £100m (N48.4bn).

FBI said should Hushpuppi be convicted, he risks spending 20 years in jail. 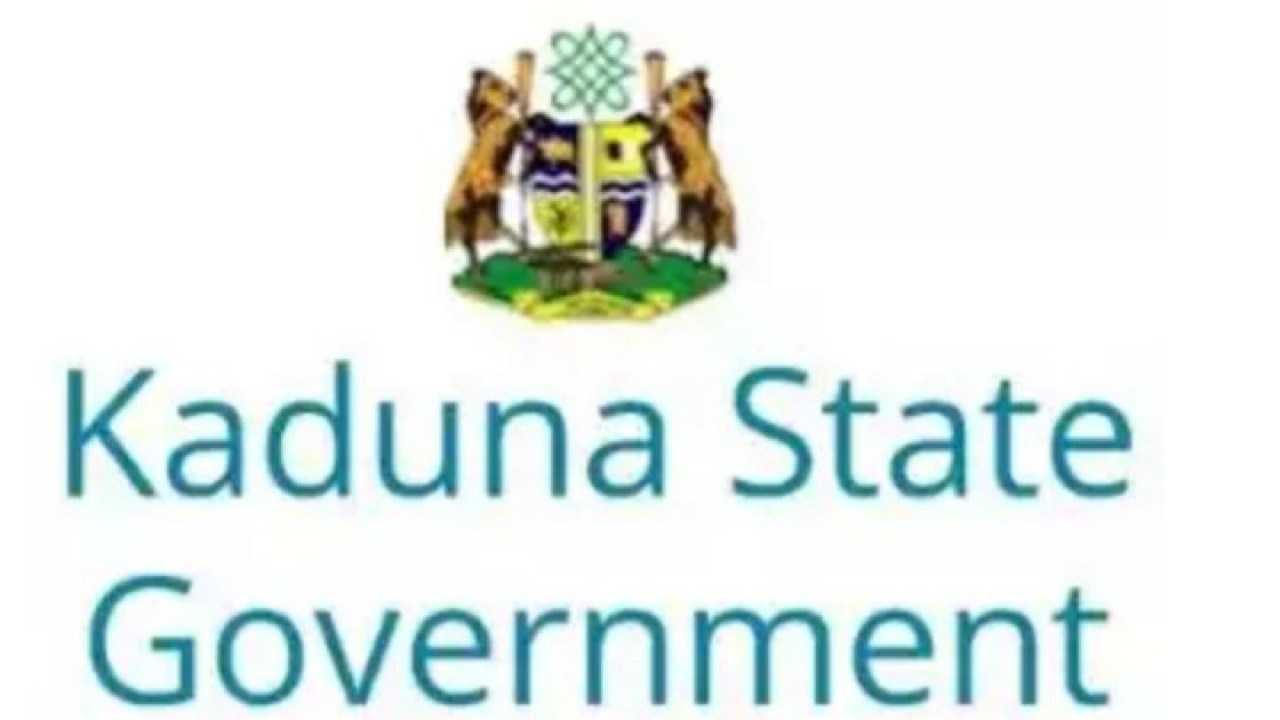 The Kaduna State Government has declared a state of emergency on Water, Sanitation, and Hygiene (WASH) to enhance a healthy society.

Mr. Muyiwa Adekeye, Special Adviser to Gov. Nasiru El-Rufai on Media and Communication, said in a statement that the declaration was to enable the government to attain the national goal of Open Defecation Free (ODF) by 2025.

Adekeye stated that the state of emergency in the WASH sector would enable the state to build on the success of the Sanitation, Hygiene, and Water in Nigeria (SHAWN II) program.

According to him, significant progress is being recorded in ridding the state of open defecation.

He added that Jaba Local Government Area had been validated by UNICEF as having attained ODF status.

“This was achieved through the implementation of relevant WASH projects and consistent sensitisation of communities,’’ he said.

Adekeye added that steps were being taken to achieve state-wide ODF status across the 23 local government areas.

“The state government places a priority on the provision of clean and safe water and promotion of basic hygiene.

“These are central to delivering quality health care and life expectancy, which are important human development indices.

“Also, water and sanitation are very critical in preventing killer diseases like cholera, Lassa fever, typhoid, as well as COVID-19.’’

The special adviser revealed that the state’s Rural Water Supply and Sanitation Agency (RUWASSA) rehabilitated 110 boreholes across the state in 2019, with funding from UNICEF.

“By May 2020, RUWASSA had rehabilitated another 216 boreholes in various communities across the state.

“In addition, local artisans were trained and provided with tool kits to assure future repairs of the boreholes, enhance community participation and ownership, as well as the sustainability of the installations,’’ Adekeye said.

He said that the state government would continue to invest in human and material resources, to eliminate open defecation.

Adekeye commended UNICEF’s role in helping the state to achieve the ODF status, adding that the UN body had been a very supportive ally in that effort.

“Kaduna State looks forward to building on the gains of the SHAWN II program and attaining a vital sustainable development goal,’’ he said.

Italy bans entry from 13 countries due to coronavirus fears