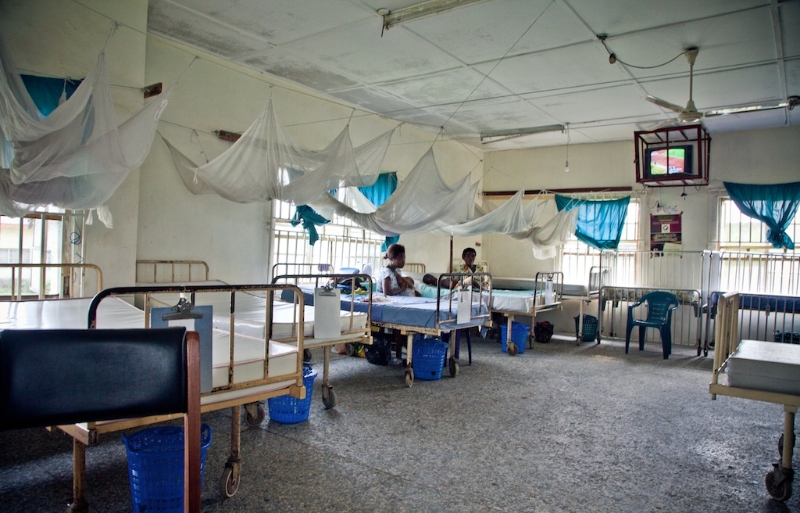 A Nigerian journalist has expressed his dissatisfaction with the activities of some medical practitioners in Nigeria, especially private practitioners, following his recent misdiagnosis experience at a hospital in Lagos.

The media practitioner identified as Adediwura Aderibigbe took to his Facebook page on Tuesday to share his experience which has also evoked reactions from social media users who claimed they have had a similar experience.

Narrating his ordeal Adediwura said he had checked into his regular hospital after feeling malaria symptoms because he didn’t want to resort to self-medication.

After explaining his symptom to the doctor on duty and was asked to undergo a malaria test, the journalist said he retorted and suggested that a typhoid test be included, a suggestion the doctor declined.

He said after exhausting the drugs prescribed to him and was not feeling better he had to seek the help of his brother who is also a medical practitioner.

“A few weeks ago, I had a cause to check into a hospital – – the one I normally use and assumed reliable.

“After I explained how the thing dey do me to the doctor, she asked that a malarial test be carried out. I retorted and suggested that a typhoid test should also be included. She didn’t agree. She said it was only malaria. Well, how do you argue with a medical doctor, sebi I am a bloody communications person.

“When the result came out, of course it was Malaria. Drugs were prescribed. Exhausted the medicines but symptoms persisted. So, I went back about a week after.

“This time, two young doctors were in the consulting room – – a man and a lady. Two heads, they say, are better than one abi. I narrated my story from Genesis. They both agreed that I still had some malarial symptoms.

“Again, a malarial test was prescribed. Again, I said they should include Typhoid. He started explaining some yeye terminologies and medical jargons that didn’t make any sense to me; insisting I didn’t have Typhoid. The doctors won again.

“The result came out and they said I still had +1 malaria. And that they would give me another variant of malarial drugs. They mentioned something that ended with ‘quine’. I quickly protested. The last time I used a drug called Modaquine (not sure of the exact name), I saw angels trying to open the Heavens gate. I almost died.

“As a result, they opted for injections. Ah. Injections báwo. The last time I took that thing must be almost 15 years ago. Well, I agreed to take the injection. Anything to make me feel better.

“I took injections. No difference. Fear begin dey catch me. Na who I offend that did not want to forgive me?

“Then, I got a nudge to put a call through to my brother who is a medical practitioner. I told him how the thing dey do me. He wanted me to run a test. I insisted that it was most likely Typhoid that was ‘typhoiding’ me. He reluctantly prescribed Amoxyl and blood tonic for me. I quickly sent someone from the office.

“So, tell me. Why won’t Nigerians engage in self medication when some hospitals appear to perform below par. Does it mean that the collapse in Nigeria’s education is reducing the quality of medical doctors in the country?

“I have heard stories of wrong diagnosis here and there. I guess I was even lucky not to have been told that I had a serious disease.

“For me, I have vowed not to go back to that yeye hospital. Let me not mention their name.

“What’s your experience with Nigerian hospitals?”

One of those who responded wrote:

“That is how one Bay hospital doctor nearly kill my son he was treating him for malaria and gave the boy double dosage tablets of the same injection that he had already given him and before evening my son could not talk again his tong started folding backwards and he was in serious pain we ad to rush him to a pharmacy that quickly neutralized the drug in him.”

“It is disheartening that things like this keep occurring, I was misdiagnosed in 2016 too at a private hosp. I was treated for typhoid more than 5time in that year still no headway, I kept running test upon test injection nko hmmm practically got used to the pain, still no gud result not until i got to a public health centre and God used one of the doctors for me. Just one single test and the problem was detected and all the suffering for almost 6months ended.”

See screenshots of some of the reactions: 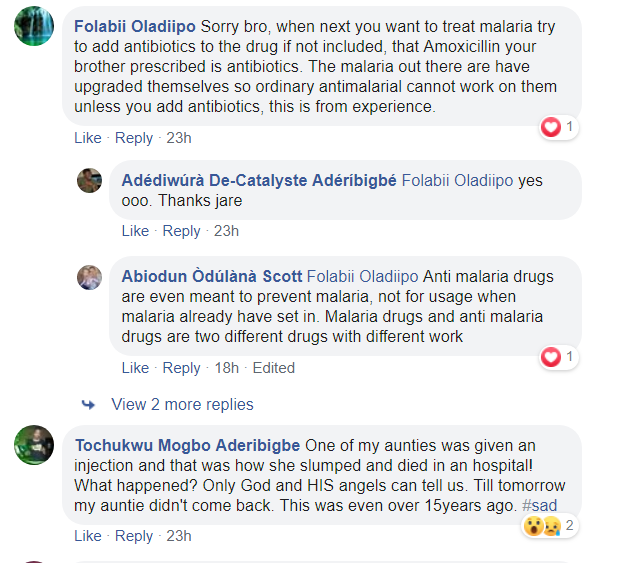 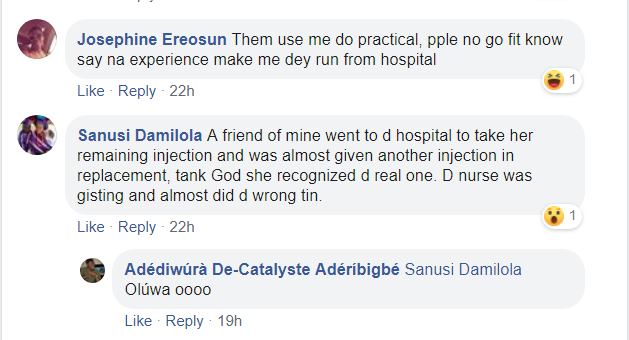 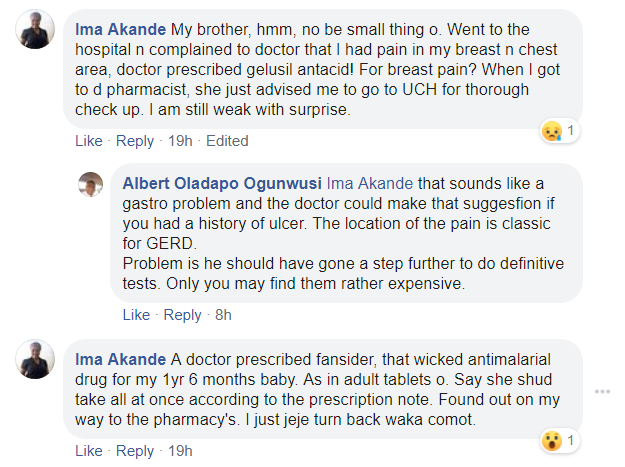 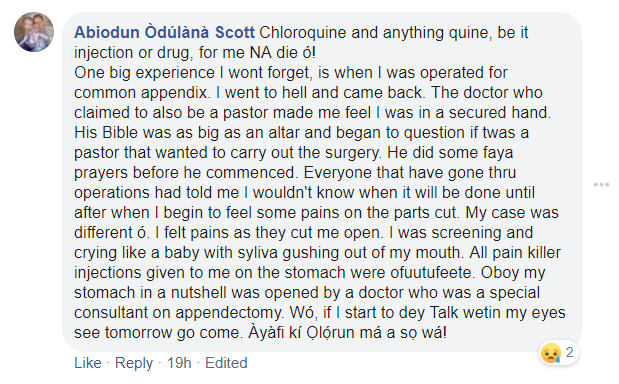 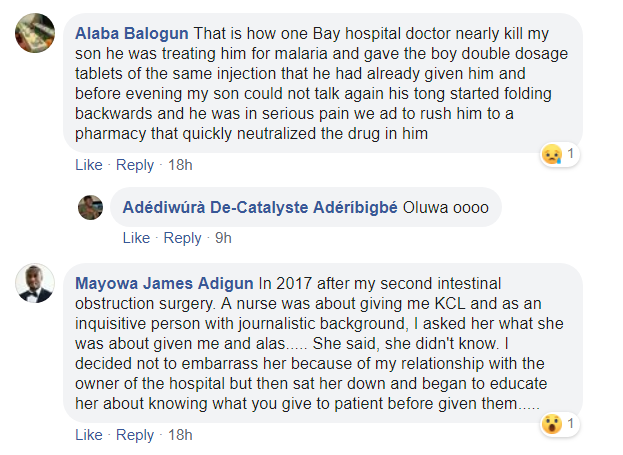 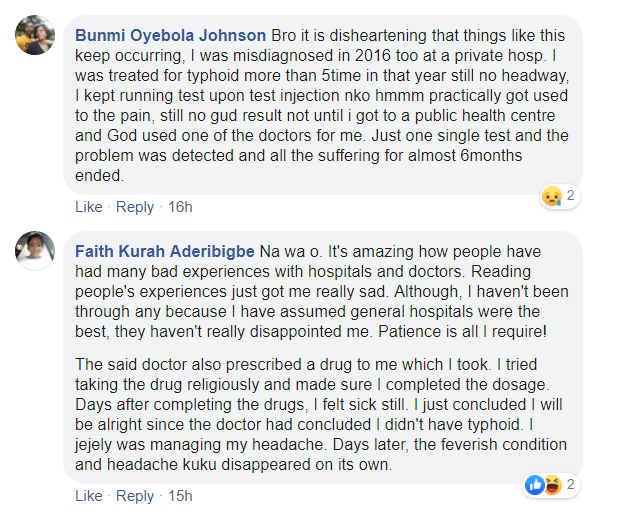 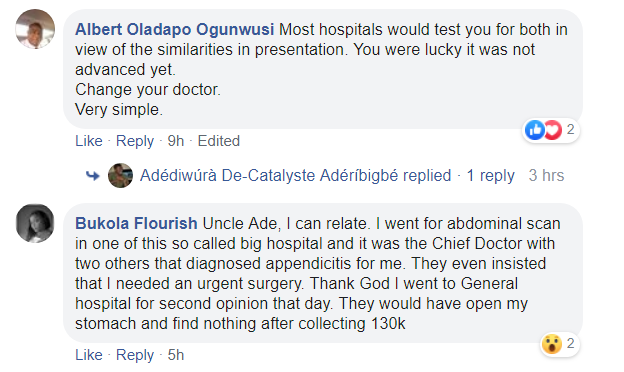 El-Zakzaky caged like a criminal in India hospital, says IMN
Lady recounts how she was rejected in a church for having one limb