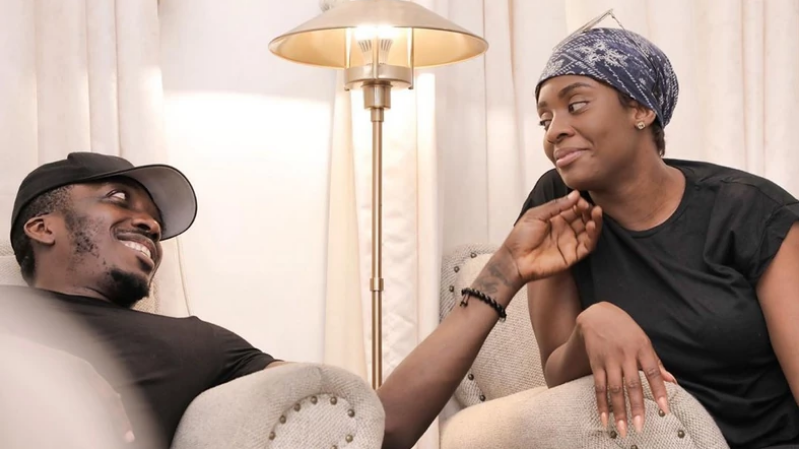 Popular Nigerian comedian, Bovi, seems to have broken the table of ‘bro code’ after revealing one of the crucial rules from the ‘code’ men have been faithfully adhering to in staying loyal to their colleagues in times of need.

The comedian who will be turning 40 on September 25, 2019, decided that the best way to celebrate the birthday was to pull a prank on eight of his loyal friends and some Twitter users are fuming about this.

Rule number 58 of the bro code, a set of rules influenced by pop culture serving as friendship etiquettes among men, says ‘a bro always has his bro’s back’ and that’s exactly what Bovi’s friend stayed true to.

He shared the first of the eight videos on Thursday and it didn’t take long before it sent social media abuzz with many Nigerians trolling him for exposing the ‘bro code’.

While the heat generated by the first video is yet to subside, Bovi dropped the second video on Friday morning prompting some Nigerian men to whimsically call for his excommunication, while others also declared that he has been disowned from the league of men.

In the first and second videos, Bovi’s wife, Kris Asimonye-Ugboma, who was standing with her husband in their living room called his friends Mohammed and Ufuoma Kerewi respectively asking if Bovi was with them. She told them Bovi said he was with them but is not picking his calls and wanted to confirm if he was truly with them.

Mohammed quickly cover-up for Bovi and answered in the affirmative claiming he was moving close to Bovi to give him the phone, but Ufuoma told Kris that her husband may have told her he was going to see another Ufuoma and not him.

A few seconds later, the two men called Bovi to inform him about the wife’s call, asking him to explain what where he is.

After speaking with Bovi, they called Kris to cook up lies about his whereabouts, not knowing Bovi was standing beside his wife to pull a prank on them.

The comedian also revealed that some of his friends have been begging him not to release their videos, “I’m sorry. I’ve gone mad,” he said.

Reacting to the pranks, popular rights advocate, Segun Awosanya aka Sega quoted one of the videos on his Twitter handle and wrote:

“Bovi has desecrated the Continental grounds. You don’t conduct business in the premises by joking with critically sensitive sanctuary code preserved by men of honor for eons. You are hereby excommunicated effective immediately. Signed— League Of Extra Ordinary Gentlemen.

“In an hour or two from now once his contract is set, he will be sharing fashion tips with Bobrisky.”

Singer Timi Dakolo in his response to Sega’s tweet wrote:

Bovi is not one of us anymore

Boys will always be boys. No matter what. And to those begging me not to release their tapes, I’m sorry. I’ve gone mad

If your noticed, madam didn’t laugh much. It was meant to be funny but……reality kicked in. Mohammed should watch what he rats in Bovis house from now on .th reception might be jokingly cold 😀😁😂

@officialBovi we the disciplinary counsel of upholding the Brocode in the world thereby suspend indefinitely you for committing insubordination and throwing Muhammad under the bus
The fine shall be determined by Muhammad himself🎯 pic.twitter.com/71adTjfpdq

You see dat Bovi prank, dat na men’s code guys only use for their main men during n emergency. The day Bovi go really need am n his guys used am on his behalf. The wife no go kuku believe them again. Unnecessary prank

Bovi deserves to be sanctioned!! This snitching can not go unpunished 🤣🤣🤣🤣 https://t.co/9RlcKnorOm

This is an unforgivable breach of code. You are hereby excommunicated effective immediately 😡. https://t.co/YvSFUZLafr

Bovi took his best soldier, and killed him just to test ammunition

Bovi has revealed crucial Bro code secrets and has therefore been declared Ex-Communicado.
No Bro code services will ever be given to him again. He will no longer be welcome to The Bro code Continental grounds.
This take effects immediately.

Bovi The Comedian and other married men needs to take their time, you can’t be revealing sensitive Bro-Code information to women because you’ve attained legendary status in the game and now retired.

Stop blowing our covers, we still use these codes else we court-marshal una.

Bovi’s wife now knows the guy that has her husband’s back 100% and would rather side him than he also she knows who exactly not to call whenever she can’t reach her husband.

Bovi no try at all
pic.twitter.com/cvCxToW2aH

Bovi’s friend, and other Association of Loyal Friends members, should sue Bovi for flouting the Bro Code.

Never prank your guy with your woman. Rule: 312. We must not take this aberration likely. We call for the immediate excommunication of Bovi from the League of Extraordinary Gentlemen.