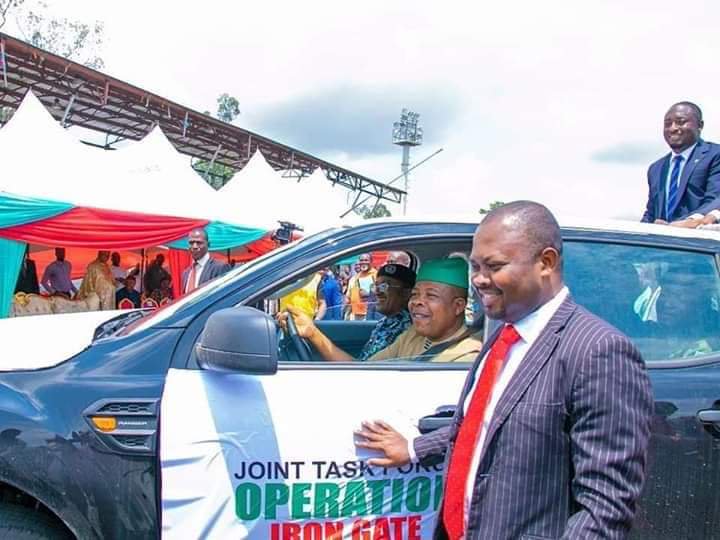 During the launch, the governor distributed new 80 vehicles to the 27 council areas and security agencies to aid their operation and performance.

Some Twitter users became peeved when photos of the event emerged on social media showing that the vehicles acquired and distributed to the security agencies by the Imo Government are all Ford brand.

Reacting, Twitter users slammed the governor for snubbing his ‘kinsman’ to patronise a ‘foreign’ brand.

Some argued that at a time the government is making efforts to promote and encourage local content by patronising local producers, the Imo State Government decided to snub Innoson vehicles for Ford, describing the action as a discouragement for local content.

Others, however, argued that the vehicles were not imported but were acquired from a Nigerian distributor, saying the Imo government’s action will also encourage local business owners.

Imo state Governor, unlooked Anambra state where a fellow Igbo man is assembling Innoson Motors, and went to USA to buy 100s of Ford vehicles. Army bought from Innoson, FRSC bought from Innoson, but Emeka Ihedioha decided to buy from Ford, when charity begins at home is nonsense.

To think that Innocent Chukwuma (Innoson motors) is the Chancellor of Imo State University Owerri, yet the Governor had to travel to USA to buy 100 ford trucks beats my imagination & makes Emeka Ihedioha a joke. MFR my foot when you can’t hold the ‘Nigeriannees’ above prejudice pic.twitter.com/DzgPpqSvbC

The case of Imo State Governor snubbing Innoson (Nigeria) for Ford (USA) is the same case Nigeria exporting its crude oil to import a refined product. Like Nigeria like Imo.

In April, 2019,Buhari acquired 77 Hilux vehicles from Innoson Motors for the usage of the FRSC, but Imo state gov, Ihedioha snubs Innoson, went to the US and acquired 100s of vehicles. And then some nitwits and cretins will come on Twitter to say Buhari is the enemy of the Igbos pic.twitter.com/khVPjEJjs8

Nigeria will need to buy Nigeria to grow. pic.twitter.com/scx19gNgr8

If it were Oyo State producing Innoson Motors, the Oodua states would have come together despite political difference and charted a plan for proliferation of the brand, at least among their states.

they said if innocent was to be northerner PMB would’ve been encouraging his patronage, but now that an igbo son v done this they are now quiet, this ppl are sadist and hypocrite

Federal govt is buying from him and also some state governors…

When a leadership that doesn’t know how to make a people rich assume power, that is what they do. They don’t understand that the jobs that comes as we use our own goods is d prosperity of d people… LOCAL CONTENT.. Made in Nigeria products..Forex… that is the wealth.

If that is your claim, then why did Ihedioha chose to patronise FORD when we have made in Nigeria vehicles?

For Buhari to patronize Innoson motors could means Innocent Chukwuma is an APC Member, while Emeka Ihedioha is a PDP Member.

Cos everything in Nigeria is mostly politics.

I’m sure you are not aware that Ford assembles in Nigeria.pls check your facts before you tweet.

That is because we still have that mentality that what a white man built is better that what a black man built. He forgot that patronizing Innoson will put food on the table of many Nigerians that are employed there.

Oma ! Please fact check before writing on this matter . Cosmos Maduka , COSCHARIS , assembles Ford cars in Nigeria . INNOSON also imports a large part of the components of his cars from China .You know what happened to our iron and steel plant at Ajaokuta in kogi

My bros in whom I am very very well pleased!!! Can we confirm if dey are imported or obtained from d accredited 9ja dealer! One road no dey lead go market or enter market, but I wish Coscharis d best in establishing A FORD ASSEMBLY PLANT for 9ja, NOTHING IS IMPOSSIBLE!!!

MORE READING!  Covid-19: Man mourns as he loses girlfriend in Abuja
Related Topics:Emeka IhediohaFeaturedFordImo stateInnosonInnoson GroupNigerians on Twitter
Up Next