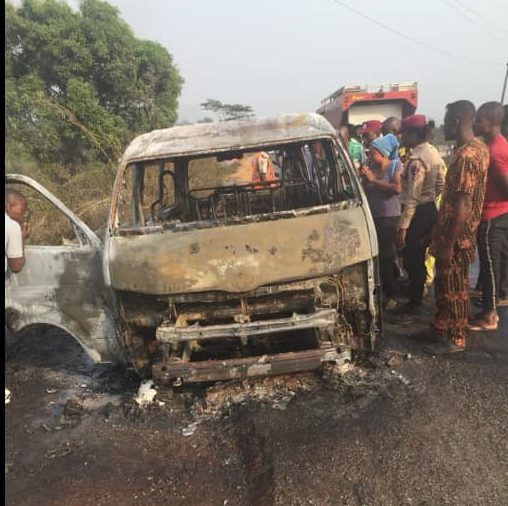 No fewer than nine persons were reportedly burnt to death in a commercial bus explosion that happened at Ijebu Ife along the Ore-Ijebu Ode-Sagamu road in Ogun state.

Confirming the incident in a statement on Thursday, the Sector Commander, Federal Road Safety Corps [FRSC], Ogun State Command, Clement Oladele, said the accident occurred at about 3:20 pm on Thursday.

“While some of the passengers were rescued from the raging inferno, some other passengers as at time of this report are still trapped in the burning vehicle.

“A total of 10 people comprising six males adults and four female adults have been rescued from the inferno with three other people made up of two male adults and one female adult sustained seriously injures with some suffering first degree burnt .”

He added that men of the fire service had been invited to extinguish the inferno.

According to Oladele, the injured victims were rescued to a nearby hospital, Ijebu-Ode for immediate medical attention.

“during investigation, by the FRSC Crash investigators, one of the injured victims confirmed the total number of passengers as at the time the ill-fated vehicle commenced the trip were 19 passengers

“The ill-fated Bus has been confirmed to be the property of De-modern transport company.

“Further preliminary investigating by the FRSC Crash Investigator revealed that the vehicle while on transit suffered malfunctioning and had to stop intermittently at several times to repair the faulty fuel pump and fuel tank which they kept on managing by tying ropes to support the malfunctioned fuel tank with the connecting fuel tank connection which the driver hoped could be managed to take them to Lagos, suddenly sparked and engulfed in fire.

“The faulty fuel tank at some point in the journey detached partially from the vehicle while on motion. The tank was haphazardly fixed and at some point during the trip made contacts with the road surface causing intermittent sparks

“The unidentified flammable substances conveyed in the Bus assisted to intensify the inferno.

“After the fire was extinguished by the Nigeria Fire Service, a total of nine people seven adults and two children were confirmed dead.

“The FRSC has again advised motorists to adhere strictly with the 1947 United Nations Agreement Concerning the International Carriage of Dangereous Goods by Road (ADR) to prevent this type of avoidable crash.” 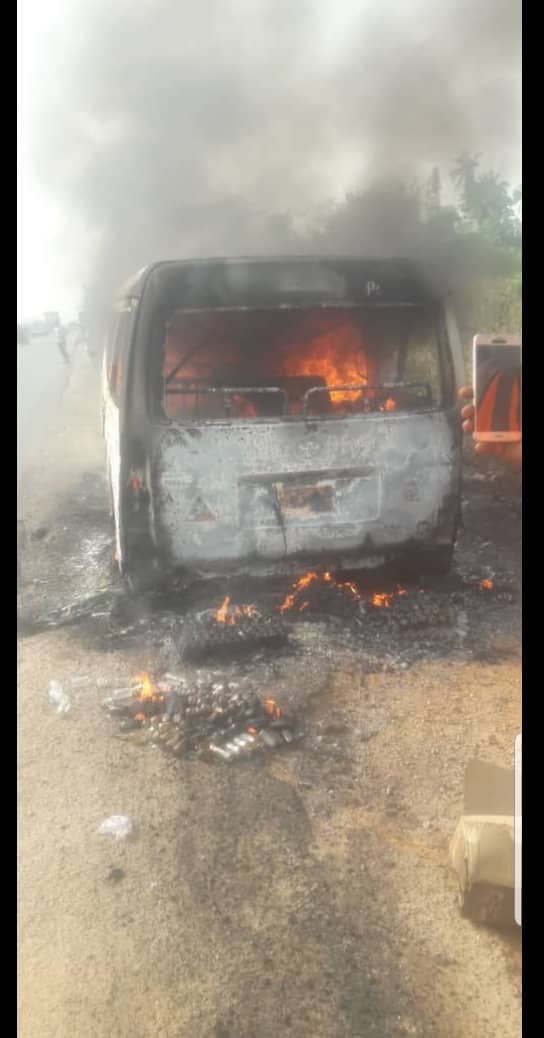