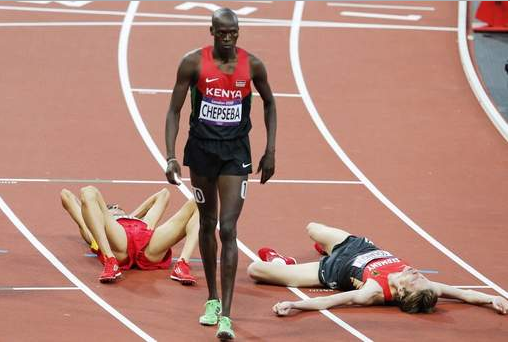 A photo of Kenya’s middle distance runner Nixon Chepseba is about to break the internet for one reason: it raises a historical question.

A photo of the 26-year-old runner at the finish line of one of the stages of his 1500m races at the London 2012 Olympics emerged in the twitverse recently. The picture shows Chepseba flanked on both sides by other racers who were tired and sprawled on the floor after crossing the finish line.

The tweet which carried the caption, “I still wonder how we became slaves,” resonates with many black Africans in the twitverse and they are not hesitating to make comments.

I still wonder how we became slaves pic.twitter.com/2y7MiFJAlt

The fundamental question there is ‘how were the white slave traders able to subdue the black slaves despite their strength as illustrated in the photo.

In response to Malik Ofori’s thought provoking question on twitter, one Elvis who tweets @amirite answered that it was still blaxk people who conquered their fellow compatriots and sold them. it wasn’t really a case of whit subduing black.

See below, other reactions to the photo that has now gathered more than 2000 retweets and several likes.

@amirite91 @malikofori they never said they was gonna use them as slave, they lied and they coerced most people outta their countries

The black ancestors who were slaves were coerced with weapons, while others were victims of treachery. https://t.co/wrPC6kLsHy