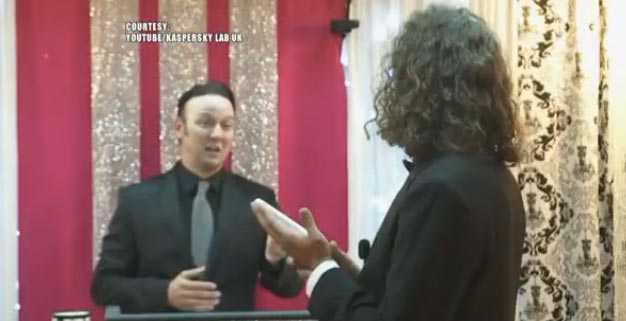 A man has publicly displayed his unending love for his inanimate wife, the iPhone, by marrying the smartphone legally.

The man identified as Aaron Chervenak who is an artist, took the idea of weird marriage to a whole new level when he decided to marry his smartphone.

According to Oddity Central, the man drove from Los Angeles to Las Vegas, Nevada to finally take the love for his smartphone to the next level by marrying it at a small wedding chapel. And he even put a ring on it.

Speaking about the event, Chervenak said: “We look to it for solace, to calm us down, to put us to sleep, to ease our mind, and to me that’s also what a relationship is about.”

“So in a sense, my smartphone has been my longest relationship. That’s why I decided to see what it was like to actually marry a phone.” Chervenak decided to conduct the ceremony in Las Vegas.

He contacted the owner of The Little Las Vegas Chapel  and although he was not only ok with it, the clergy was genuinely excited.

“I’m trying to ask the hard questions of myself as to this relationship and I’m trying to go as far as I can to explore it,” the groom said.

On May 20th, Chervenak put on his tuxedo, took his phone and drove to the The Little Las Vegas Chapel  in his purple Cadillac to get married.

The wedding ceremony was small but very emotional, and you could see the groom was a bit nervous when saying his speech and putting the ring on the phone. “It’s not yet legal to marry smartphones, but what I hope my wedding will do is to somehow act as a symbolic gesture to show just how precious our phones are becoming in our daily lives, and hopefully get other to ask the same question of themselves and their relationships,” Chervenak said.

A study conducted by internet security giant Kaspersky found that a quarter of people ranked their smartphone as more or equally important to them as their parents.

If you live in any of these six states in Nigeria, watch out! Researchers say there may be earthquake there soon,
Trending video: Police brutalise man in Rivers