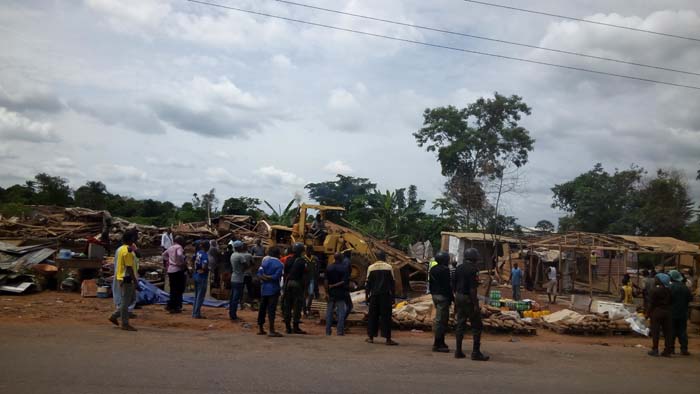 The Ogun State Commissioner for Urban and Physical Planning, Chief Adebola Adeife, has said the government’s task force had demolished over 120 illegal structures and shanties erected along the corridors of the Lagos-Ibadan Expressway.

He disclosed this on Thursday and said the government  would sustain the demolition of of such structures along the highway and other parts of the state.

The commissioner ‎explained that many of the demolished structures at Mowe- Isheri-Kara end of the expressway were a menace to residents.

Adeife said the state government has been inundated with distress calls from the area about alleged cases of sex slavery, robbery and other sundry crimes.

He said, “We received a lot of distress calls that are really affected concerning the issue of sex slavery, robbery and a lot of unnecessary crimes in the area. As a result, we moved in to ensure sanity in the state and to enforce the law that governs urban renewal programme of Governor Ibikunle Amosun.

“Shanties are not good for the state and investment drive of the government. But we are going to sustain the demolition of illegal structures for a very long time. We have inaugurated a task force to go out and look at what needed to be done.”

He reiterated the government’s commitment to relocate traders at Kara Market to Ogere end of the expressway.

He said, “The government has a wonderful plan for the Kara market area. ‎We are spending a lot of money to put in place infrastructure there. When there was a crisis at Mile 12, the traders relocated to Kara but the state government secured an expansive location at Ogere to accommodate them.”

Adeife warned residents against any form of encroachment on government land, especially along the Abeokuta-Siun-Sagamu Expressway where the policy of 1.5km setback on both sides of the highway‎ had been acquired for developmental purposes.

Dasuki ready to drag DSS, EFCC to Supreme Court over denial of freedom after bails
Gender Equality Opportunity Bill I on the move again, I I passed first reading after amendment