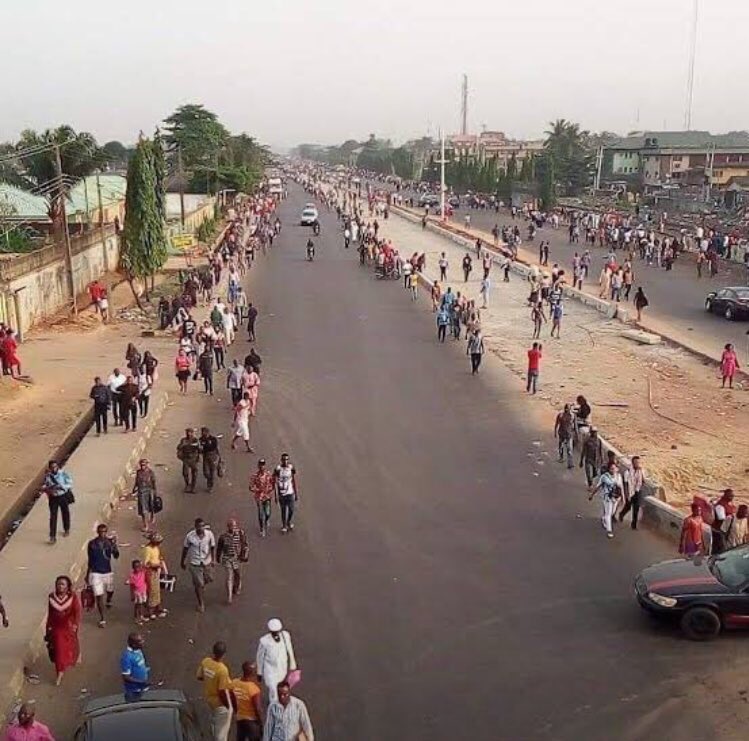 In spite of the ban and restriction of commercial motorcycles (Okada) and tricycles (Keke) by the Lagos State Government, the usual traffic congestion in the metropolis continued on Monday.

Newsmen report that there was no significant difference in the traffic situation in the metropolis, compared to when the operators were not banned.

They also stated that the gridlock along Lagos-Abeokuta Expressway, Agege Motor Road, Oshodi-Isolo and some other parts of the state continued.

The usual gridlock at Iyana-Ipaja, Iyana-Dopemu, Cement, Ile Zik, Ikeja Along, Bolade Oshodi, Under Bridge and other places persisted in spite of the ban and restriction of `Okada’ and `Keke’.

The corridors, which had been known for unrestrained operations of motorcycles and tricycles, were devoid of such operations from Iyana-Ipaja to Oshodi.

The security operatives comprising of  the Police, Anti-Robbery Squad, Lagos State Neighborhood Safety Corps and officers of the Lagos State Traffic Management Authority were on the ground arresting the erring motorists.

Some of the officers chased commercial vehicles flouting traffic laws and regulations along the corridors.

Some of the operatives were armed while others held sticks to clamp down recalcitrant motorcycle and tricycle operators and motorists.

A large number of commuters were stranded at Kola, Ile-Epo, Iyana-Ipaja, Iyana-Dopemu bus stops, seeking vehicles to convey them to their offices on the first working day after the ban and restriction.

MORE READING!  Coronavirus: US hospitals to use blood plasma as treatment

While many were grumbling and complaining over the ban of Okada and Keke in most bus stops, some others resorted to trekking from Iyana-Ipaja to Ikeja and Oshodi.

A commuter, Mr Saheed Raheem, urged the state government to expedite action on the Oshodi-Abule Egba Bus Rapid Transit corridor to reduce the pains of people living in Alimosho.

Raheem said, “Things are no longer the same. Things are not easy for commuters, especially those of us living along this Lagos-Abeokuta Expressway.

“I think the government should have waited until the inauguration of this our BRT here. It would have reduced the stress.

“When I couldn’t get a bus, I started trekking with others to Ikeja.”

Another commuter, who simply identified herself as Mummy Abigail, lamented that nursing mothers, who had to move their children to wherever they go, are facing tough times.

She pleaded with the Lagos State Government to put to use the BRT corridor on Oshodi-Abule Egba.

A trader at Oshodi, Mrs Tosin Adebayo, said the pains created by the ban were huge, urging the government to do more in reducing the plight of commuters.

However, the ban in Surulere, Lagos Mainland and Apapa Local Government Areas ended the usual crowding, loitering and lawlessness of motorcycle and tricycle riders at Costain Roundabout, Ijora, Apapa road, and Ojuelegba.

Some commuters were also seen trekking from Costain to Bode Thomas, Ijora and Oyingbo because of the non-availability of motorcycles and tricycles.

At Oshodi-Isolo Local Council Development Area, the ban and restriction had little or no effect on traffic situation between Oke-Afa and Iyana-Isolo as the usual gridlock persisted and many commuters resorted to trekking.

Also, the usual traffic congestion from Ikotun to Jakande Gate also persisted in spite of the ban.

Newsmen report that the Apapa-Oshodi Expressway, especially from Cele to Mile 2 Bus Stops, known for unrestrained operations of motorcycles, was free on Monday morning.

From Ikorodu-Mile 12-Ketu-Ojota-Maryland-Onipanu-Fadeyi-Ojuelegba-Barracks-Stadium-Alaka, Iponri to Costain, there was total compliance by motorcycles and tricycles and the usual gridlock was not there.

There was, however, shortage of commercial buses at most bus stops as some workers and students resorted to trekking to offices and schools.

Some people who spoke with newsmen around Ojuelegba could not hide their anger, saying that they trekked from Idi Araba, Ijesha and other places in Surulere to Ojuelegba, Yaba, and other nearby places.

A mother of two, who simply identified herself as Mummy AbdulMojid, told newsmen that she trekked with her children from Banire St. to Nathan St., Surulere, a long-distance, to take her children to school, urging the government to look into the ban.

She said the total ban on motorcycles and tricycles in Surulere would affect a lot of people and students, urging the state government to rather restrict their operations.

A student of St Catherine Schools at Ojuelegba, Master Johnson Nwachukwu, told newsmen that he trekked from Lawanson to Ojuelegba because he could not find a tricycle to pick him.

“Most of us are trekking to schools because motorcycles and tricycles have been banned in Surulere, where we reside,’’ he said.

The state government on February 1, commenced enforcement of the extant Transport Sector Reform Law 2018 banning operations of motorcycles and tricycles in some LGAs and LCDAs and restricted them from some highways, bridges, and roads.

Coronavirus: 60 Nigerians stuck in Wuhan, none has contracted the disease – Chinese envoy
Okada/Keke ban: We are in talks with Lagos government – NURTW Chairman