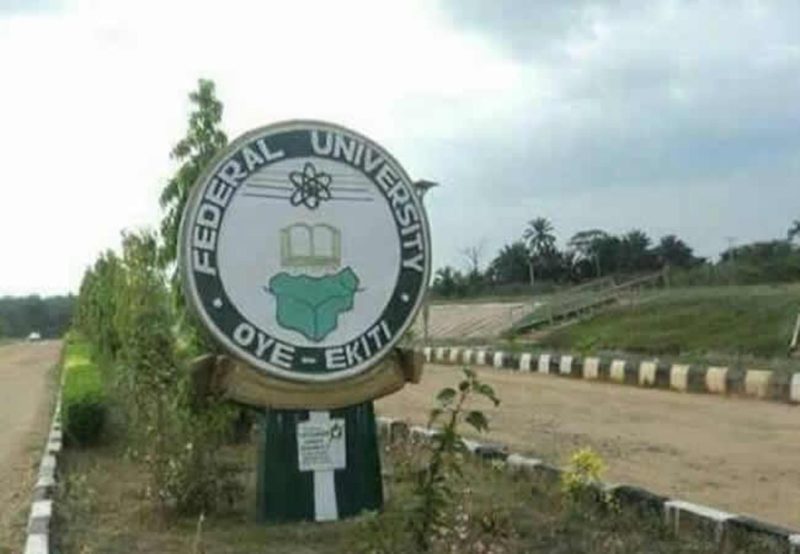 Nigerians on social media are expressing shock and outrage at viral videos showing how police officers were attacking protesting students of the Federal University Oye-Ekiti (FUOYE), in Ekiti State on Tuesday.

WuzupNigeria reports that some students of the university, on Tuesday, staged a protest against the poor power supply in the community.

The protest, however, turned bloody leading to the death of two students while some also sustained injuries and are presently being treated at the Federal Medical Center, Ido-Ekiti.

Wife of Ekiti State Governor, Bisi Fayemi, who was on a tour of council areas in the state, was said to have escaped being attacked by the protesters who reportedly smashed the glasses of some vehicles in her convoy.

Students of the institution and the National Association of Nigerian Students (NANS) have been trading blame with Mrs. Fayemi, accusing her of ordering her security detail to open fire on the protesting students.

The Governor’s wife, on Wednesday, in a statement she personally signed, denied the students’ claims, saying her convoy had left the town before she heard reports that the students were attacked.

One of the victims of the attack, Dada Kehinde, a student of the university, was buried today, in Usi Ekiti.

Some videos of the attack emerged on Twitter on Thursday sparking outrage. In the viral videos, some armed policemen were seen chasing after the students and shooting directly at them.

Since the videos emerged on social media, some outraged Nigerians have been calling for a probe into the incident and justice for the victims of the attack.

Prominent among those who have been calling for justice for the victims is popular advocate against police brutality and convener of the #EndSARS movement, Segun Awosanya, popularly known as Sega.

“The family should reach out. This is not an act of God. The people involved must be brought to book. I would have advised that the coffin be left open so the world can see the crime committed by felons unfit for society ingratiating themselves to power. Justice will be served!”

In the words of a Sage, Murderous Impunity is what you get when an unconstituted authority roams around the state killing students and grandstanding as though above the law of the land. Winnie Mandela went down for less. This won’t go away. #EndImpunity #JusticeForFUOYE https://t.co/xzCAFGGPO4

I still can’t believe some of you are bold enough to try justify the killing of innocent students by the Police officers attached to the First Lady of Ekiti state. If the media can be bought, at least I expect individuals to have some conscience. #JusticeForFUOYE

Often times we have been forsaken by the Government who sees the future of Nigerian students as jeopardy, claiming we are the futures of tmrw, but plans to take away our tmrw, leaving us with just the future. We want our future, we want our tomorrow Secured. #JusticeForFUOYE pic.twitter.com/3m8sMntAZ3

What is the hope for a better Nigeria, if the one meant to protect us are the one’s killing us.

Another day, another future leader down, how many more to go before @MBuhari @PoliceNG and @kfayemi are finally satisfied?#JusticeForFUOYE pic.twitter.com/NjD0cqQBE4

#JusticeForFUOYE
They were not shooting to just scare us to leave or run away they were shooting to kill and they came to my hostel to threaten us to stay indoor or else we will die and nobody will ask them why……… pic.twitter.com/Tl102WSZCd

Nigeria Police Force is supposed to protect the people but reverse is the case. Innocent students are their targets. The police officers must be brought to book.#JusticeForFuoye #Fuoye pic.twitter.com/6p51ZfrkbR

Dada Kehinde been laid to rest by the Federation of Usi students Union members.

We are students and we only want a better life.. We are not terrorists.. Why put an end to our lives?#JusticeForFUOYE #Fuoye pic.twitter.com/O5vFLZPLTG

We have a voice and our voice must be heard and not silenced.
We ask for Justice
We don’t have gun but our voice and tears is all we have.

How on earth would you be shooting at students that are not even cultists o..
Nigeria which way now… Shoriyin ti Buru ni?#JusticeForFuoye #Fuoye pic.twitter.com/4lNp4GxfSy

MORE READING!  Our humanity is under attack
Continue Reading