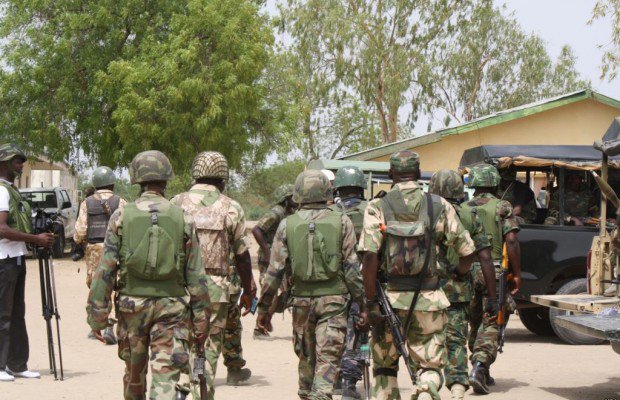 There was pandemonium on Friday in Bilabiri I and II communities in Ekeremor Local Government Area of Bayelsa State following the alleged invasion of the area by armed military.

It was learnt that the military operatives razed several houses and destroyed property as indigenes of the communities fled their homes into the bush to take refuge.

The palace of the monarch of Bilabiri Kingdom, Paul Brakere-Seide, was said to be among buildings burnt down by the rampaging soldiers.

The soldiers were said to be on a manhunt for the suspected “pirates” who killed four Nigerian navy operatives and abducted three foreign sailors on board an oil dredger named MV AMBIKA on January 6 along the Ramos River.

The military invasion, which happened in the early hours of Friday, took members of the communities unawares but many hurriedly fled and abandoned their homes.

The military operatives were said to have stormed the communities in 16 military gunboats and shot sporadically, burning down some selected houses in both communities, including the king’s palace and those of suspected ex-militants.

It could not be confirmed if any arrests were made as calls to the mobile phone of the spokesman for the Joint Task Force in the Niger Delta codenamed Operation Delta Safe, Major John Unuakhalu, did not connect.

Also, the spokesman for the 16 Brigade, Nigerian Army, Yenagoa, Major Jonah Danjuma, could not answer call to his mobile phone. He had yet to reply to a text message by our correspondent as of the time of filing this report.

An eyewitness said the operation lasted over three hours but no life was lost and no arrests were made.

The monarch of Bilabiri Kingdom, who confirmed the military onslaught, said he also ran into the bush for the safety of his life.

“We were all in my palace this morning when some of my subjects ran to me to inform me about military presence and asked us to run but I told him that I cannot leave my palace, but they pressurized me to run, that they (the military operatives) were in over 16 military gunboats at the waterside.

“As soon as I left my palace, they came and burnt down my palace into ashes and that of my younger brother. They did not arrest anybody or left any message. I have returned to my community to meet my palace burnt to ashes.“

The chairman of Bilabiri I Community Development Community, Esau Darosha, in a Save Our Soul message, called on government to intervene and prevail on the military to stop harassing the communities and displacing innocent indigenes.

The military attack occurred two days after the leadership of Bilabiri II community had pledged its readiness to assist security agencies to fish out the suspects who killed the four naval personnel and kidnapped three foreign nationals on January 6.

In a statement on Wednesday by Darosha and the deputy paramount ruler, Isaiah Couple, the community stated that the people would not habour criminal elements.

They also raised the alarm that a syndicate was going about impersonating the monarch of the kingdom and peddling “false and concocted information to the military and general public.”

“We want to assure the military of maximum cooperation to locate and bring to book the perpetrators of this heinous crime. We as a community will not condone the atrocities of disgruntled elements to avoid a repeat. We further restate our cordial relationship with the Nigeria military and all other security agencies.

“However, it has come to the knowledge of the leadership community that that there is a syndicate impersonating the monarch of Bilabiri Kingdom with the malacious intent to blackmail the community over the killing of military personnel,” they said.

Continue Reading
You may also like...
Related Topics:Military, Soldiers

Yes, I was tried, But I’ve been cleared, says Omo-Agege
PDP blackmails judiciary to get favour in Sokoto, Bauchi, others -Oshiomhole