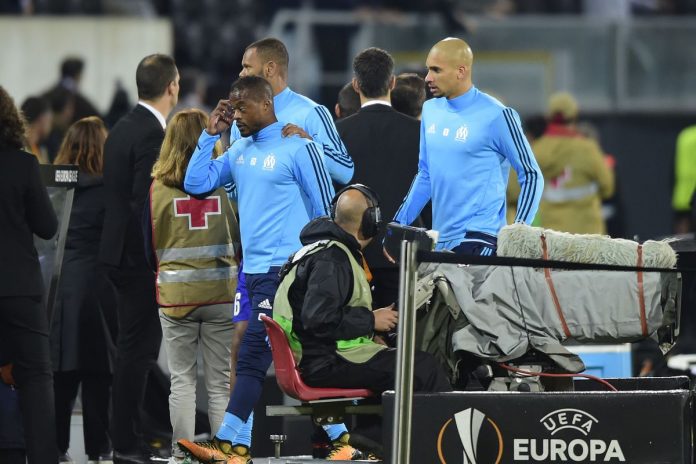 Marseille defender Patrice Evra has been suspended from all UEFA games until June 2018 for kicking one of his own team’s fans before a Europa League game, UEFA said Friday.

Evra got into a verbal argument with Marseille supporters before the match against Portuguese club Vitoria on November 2. He then aimed a kick at the head of one of the Marseille fans before being ushered away by a teammate.

The 36-year-old France defender was sent off before the game.

Marseille, which has opened its own internal investigation into the incident, said in a statement shortly after UEFA’s announcement that it has ended Evra’s contract with” immediate effect.”

Evra committed an “irreparable” act by “responding to the disgraceful provocations of a handful of individuals,” the club said on its website, adding the decision was taken by ”mutual consent.”

Marseille said it intended to punish fans for the type of misconduct they showed toward Evra but did not specify whether it would punish those who had insulted the former France defender.

Marseille is well-known for having a powerful fan base that can exert pressure on the club and players alike.

“There’s a lot of sadness today. First of all for Patrice Evra, who has obviously understood all the consequences of his actions and that he can no longer fulfill his passion (of playing) for Marseille,” club president Jacques-Henri Eyraud said. ”For Marseille fans, too, who are stigmatized by the irresponsible behaviour of a handful of them.”

Before last Sunday’s home game against Caen, fans made it clear to Evra he was no longer welcome at the club, holding aloft two banners criticizing the player before the match at Stade Velodrome.

“This Game Is Over,” read one banner in English, mocking Evra’s regular posts on social media where he films himself talking about soccer and says “I love this game” as he breaks into laughter.

Former European Cup champion Marseille, the only French club to win the Champions League, was also charged with invasion of the field by its fans, setting off fireworks, and acts of damages. It must pay Vitoria 25,000 euros ($29,000) within 30 days.

Continue Reading
You may also like...
Related Topics:Patrice Evra