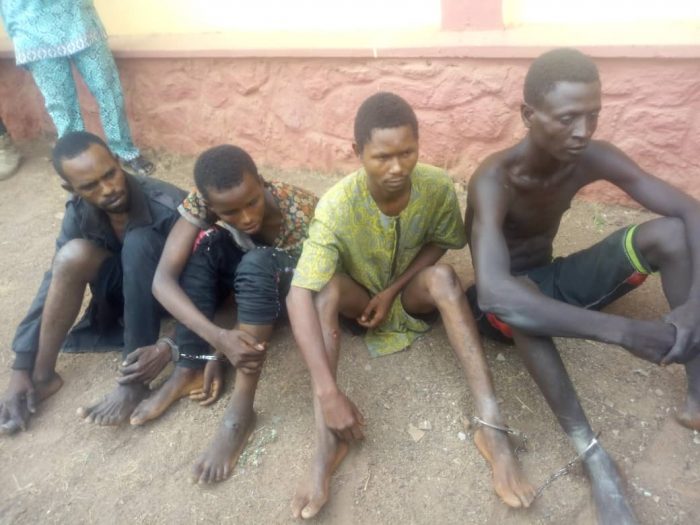 The Police in Ogun on Friday paraded four suspected kidnappers who abducted a member of the Local Government Transition Committee, inaugurated by Governor Dapo Abiodun recently.

The suspects were paraded at the State headquarters of the Police at Eleweran, Abeokuta, Ogun State.

The arrest was as a result of the alleged kidnap of a member of the committee, representing Remo North Local Government, Soniyi Taiwo along Fidiwo-Ipara road while coming from an outing.

State Commissioner of Police, Kenneth Ebrimson revealed that “on receiving the information, he directed the DPO of Isara Division to work in conjunction with other tactical teams in the command to ensure the rescue of the victim.”

According to him, “In compliance with my directive, the team swung into action and embarked on a technical and forensic investigation as a result of which the kidnappers were quickly geo-located”.

“Having realised that the police are closing in on them, the hoodlums released their victim but three members of the gang were subsequently apprehended as a result of intense combing of the bush where they were traced to. Their arrest led to the arrest of the fourth suspect who was tracked to Idi-Ayunre in Ibadan.”

The CP, however, sent a note of warning to all would be criminals to either have a rethink or relocate from Ogun State.

He added that their refusal would lead to their total destruction, because the command would be taking the battle to their door step.

The suspects, identified as Muhammad Addullah (25), Ibrahim Diko (20), Gambo Abdullah (25) and Mohammed Sulaimon (23) all denied the allegation when interrogated by newsmen.

In a separate interview, the victim identified all the suspects as his abductors, adding that he was still traumatized by the sight of his abductors.