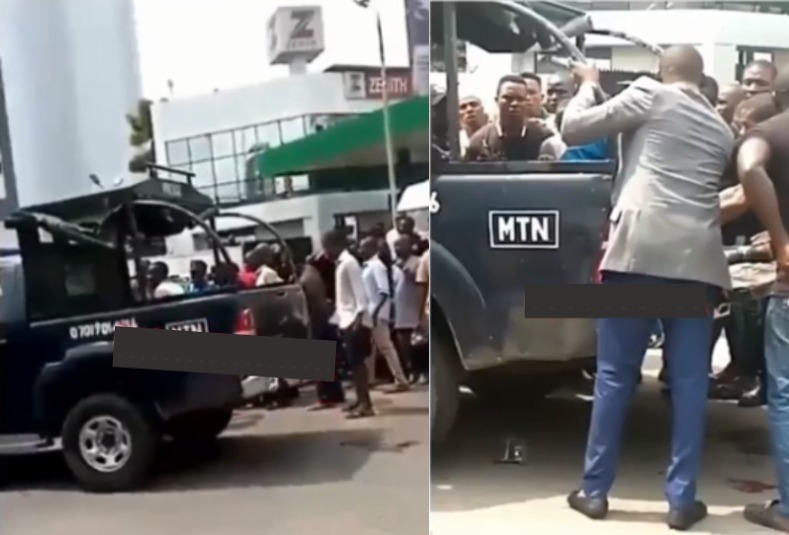 Two suspected armed robbers, on Thursday, reportedly shot a policeman and a motorcycle rider around Falomo roundabout in Ikoyi area of  Lagos.

According to eyewitnesses, the two robbers were trying to hijack a bag full of money from a customer who was said to be coming out of a bank around the area when the policeman tried to intervene.

It was gathered that the policeman was shot while trying to retrieve his rifle to challenge the robbers, while the okada rider was hit by a stray bullet from the robbers who escaped on a motorcycle.

While some social media users claimed the two victims died, we are yet to authenticate this claim.

Meanwhile, a video of police officers and other passersby making efforts to rescue the victims from the scene is presently making the rounds on social media.

Some Twitter users who were at the robbery scene took to the microblogging site to share the story.

READ ALSO: Landlord destroys tenant’s property over unpaid rent, only to discover his daughter had been spending it [Photos]

Robbery just happened at zenith bank falomo inside that forte oil, Awolowo, Ikoyi!! Gunshots! The guys escaped on bike. A policeman and a young guy were shot! Please be safe! #festiveperiod

2 armed robbers took someone’s bag (full of money) close to F.O (Falomo)!! Police came, and one the robbers brought out a pistol & shot the police in his chest!!!! 30 mins ago!!! My awolowo road boy just told me that I even know the police guy!! Sad day

I just witness a live robbery on ikoyi falomo bridge, he was on a bike with a pistol! I should have push him with the car but I got confused what if he didn’t die or fall?