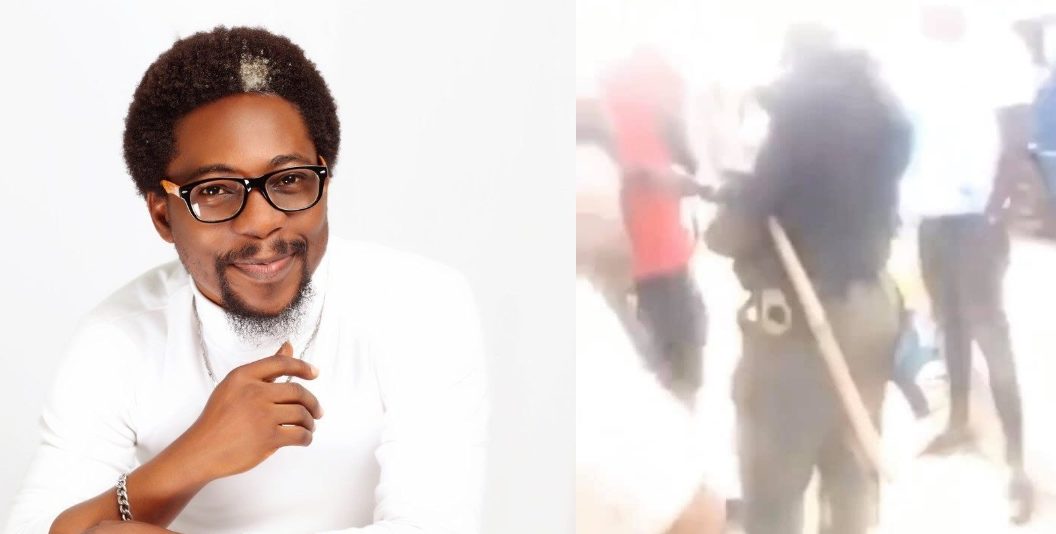 Popular rights advocate and #EndSARS campaigner, Segun Awosanya popularly known as Segalink, has described as false the narrative behind a viral video of some police officers allegedly holding Point of Sale (PoS) machine and demanding the ATM card of a passenger.

A Nigerian lady had shared a video on Twitter showing some persons in Police uniform captured, allegedly with PoS machine and demanding ATM card from a bus passenger at a checkpoint.

“A police officer seen with POS, asking a passenger to bring his ATM card.”

Reacting to the viral video, the Nigerian Police Force, last Friday, said it had commenced an investigation to unravel the authenticity of the video.

Segalink, however, said claims that the officers were demanding ATM card from a passenger with an attempt to extort him is not true.

He said the officers seen in the video were searching the passengers after the driver drove them to the checkpoint over claims that they were fighting over a missing ATM card.

Segalink said the man seen in the viral video ranting while talking to the police officers was later identified as the suspect who stole the ATM card.

He revealed this while reacting to a tweet from a man lambasting the police force over the alleged killing of a mechanic by policemen in Port Harcourt, Rivers State.

“This is not all on the Police Distinguished. We have had many cases where an alarm is raised and officers involved got held in custody without witnesses or petitioners showing up. How do you expect justice to be served without material witnesses willing to testify?

“We can all recall the case of highway @PoliceNG alleged to have made demands for ATM cards with a POS as posted by one lady online. The @PoliceNG_CRU invited the officers and their DPO to Abuja. The lady is yet to substantiate her narrative. The actual case was entirely different.

“An ATM card was reported to have been stolen in a commercial bus. Fight broke out and the driver took them all to the nearest police checkpoint. The officers there demanded that everyone should bring out their ATM cards and identify themselves with it. Proof of ownership.

“There weren’t any POS in the shot of that video. The passengers were simply asked as alleged to call out the name on the ATM card on each person. The fellow making trouble was the suspect. They later found the stolen ATM card hidden under the guy’s seat in the bus.

“Online, the narrative given was different and it simply fulfilled the intent of the poser. She is now using the attention to sell her shoes while ignoring the calls of the @PoliceNG_CRU to substantiate her claim in the post. This kind of attitude discourages follow up on claims.”

This is not all on the Police Distinguished. We have had many cases where an alarm is raised and officers involved got held in custody without witnesses or petitioners showing up. How do you expect justice to be served without material witnesses willing to testify? 🤔 https://t.co/uw0D2VSmJ3