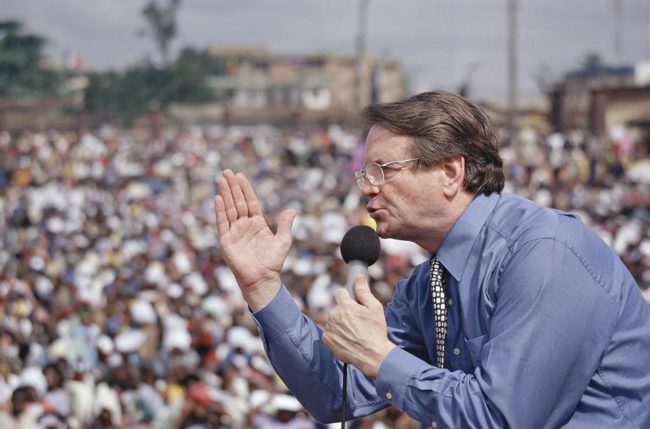 Renowned German Pentecostal evangelist, Reinhard Bonnke, has died at the age of 79.

Popularly known for his gospel missions throughout Africa, Bonnke passed away peacefully, surrounded by his family, on Saturday, December 7, a statement on his official Facebook page said.

The announcement of his demise published on his Facebook page read:

“It is with sorrow that the Bonnke Family would like to announce the passing of our beloved husband, father, and grandfather, Evangelist Reinhard Bonnke.

“He passed away peacefully, surrounded by his family, on December 7, 2019.

“For the past 60 years he has preached the glorious Gospel of Jesus throughout the entire world. We want to thank you on behalf of him and our family, for your kind love and unwavering support, which enabled him to preach the matchless message of salvation to countless people,” the statement read.

Bonnke is a well-known figure in Nigeria. In 1991, during Bonnke’s visit to Kano, northwest Nigeria, caused riots in the city as some Muslims protested over remarks he had reportedly made about Islam in the Kaduna.

He, however, returned to preach in Nigeria nine years after the incident.

In November 2017, he was in Nigeria again for what he described as his ‘farewell crusade’ where he also introduced his successor, Evangelist Daniel Kolenda to Nigerians.