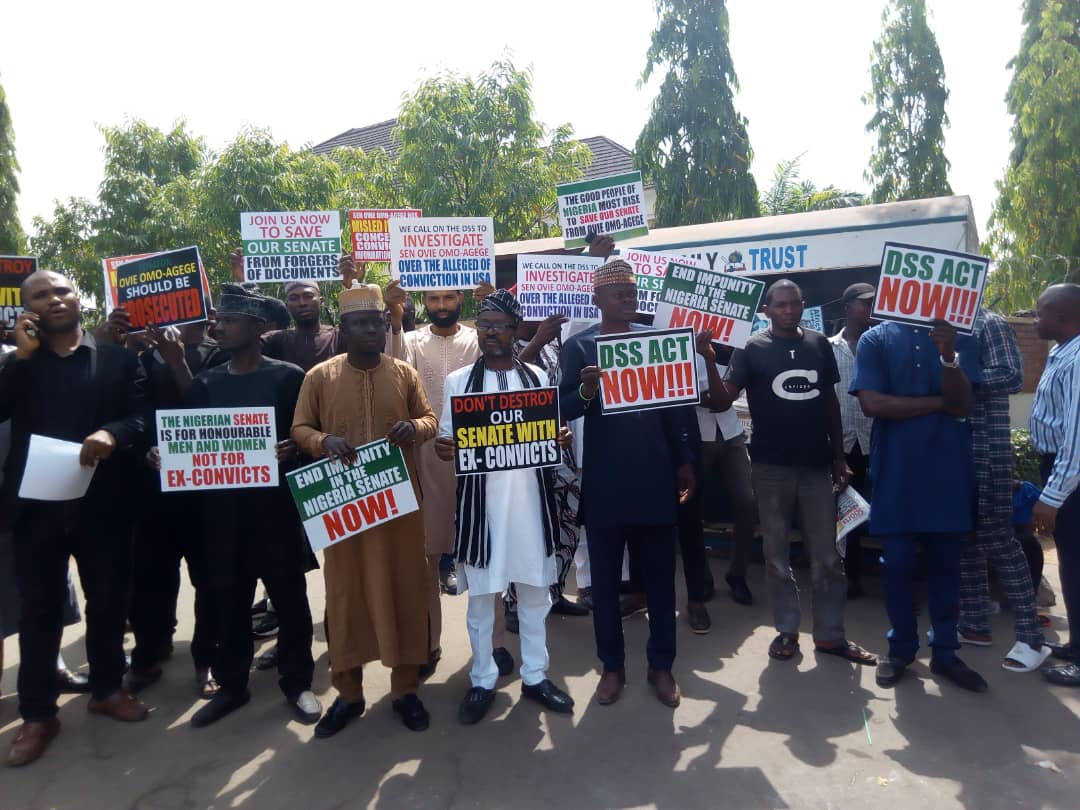 A coalition of over 500 protesters on Friday stormed the Headquarters of Department of State Services in Abuja demanding the prosecution of the Deputy Senate President, Ovie Omo-Agege over alleged conviction for perjury in the United States, by the State Bar Court of the State of California, Los Angeles in 1996.

The protest followed the expiration of the 72 hours ultimatum within which Omo-Agege should resign, and the Delta Central Senatorial District seat declared vacant within 72 hours or face multiple protests.

The coalition said their demand was necessitated by “available information that gave credence to the fact that Ovie Omo-Agege was numerously convicted by The State Bar Court of the State of California, Los Angeles, USA and he served jail term.”

SATURDAY PUNCH reported that the spokesperson of the groups and Convener, Coalition of Civil Society and Youth Groups in Nigeria and National Coordinator, Empowerment for Unemployed Youths Initiative, Solomon Adodo, had at a press briefing in Abuja insisted that such willful silence contravened the provisions of the Nigerian constitution and rules of the Senate.

He had said, “The law enforcement agencies should immediately initiate fresh prosecution against Ovie Omo-Agege for the grievous offence of perjury and denigration of the Nigerian Constitution. In the event that immediate actions are not taken within 72 hours of this notice, we shall be left with no other option than to mobilize thousands of civil society and youth groups to occupy the National Assembly until she is purged of corrupt elements. We shall maintain eternal vigilance and remain in defense of the Nigerian democratic system.”

But Omo Agege had in his response sent to our correspondent by his Special Adviser (Media and Publicity), Yomi Odunuga said he had been cleared of all charges in the said case and was never a convict in the USA as being alleged.

“The fact is, at a point in his brilliant and bright legal career in California, USA, Senator Omo-Agege then a young attorney, was alleged to have broken the law in California but in the end, he was found not guilty”, Odunuga stated.

On Friday, Adodo led the protesters to the DSS Headquarters in Abuja demanding the investigation of the DSP over alleged multiple perjury.

The protesters in the protest letter which was received by a senior official of the DSS on behalf of its Director-General, Yusuf Bichi, said available information before the coalition, indicated that “in 1998, Augustine Ovie Omo-agege was suspended from the practice of law with probation for three years by the Supreme Court of the State of California, having been convicted for forgery of checks on March 7, 1992  in violation of Penal Code section 470.”

Apart from Adodo, other signatories in the letter to the DSS were Danesi Momoh (Guardians of Democracy and Development); Khalifa Bello Adamu (Partners for Legislative Agenda for Nigeria); Edwin Olorunfemi (Centre for Policy Advocacy and Leadership Development); Mallam Balarabe Musa (Arewa Youth for Peace and Security) and Jacob Okpanachi (Civil Society Advocacy Group for Accountability and Probity).

The letter reads, “The Guardians of Democracy and Development, Partners for Legislative Agenda for Nigeria, Empowerment for Unemployed Youth Initiative and our partners under the Coalition of Civil Society and Youth Groups in Nigeria herein call for a thorough investigation of the Deputy President of the Senate, Senator Augustine Ovie Omo-Agege, owing to available information that gave credence to the fact that Ovie Omo-Agege was numerously convicted by The State Bar Court of the State of California, Los Angeles, USA and he served jail term.”

Other crimes of the DSP, the coalition said, were offences of serial perjury in the application for Driver’s License in violation of Penal Code 118, in 1993.“

“On March 7, 1993 in the county of Los Angeles, Omo-Agege committed the crime of perjury-Application for driver’s licence in violation of Penal code 118, a felony where he lied that he never applied for California Driver’s Licence or Identification Card when in fact he had applied and had been issued under the name Augustine Omo-Agege”, the letter to the DSS alleged.