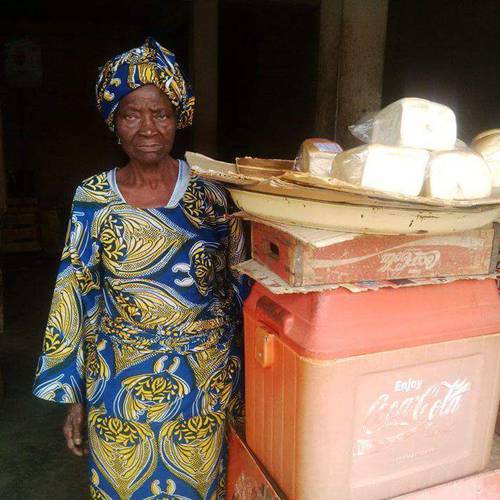 Eighty-year-old Alhaja Sikiratu Yekini, mother of late Super Eagles striker, Rashidi Yekini, clears the air on life after her son’s death, in this interview with Punch in Ijagbo, Kwara State

How has life been with you since your son, Rashidi, died four years ago?

I have been managing. It has not been easy at all. Since he died, I have not had substantial support. I have been surviving on the rent I collect from the house Rashidi built for me as well as the proceeds from my petty trade.  As you can see here, I sell bread, biscuits and some other household cooking materials. I use the rent to do some little repairs on the house and also to find at least a meal a day or more depending on what the day brings.

How much do you collect from this house as rent per annum?

We have five flats in this house. I use one flat, my surviving son, Akeem, and his family use one flat while I rented out the remaining three flats. This is almost a remote area. It is not like Abuja, Lagos or even Ilorin where you can collect substantial amount for rent. The tenants were paying N30,000 per annum but I just increased it to N45,000 per annum this year.  That means that prior to this year, I was collecting only N90,000 per annum from the three flats.

But Yekini’s lawyer said you collect about N500,000 from rent yearly…

The lawyer is not being truthful. He is maligning me, and stopping people from assisting me through his statements. Since my son died, if people have given money to the lawyer for me, he has not given me. It is only now, due to media publicity, that people started helping me.

What other thing did Yekini do for you when he was alive?

He bought this two-storied building for me. He also built a house in our hometown, Iraa, in Kwara  State. He had the habit of going to Iraa and giving everybody there some money.  But since he died, there is no hope. He was the only person in the family that was wealthy. I cannot forget my son.

Has there been support from the government and the Nigerian Football Federation to you or the family?

During Rashidi’s one year memorial anniversary, Osun and Oyo states’ governments gave money to his wives and children. Osun State gave his wives N2m and Oyo gave N2m as well. The Kwara State Government made a promise but it has not been fulfilled. Some people recently started helping me.  There is a group from Abuja that opened a bank account for me. Some money has been paid in for me. Also, Yinka Ayefele recently sent a delegation to me. He read about my ordeal in the papers and he was touched and sent people to ask me what my needs were. I told them. Also, Chief Donatus Agu-Ejidike was touched after learning of my story. He came here and gave me N100,000. Some weeks ago, the wife of the Kwara State Governor, Mrs. Omolewa Ahmed, sent a delegation and they gave me clothes, food, beverages and some cash.  I am grateful to them. May God reward them but I still need more.

Are you saying the NFF has not assisted you or the family since Yekini died?

They have not done anything.  If government or people have been giving Yekini’s lawyer (Jibril Olanrewaju) in Ibadan, things to give me, he has not been sending them to me.  I am not aware that NFF has given any money to the family since my son died.

Is it poverty that made you to start selling bread?

Poverty is one of the reasons. I want to make money. I may buy bread at N300; when I sell at N350, I make N50 profit, which I use to survive. I do not want to stay idle.  I am selling bread to make money, so that I won’t die early.

How long have you been selling bread and other petty items?

Since my son died in 2012, there was nothing else for me to survive on, so I started selling bread. I was not selling bread when Rashidi was alive; I started this business because of hardship.

What do you want the government, NFF, corporate organisations, groups and individuals to do for you?

If they can assist me with money, I will appreciate it. I plead with President Muhammadu Buhari, the NFF, state governments and everyone to assist me. They should remember that my son made Nigeria proud. They should not abandon me now that he is no more and I am now an old woman. When my son was alive, he was always there for me. If Nigeria helps me, God will bless the country more.

How often do you go to hospital for checkup and treatment?

When my son was alive, he had a doctor that used to come to the house and treat me but after his death, there was none. However,  people from Offa came in April. They gave me a doctor who has been treating and checking me monthly. They are responsible for the medical bills.

How are Yekini’s children and family faring?

My son married two wives; one is  Mariama and the other is Adeola. They gave birth each to a girl. The first wife gave birth to her daughter in London. The name of the girl is Yemi (Yemisi). The other daughter, Bidemi (Omoyemi), from the second wife, is schooling at the University of Ilorin. The last time when we did the memorial of my son, we requested that the children should be given scholarships. I pray the government does that for them.

Why are you staying at Ijagbo and not Iraa, Yekini’s hometown?

I gave birth to my children in Kaduna. When I was at Iraa, I had family problems; family members used to disturb me. That is why I told Rashidi to provide a house for me at Offa or Ijagbo, so that the family will leave me to enjoy my life. If I had not been staying at Ijagbo, I would have died a long time ago. That is why my son built this house for me here in Ijagbo.

Wall Street Journal is saying Buhari is Nigeria’s problem, see why
[VIDEO] Stop waiting for America to help solve the Boko Haram crisis, black West Africa is not a priority