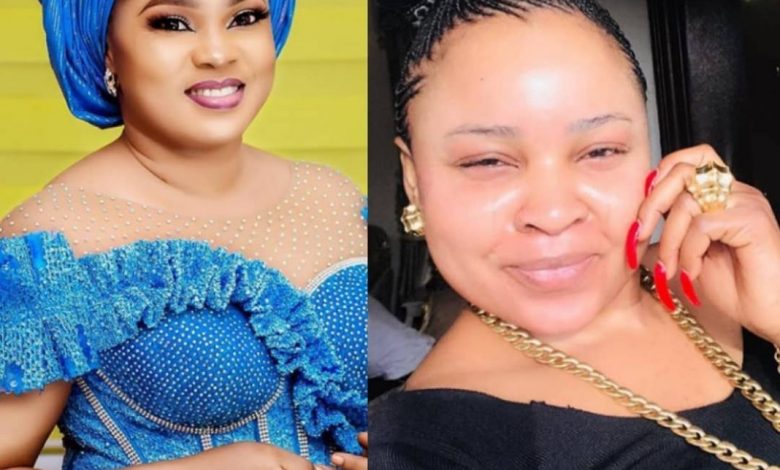 Nollywood actresses, Bimbo Afolayan and Regina Chukwu who once had an enviable friendship are now alleged sworn enemies.

The beautiful actors, who have both carved a niche for themselves in their chosen profession, became the envy of all when Regina Chukwu started glowing, her skin blossomed and many of her fans and followers on Instagram asked what she was using.

With all innocence of heart, she started telling everyone who cared to listen that it was Bimbo Afolayan’s range of cosmetic products that was the secret.

That was a plus for these products and Bimbo (nee Ogunowo) became a go-to for such body products.

The business boomed and Bimbo Afolayan, who was still single then (2017) raked millions to the bank.

Having Regina Chukwu as an influencer was all she needed to break even.

In fact, Bimbo took to Instagram to narrate how she started her business and how she wasn’t succeeding.

The actress, who later got married to movie director, Okiki Afolayan, confessed that she was not getting the patronage to boost her sales.

According to her, she spoke with Regina Chukwu, a widow and mother of two teenagers, and help surfaced. Regina, who was then deeply enmeshed in movie making, was willing to help a colleague in need.

Bimbo confessed that Regina started helping her to advertise the products and this drew customers because Regina really glowed.

This went on for a while and Bimbo kept smiling to the bank.

Suddenly, there was a dull in the ‘advertising’ posts.

Regina, who was also a friend to Adediwura Adeseigha and Liz Dasilva, ignored all Bimbo’s posts, refused to click the Like button(which she was doing with delight before) and there were no more mentions of the products she was using on her skin.

Then, it was her (Regina’s) birthday and Bimbo sent a birthday shout-out. Of course, it was ignored and Okiki’s wife, who had started making noise about her then fiancé and their forthcoming wedding, shared a post, asking Regina’s children to help wish their mum a happy birthday.

Though the ‘birthday shout-out’ episode seemed resolved after a while, the last straw that broke the camel’s back to the cherished friendship was when Regina made a debut of her skincare products!

Without any explanation of what transpired between her and Bimbo, Regina started a rigorous campaign of her products and started employing all strategies that Bimbo employed in marketing her products—giveaways, putting up selfies, writing short stories on her products and distributing money to followers.

This marked the beginning of the unending war between the two friends, they stopped talking to each other.

“Well that might not be the real reason,” a source told Kemi Ashefon.

According to sources, Okiki Afolayan, who was (and is still) loved by many in the industry was a good friend of Regina Chukwu.

“When Okiki and Bimbo started dating, not many knew it would lead to marriage. But it did and to the amazement of all, the couple had a fantastic wedding. Of course, Regina congratulated them before and during the wedding. Maybe she got angry that she wasn’t carried along by her friend, Bimbo and she decided to maintain her lane.”