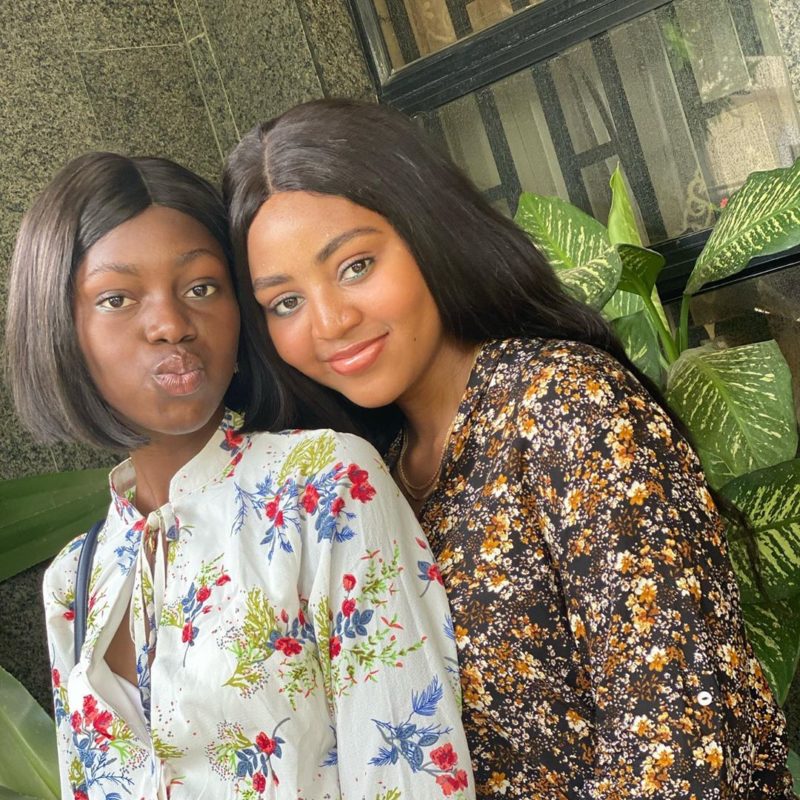 Popular actress Regina Daniels-Nwoko’s younger sister, Destiny Daniels has taken to her Instagram page to brag about her beauty.

The dark-skinned Teenager shared photos of herself adorned in ripped denim bum shorts and sleeveless white top posing in front of a Benz.

Destiny had to resound her beauty by claiming she is more attractive in person.

“Finer in person 🥰 You will see when we meet ❗️
#pleasestaysafe“ 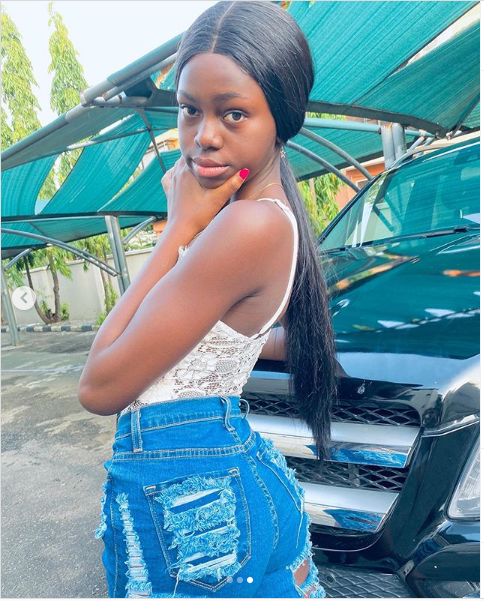 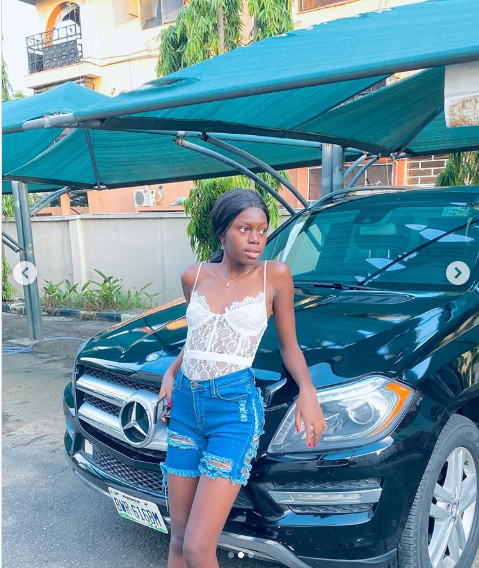 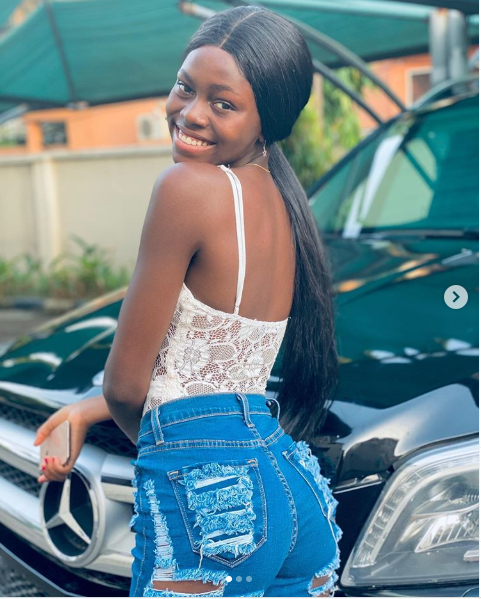 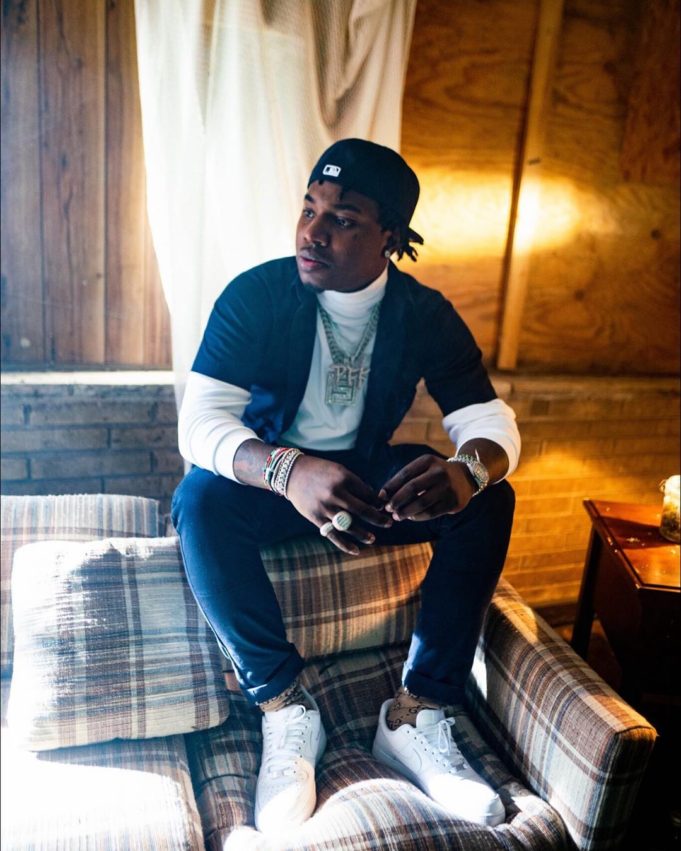 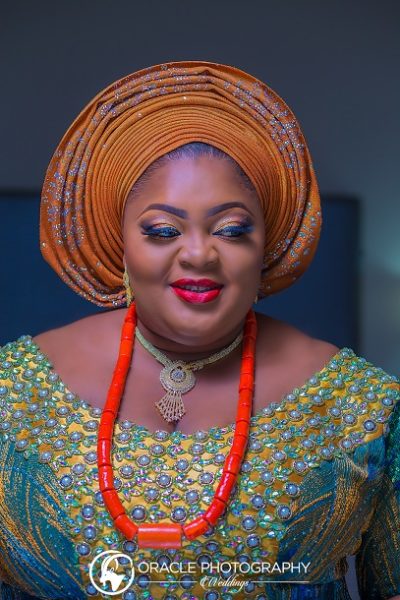 Nollywood actress and movie producer, Eniola Badmus has disclosed in an interview she said that she does not want to be fat and unhealthy.

Although Eniola is someone who has always been proud of being a plus-size and never allowed her size to slow down her style, she has disclosed that her goal is to remain chubby, sexy, and healthy.

When asked if and why she wants to lose weight, the 42-year-old said “I didn’t initially decide to go on a weight loss journey; it chose me.

“It all started when I put up a post a while back about weight loss companies using slim people to promote their products and services.”

“I told them to use me if truly their products work. A lot of them picked up the challenge but I was able to settle with the ‘deshapeables’. I decided to work with them because I like their plan and I hope it would work. “

The dark-skinned talented tv goddess also mentioned that if she is not scared if her weight loss would affect her fame.

According to her, she does not plan to go slim. In her words “In fairness, I really can’t tell if losing weight would help my brand because with or without losing weight, I’m Eniola Badmus. If this works, people would just see the new body on me”.

“However, it’s not going to be a total transformation because I still want to be a chubby girl; not slim. The goal is to be chubby but sexier.”

“Maybe like losing three sizes. People should not think that I would be a shadow of who they know. I’m only doing this because I want to. No matter how much we shout about body positivity, one would still have to be on a diet. One would have to watch what one eats and exercise.”

“I don’t want to be plus-size and unhealthy. I might not work-out like fitness enthusiasts but I try to keep fit. For clarity’s sake, I didn’t and don’t bend to societal pressure. I have very thick skin and like to do whatever suites me at any particular time. The idea is to see what I would look like afterward. There are some clothes I feel like wearing but can’t wear them till I lose weight. I still belong to the ‘fat girls association”.

MORE READING!  People believe that my boobs are too big to be real-Ada la Pinky
Continue Reading 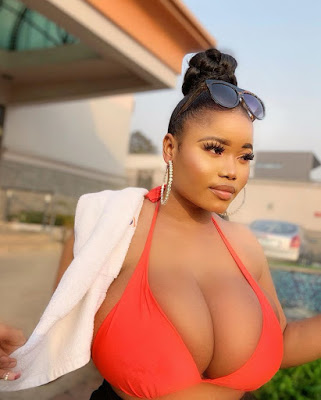 In an interview, Ada said, “People believe that my boobs are too big to be real but they are 100 percent natural. I have never done any surgery to make my boobs bigger. I used to be skinny a few years back until I began to gain weight. As I grew bigger, My boobs grew. If one gains weight, every part of one’s body would become bigger.”

Recalling how she started her entertainment career as a dancer before delving into comedy, she said, “I started my career as a dancer and video vixen with the help of Clarence Peters. However, when I started gaining weight, I could no longer continue being a vixen. I felt I didn’t fit in anymore because of my size, so I decided to switch to comedy. My life has always been about entertaining people. I realized I had to do something better, hence I switched to comedy.”

MORE READING!  I was almost raped in my final year, Eniola Badmus reveals

When asked about her relationship with another online comedian, Adebayo Abidemi, popularly known as Isbae_U, who she regularly appears in skits with, she simply said, “You will know. That’s all I have to say in response to this question.”

On the biggest lesson she has learnt as an entertainer, she said, “The biggest lesson I’ve learnt is that people really change when they have fame. Fame gets into people’s heads and they become proud and act in ways they didn’t before. I just pray that doesn’t happen to me.”

The busty comedienne also noted that she had never got anything for free on account of her fame. “I have never used my fame to get anything for free. As a matter of fact, the reverse is the case because I even give out. I feel I have been blessed, so I should also be a blessing to others,” she added.