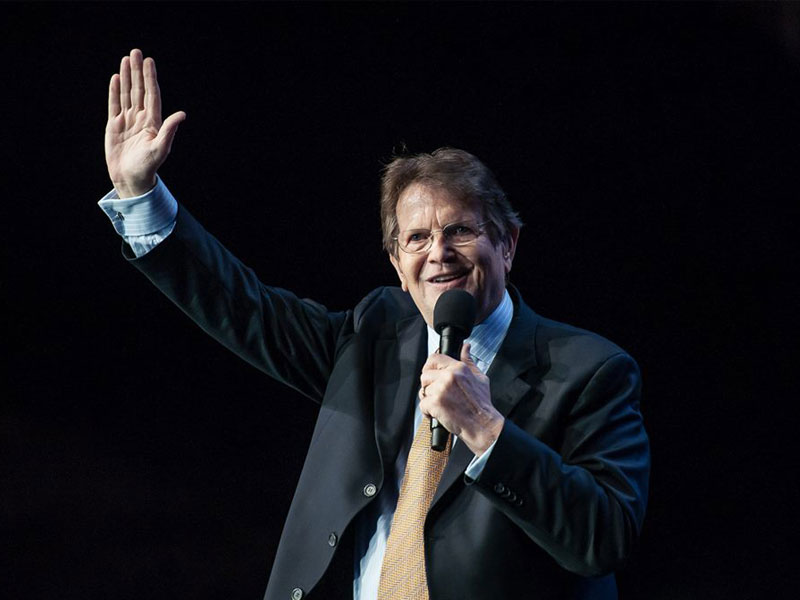 President Muhammadu Buhari has joined others around the world to mourn the demise of renowned German Evangelist Reinhard Bonnke, who died at 79 years.

Buhari described Bonnke’s demise as a great loss to Nigeria, Africa and the entire world.

The president’s condolence message was contained in a statement issued by his Special Adviser on Media and Publicity, Mr Femi Adesina, in Abuja on Saturday.

President Buhari condoled with the government and people of Germany, family and friends of the great preacher and teacher of the Bible, and all his co-labourers in the vineyard.

He prayed that the Lord would comfort all those that mourn him.

Buhari said that Bonnke’s crusades in Nigeria, across Africa and the globe strongly accentuated the message of Jesus Christ.

The Nigerian leader added that Bonnke’s vision and zeal for the salvation of souls helped the world in understanding the power of love and kindness.

The president prayed that the Almighty God would accept the soul of the departed preacher.

He hoped that Bonnke’s legendary contributions to the body of Christ in teaching and writing would be remembered by posterity.

Prominent church leaders also paid glowing tributes to renowned German preacher and founder of Christ For All Nations (CFAN) whose last crusade in Africa, which he claimed God specially instructed him to hold in Lagos, was in 2017 on the Lagos-Ibadan expressway.

National President of the Christian Association of Nigeria (CAN), Rev. Samson Ayokunle, in a statement by his Special Assistant on Media & Communications, Pastor Bayo Oladeji, described Bonnke as “one of the greatest generals of the gospel of eternal salvation through our Lord Jesus Christ on earth.

“CAN and the entire Christian communities in Nigeria join the rest of Christians all over the world to mourn this fiery preacher and teacher of the Gospel and mentor to several evangelical leaders all around the world today.”

“He had an undying passion for Christ and souls. Since his first crusade in 1985 in Lagos, he has never looked back. He would do anything to win souls for God.

“He lived well. The Lord sent him with a message which he delivered so well and hard. He was easily the greatest ever crusader in Africa.”

“You affected me so much with your radical passion for evangelism. You finished your assignment and in your lifetime handed over to your successor. Rest in peace sir,” he tweeted.

President of Abraham Evangelistic Ministries (AEM), Bishop Abraham Olaleye, who was the chairman of the mobilisation committee for the 2017 crusade, described the deceased as a man with “unquenchable fire for God and souls.”

“He had a passion for souls that he would never trade for anything. He saw the vision of a blood-washed Africa, which he struck to for years.”

The Senior Pastor, Christ Living Apostolic Ministries (CLAM), Apostle Wole Oladiyun, said Bonkke was a great man of God who had lived his life for Christ and “specialised in visiting Africa for evangelism work. I hope African pastors will emulate all his works.”

“I’ve been reading his books for a long time, he has impacted so much in the lives of people. He spent his spiritual and financial resources for mission works, may his soul rest in peace.”

In his tribute, Rev Victor Basola said the late evangelist “was a light to the continent of Africa. The story of the emancipation of Africa from the shackles of darkness cannot be written without mentioning his name.