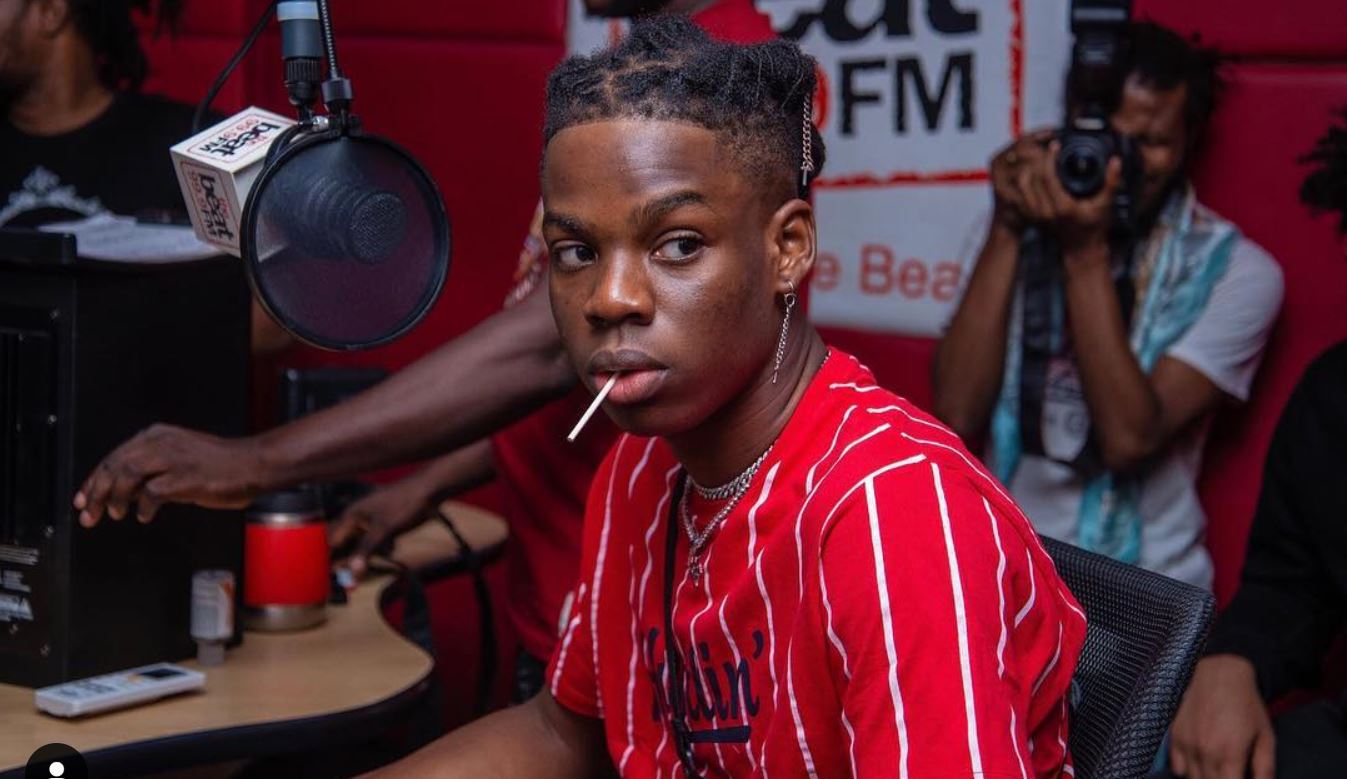 Some music enthusiasts and fans of fast-rising artiste, Rema, have compared him to some alist music stars home and abroad.

One @Mustafaa_m3 on Twitter said, “Rema is a mixture of  XXXTentacion, Traviss Scott and Wizkid.”

However, some die-hard fans think it’s disrespectful to compare Rema to Star Boy who is arguably one f the most successful music artiste in Africa.

The 18-year-old fast has gained more prominence since the release of his debut EP ‘Rema’.

WuzupNaija gathered that Rema was discovered by D’Prince in Benin city who said he saw “star value” in the young singer.

The song earned him the Next Rated award at The Headies 2011. In addition to winning the award, he was awarded a 2012 Hyundai Sonata courtesy of the organizers.

Rema is a mixture of XXXTentacion, Traviss Scott and Wizkid

Rema sounds too much like Wizkid to be considered better than him. Y’all should calm down please.
I like the chorus to Dumebi shaa.

Rema should do a song with Wizkid so that all of you can rest. Obvs Don Jazzy can arrange this.

Yeah, Wizkid has been put in the same sentence with Fela, that’s cus of his achievements and greatness.. Wizkid is popular, Wizkid is famous, wizkid is a Global super star, Wizkid is talented, wizkid has achieved greater things that Fela never achieved in his era. https://t.co/fMVh5CxjlP

What are your qualities of comparing Rema to Wizkid? Wizkid has every quality to be put in the same sentence as Fela, i wasn’t a fan of him, never will I be. But y’all say he was an activist, but what does an activist got to do with music?

WizKid x Flash x Rema
I would like to hear all three artists on a song.
It would be 🔥🔥🔥

Understand the Gist that Rema should have a story line for Dumebi Video but you gota appreciate the fact it had no Naked Girls… Think it’s a plot to catch Fans his age like Hola At Your Boy did in 2011.

REMA IS MORE TALENTED THAN WIZKID
REMA HAS BETTER VOCALS THAN WIZKID.
REMA IS THE FUTURE OF NIGERIAN MUSIC INDUSTRY.

You all can compare Rema to King Wizkid.
Remember, No one can be Compared to Davido.
The Energy on Stage, Swag, Drips, Lifestyles, Interraction with fans on socialmedia,He is so different from our OLD iconic Musicians. He is irreplaceable!
You cannot compare him to anyone.

REMA IS NOT WIZKID
REMA IS NOT WIZKID
THEY DON’T HAVE THE SAME GRACE!
BIKES AND SCOOTERS MAY HAVE WORKED FOR WIZKID
TIMES HAVE CHANGED!
DUMEBI VIDEO WAS SUPPOSED TO BE PREMIUM QUALITY NOT AVERAGE WITH YOUNG KIDS(I got love for fahdsuniverse❤)
IT’S A NO NO
BIG TRASH.

Rema is turning out to be a younger version of Wizkid, in style & sound. I didn’t see it at first.

Hhhhhhhhhhhh..u guys should see the secret behind rema’s dumebi,wizkid influenced the niggar or lemme say d guy is trying to be like wizkid.
Hhhhhhhhhhhh pic.twitter.com/JMAmax579t

Some fans of Mavin Record’s latest signee, Rema say he sings like Afropop star, Wizkid. The 18-year-old fast became a fan favorite since the release of his debut EP ‘Rema’. However, fans have also pinned Wizkid as the major influence on his music. pic.twitter.com/pijO3CeWNa

Please those of y’all saying I’m hiding under “I am a Wiz fan” blah blah, please I’m a die hard Wiz fan, but you guys should learn to say the truth,Wizkid songs of recent are below his standard, and lacks lyrics unlike before, just hope he gets back to doing what I know him for🚶

Yeah wizkid don’t have good lyrics yen yen….how many times have u stream the ASA new song this week full of good lyrics…nah una prefer rema dumebi to surulere of demee vee full of pray….Guy if you like shout from today to tomorrow we go still vibe to the song keep crying

Can Nigerians just look past sentiments and be truthful to themselves for once?
What happened to the Wizkid that sang Ojuelegba and Baba Nla and the rest, those songs were perfect, mad beats and nice lyrical content , I still vibe to them very much, see a song like Lagos vibes🔥

Personally, which of these two jams makes you lose home training?