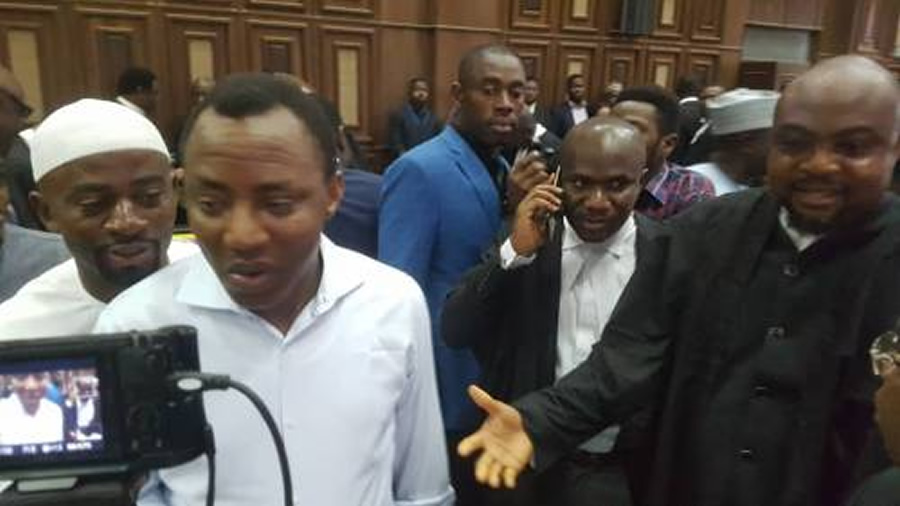 An Abuja Federal High Court on Monday denied Omoleye Sowore bail after he pleaded not guilty to the seven counts against him by the Federal Government.

The Sahara Reporters Publisher has been in custody of the Department of State Services (DSS) after convening a protest tagged #RevolutionNow against the present government administration.

Justice Ojukwu ordered that Sowore should remain in DSS custody until his bail application and further hearing he argued in court on Oct. 4.

Before Sowore took the plea, Fusika had objected to the plea stating that he had not interacted with the defendant since Justice Taiwo Taiwo ordered his release on Sept. 26 as the DSS refused to release the defendant.

“It doesn’t matter the circumstances, orders must be obeyed before taking benefits from the court.

“You can’t obey only when it’s in your favour,” he said.

Fusika said that he was not aware of today’s arraignment but was informed by the pages of newspapers.

“We were in their office on Thursday for long but we’re not informed of today’s arraignment.

“This is an ambush, we are experiencing court orders being disobeyed and they will make people say Nigerian courts are not effective,” he said.

Justice Ojukwu, however, said that the defendant had been charged and was meant to plea either guilty or not guilty

She said that there was no impediment for the plea not to be taken as the plea could be changed in the presence of counsel.

Counsel to the Federal Government, Hassan Liman, SAN, said that he was set to commence hearing and urged the court to fix a date.

Liman requested that the defendant remained in custody.

Recall that Justice Taiwo had on Sept. 26 ordered the release of Sowore after his arrest on Aug. 3 as there was no extant order for Sowore’s continuous detention since the 45 days detention order had elapsed and had not been renewed.