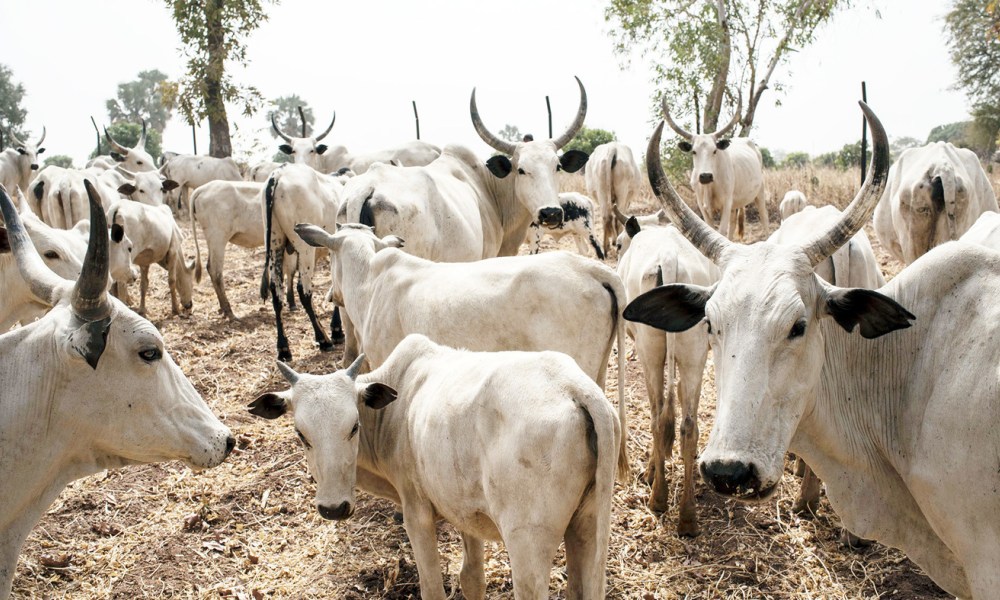 The Zamfara State chapter of the All Progressives Congress (APC) has distributed 200 cows to its members ahead of the Eid-El-Fitr celebration.

The state APC Chairman, Alhaji Lawal Liman, disclosed this at a stakeholders meeting of the party in Gusau on Wednesday.

Liman said that the cows were donated to the party for distribution by a former governor of the state, Alhaji Abdul’aziz Yari.

He said that the gesture was aimed at reducing the hardship of members of the party, especially those at the grassroots, resulting from COVID-19 lockdown.

According to him, the gesture is in line with the party’s commitment to assist various categories of the needy to celebrate Eid-El-Fitr in a happy mood.

“In addition to food items donated to people of the state at the beginning of the holy month of Ramadan.

“We also distributed 200 cows to party members and other needy in the state donated by the state APC leader, Alhaji Abdul’aziz Yari.

“The animals have been distributed under the supervision of central coordinating committee headed by myself.

He said other beneficiaries comprised the executives and elders of the party across the 14 local government areas of the state.

“Youths and women wings of the party and staff of state APC headquarters among others also benefited from the gesture,” he explained.

Liman, who thanked the former governor for the gesture, described it as timely. 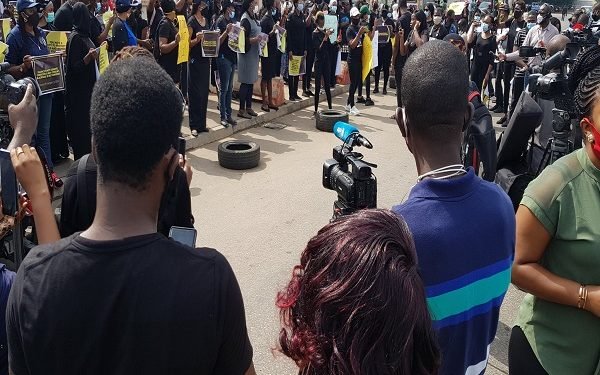 The Nigerian police force headquarters in Abuja and police command in Lagos were greeted by a group of protesters on Friday who staged a protest against the rising spate of rape, sexual violence, assault against women, incest in the country.

They unanimously demanded that there should be a declaration of state-of-emergency on gender-based violence in the country.

The protesters who demanded justice for the rape and killing of Miss Vera Uwaila Omozuwa, Miss Bello Barakat and other victims in the country, called on the police and other security agencies to devise effective strategies to checkmate the rising cases of sexual assault in Nigeria. 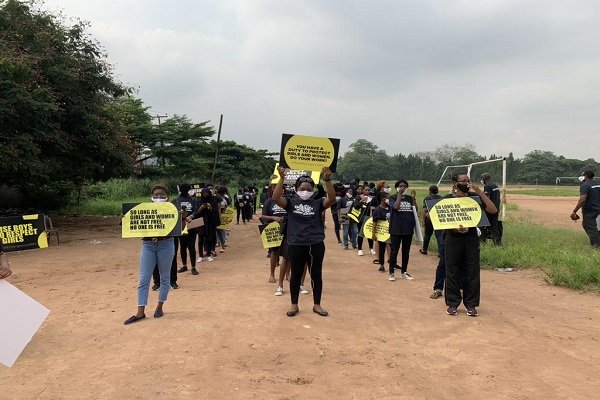 In a statement released by the organisers, it explained that a memo will be forwarded to the Nigerian Governors’ Forum and the Federal Executive Council calling for an effective and sustained institutional response to SGBV in Nigeria. 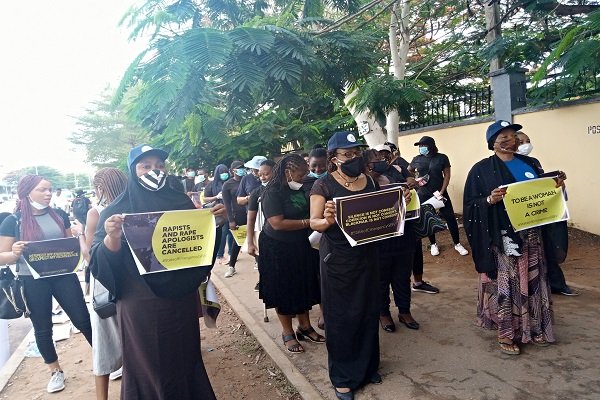 Some of their key demands listed in the statement were:

“Domestication of the Violence Against Persons Prohibition (VAPP) Act and Child Rights Act in all states of the federation; Establishment of Sexual Assault Referral Centers (SARC) in every state, backed with a coordinated, sustainably-funded support system;

“Criminalisation and prompt state-led prosecution of SGBV cases within, regardless of requests or interference by the victim’s family or interested parties; Implementation of functional Family Support Units and Force Gender Units at the state level that are well equipped to address SGBV cases; The imposition of public disciplinary measures against officials of the NPF and state prosecutors that mishandle cases of SGBV. 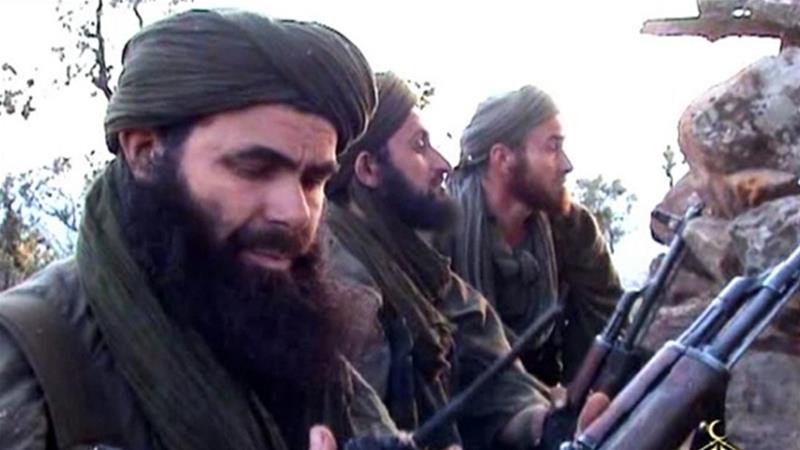 France said on Friday its military forces had killed al Qaeda’s North Africa chief Abdelmalek Droukdel, a key Islamist fighter that its forces had been hunting for more than seven years, during an operation in Mali.

“On June 3, French army forces, with the support of their local partners, killed the Emir of al Qaeda in the Islamic Maghreb, Abdelmalek Droukdel, and several of his closest collaborators, during an operation in northern Mali,” French Armed Forces Minister Florence Parly wrote on Twitter.

The announcement of the death of Droukdel comes almost six months after former colonial power France and regional states combined their military forces under one command structure to focus on fighting Islamic State-linked militants in the border regions of Niger, Mali, and Burkina Faso.

Droukdel was among North Africa’s most experienced militants.

He took part in an Islamist militant takeover of northern Mali before a French military intervention in 2013 drove them back and scattered fighters across the Sahel region.

Droukdel was believed to be hiding in the mountains of northern Algeria. Al Qaeda North Africa was the dominant jihadist force in the region, staging several high-profile deadly attacks until 2013 when it fractured as many militants flocked to the more extremist Islamic State as it seized territory in Iraq, Syria, and Libya.

In Mali, it focussed its activities on the north in Libya and Tunisia. As Islamic State waned, it has sought to lure new talent from among IS veterans.

Parly said that French forces, which number about 5,100 in the region, had also on May 19 captured Mohamed el Mrabat, a fighter she identified as a veteran militant in the region and member of Islamic State in the Greater Sahara.

“Our forces, in cooperation with their local partners… will continue to track these (people) down without respite,” Parly said.

Critics in the region have increasingly scorned Paris for failing to restore stability.

Anti-French sentiment has grown as militants have strengthened their foothold, making large swathes of territory ungovernable and stoking ethnic violence.

Parly said earlier this week that about 100 special forces from other European countries would be deployed to the region to support French and regional troops. 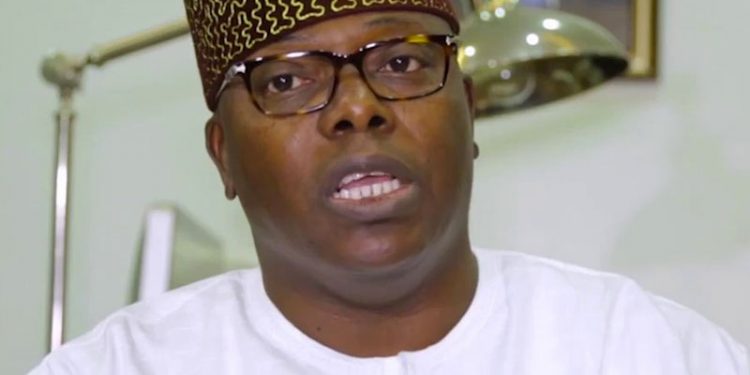 The nomination and appointment of Lagos State’s former Commissioner for Agriculture, Prince Gbolahan Lawal, as the new Oba-Elect of Iruland (the Oniru-Elect of Iruland) has been approved by the Lagos State Executive Council, under the leadership of Governor Babajide Sanwo-Olu, having satisfied all legal requirements,

A statement by the Chief Press Secretary to the Governor, Gboyega Akosile, on Friday, stated that the appointment of Lawal as the Oniru-Elect, which takes immediate effect was made on Friday afternoon, during the State’s Executive Council meeting, where final ratification was made on his nomination.

Lawal, succeeds late Oba Idowu Abiodun, former Oniru of Iruland, who passed on in the year 2019 at the age of 82.

Gbolahan is a Lagos Prince from the Ojora, Aromire, Shokun, and Abisogun branch of Oniru Royal families of Lagos State.

He holds an Executive MSc in CITIES (LSE, Cities) from the London School of Economics and Political Science. He also obtained an MSc in Violence, Conflict, and Development from the School of Oriental and African Studies [SOAS], the University of London in 2008; a BSc Hons. in Botany from the University of Port-Harcourt in 1992 and a product of the famous St. Gregory’s College, Lagos.

He has completed several courses and programmes including the International Housing Finance Program (IHFP) in 2018 and the Advanced Management Programme (AMP) from The Wharton School, University of Pennsylvania, USA in 2015.

Lawal is also a product of the Harvard Kennedy School of Government and the World Bank Institute, Washington D.C. In the last eight years, he has been on the board of the Lagos State Security Trust Fund (LSSTF).

Lawal started his career as a Scientific Officer with the Raw Materials Research and Development Council at the Federal Ministry of Science and Technology in 1994. He later joined The Nigerian Police Force and was commissioned as a Cadet Assistant Superintendent.

While in the force, he held several duty posts amongst which was serving as an Aide-de-camp [ADC] to the former Governor of Lagos State, Asiwaju Bola Ahmed Tinubu. He retired voluntarily from the Nigerian Police in 2008 as a Superintendent of Police.

Lawal was a Senior Special Assistant on Special Projects to former Governor of Lagos State, Babatunde Raji Fashola (SAN). In this capacity, he coordinated the agriculture-based Youth Empowerment Scheme (AgricYES). The success of the innovative Agric-Yes paved way for his appointment as the Honourable Commissioner for Agriculture and Cooperatives in Lagos State in 2011.

He was subsequently appointed as the Commissioner for Housing by immediate past Lagos governor, Akinwunmi Ambode, in October 2015, a position he held until May 2019.

In 2019, Lawal was reappointed as the Commissioner for Agriculture in Lagos by the incumbent Governor Sanwo-Olu.

Lawal has won several awards in recognition of his outstanding performance as a state commissioner.