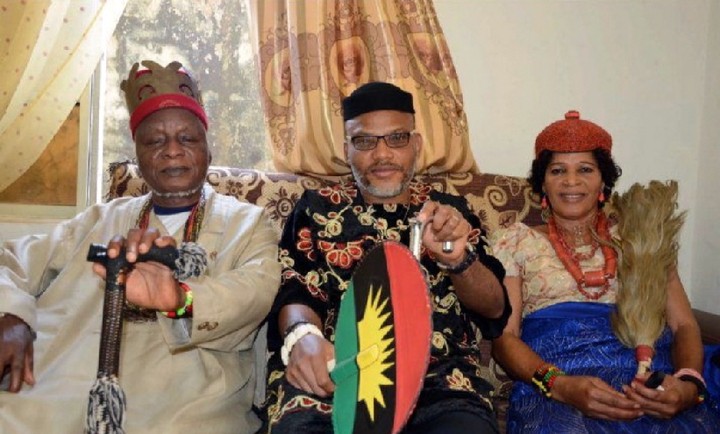 Commercial activities have been paralysed in Umuahia, the Abia state capital as the burial of Eze Israel Kanu and his wife, Sally, the parents of the fugitive leader of the Indigenous People of Biafra (IPOB), Nnamdi Kanu holds today.

According to Vanguard, schools and banks and shops were shut in the city.

A large crowd of people was observed at the Kanu family house preparing for the ceremony, while some suspected IPOB supporters singing were also observed along Factory road leading to the family house.

No security personnel was sighted close to the family house, however, a police van was stationed at the Factory road junction.

The security post has been there since the operation python dance exercise in 2017.

Among the early callers at the church service for the burial was the former Governor of Anambra State, Peter Obi and the Senate Minority Leader, Senator Enyinnaya Abaribe.

In an interview with Vanguard, Leader of the Movement for the Sovereign States of Biafra, MASSOB, Comrade Uchenna Madu, said pro Biafrans groups had come to pay their last respect to Eze Kanu and his wife.

He blamed the Commissioner of Police, Abia State, Ene Okon, for the tension over the burial and assured that the event would be peaceful.

“We are here to pay our last respect to Nnamdi Kanu’s parents, Eze Isreal Kanu and his wife, Ugoeze Sally. It is a traditional burial, not a Biafra activity. You can see that everywhere is peaceful. I blame the Commissioner of Police, Abia State for the tension over the burial. But we assure that there will be no problem.”