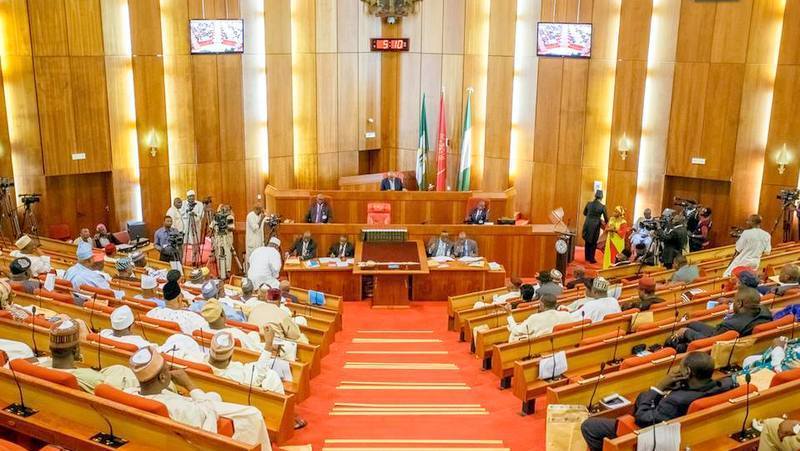 The Senate has introduced a bill which seeks to establish a federal government agency to check hate speech in the country.

It also prescribed death by hanging, as maximum punishment for certain categories of offenders.

The bill, sponsored by a former Senate spokesperson, who is now the Deputy Senate Whip, Sabi Abdullahi, passed first reading on the floor of the red chamber on Tuesday.

It is titled, “National Commission for the Prohibition of Hate Speeches (Estb., etc) Bill 2019.

Abdullahi had sponsored a similar bill in the 8th Senate but could not survive the second reading due to overwhelming opposition and criticisms from the civil society groups and the media.

A copy of the bill obtained by our correspondent on Tuesday shows that offenders of the new bill are either liable to 10 years jail term, payment of N10m fine or death by hanging.

An offender, according to the bill is,

It stated that such individuals have committed an offence if he or she intends to stir up ethnic hatred, or having regard to all the circumstances, ethnic hatred is likely to be stirred up against any person or person from such an ethnic group in Nigeria.

“Any person who commits an offence under this section shall be liable to life imprisonment and where the act causes any loss of life, the person shall be punished with death by hanging,” It added.

Offenders liable to a 10-year jail term or risked N10m fine are those who stirred ethnic hatred by their speeches.

“In this section (3), ethnic hatred means hatred against a group of person’s from any ethical group indigenous today Nigeria.

“A person subjects another to harassment on the basis of ethnicity for the purposes of this section where on ethnic grounds, he justifiably engages in a conduct which has the purpose or effect of violating that other person’s dignity or create an intimidating, hostile, degrading, humiliating, or offensive environment for the person subjected to the harassment.

“Conduct shall be regarded as having the effect specified in subsection (1) (a) or (b) of this section if, having regard to all circumstances, including in particular the perception of that person.

“A person who subjects another to harassment on the basis of ethnicity commits an offence and shall be liable on conviction to imprisonment for a term not less than 10 years, or to a fine of not less than N10m, or to both.

“Any person who knowingly utters words to incite feelings of contempt, hatred, hostility, violence or discrimination against any person, group or community on the basis of ethnicity or race, commits an offence and shall be liable on conviction be liable to imprisonment for a term not less than five years, or to a fine of not less than N10m or to both.

“A person victimizes another if in any circumstance relevant for the purpose of this Act, the person does any act that is injurious to the wellbeing and esteem of another person by treating the person to less favourably than, in those circumstances.”

Any one who hinders the officials of the hate speech commission when established, from doing their works, would also be guilty of the provisions of the proposed legislation.

The bill added that where the offenders are a corporate organisation, every director, trustee and officer of that body corporate shall also be deemed to be guilty of the offence.

“Where the body of persons is a firm, every partner of that firm shall also be deemed to be guilty of that offence.”

The bill noted that the proposed hate speech commission to be known as the Independent National Commission for The Prohibition of Hate Speeches shall be a body corporate with perpetual succession and a common seal.

The Commission shall in its corporate name, shall among others, be capable of suing and being sued; Purchase or otherwise acquiring, holding, charging or disposing of movable and immovable property.

“The headquarters of the Commission shall be in Abuja, but the Commission may establish branch offices in each of the states of the federation,” the bill stated.

It added that the Commission shall consist of an Executive Chairperson appointed by the President of Nigeria on the recommendation of the National Council of State and his/her appointment shall further be subject to the confirmation of at least two-third majority of the
National Assembly.

Other members of the proposed agency would include, a Secretary and 12 commissioners appointed by the President of Nigeria on the recommendation of the National Council of State which appointment shall further be subject to the confirmation of at least two-third majority of the Senate
.
It states,

“A person shall be qualified for appointment as a commissioner if such person(a) Is a citizen of Nigeria, Is a person of high moral character and proven integrity; and has knowledge and experience in matters relating to race, ethnic and human relations, public affairs, and human rights.

“No person shall be qualified for appointment as a commissioner if such person is a member of the National Assembly; a member of any government authority in local, states or federal governments.”

Also exempted are, a member of the executive body of, or is actively involved in the affairs of a political party; one who had promoted sectorial, ethnic, racial or religious animosity or openly advocated for partisan ethnic positions or interests.

The Commission is expected to facilitate and promote a harmonious peaceful co-existence within the people of all ethnic groups indigenous to Nigeria.

It is expected to ensure the elimination of all forms of hate speeches in Nigeria, and to advise the Government of the Federal Republic of Nigeria on all aspects thereof.

The Commission is also expected to promote the elimination of all forms of hate speeches against any person(s) or ethnic group indigenous to Nigeria.

It will also, among others, discourage persons, institutions, political parties and associations from advocating or promoting discrimination or discriminatory practices through the use of hate speeches.

It would promote tolerance, understanding and acceptance of diversity in all aspects of national life and encourage full participation by all ethnic communities in the social, economic, cultural and political life of other communities.

It will also plan, supervise, coordinate and promote educational and training programs to create public awareness, support and advancement of peace and harmony among ethnic communities and racial groups;

It is equally expected to promote respect for religions, cultural, linguistic and other forms of diversity in a plural society;

It will also promote equal access and enjoyment by persons of all ethnic communities and racial groups to public or other services and facilities provided by the Government;

Other roles expected of the agency included arbitration, conciliation, mediation and similar forms of dispute resolution mechanisms in order to secure and enhance ethnic and racial harmony and peace.

It will also investigate complaints of ethnic or racial discrimination and make a recommendation to the Attorney-General, the Human Rights Commission or any other relevant authority on the remedial measures to be taken where such complaints are valid, among others.