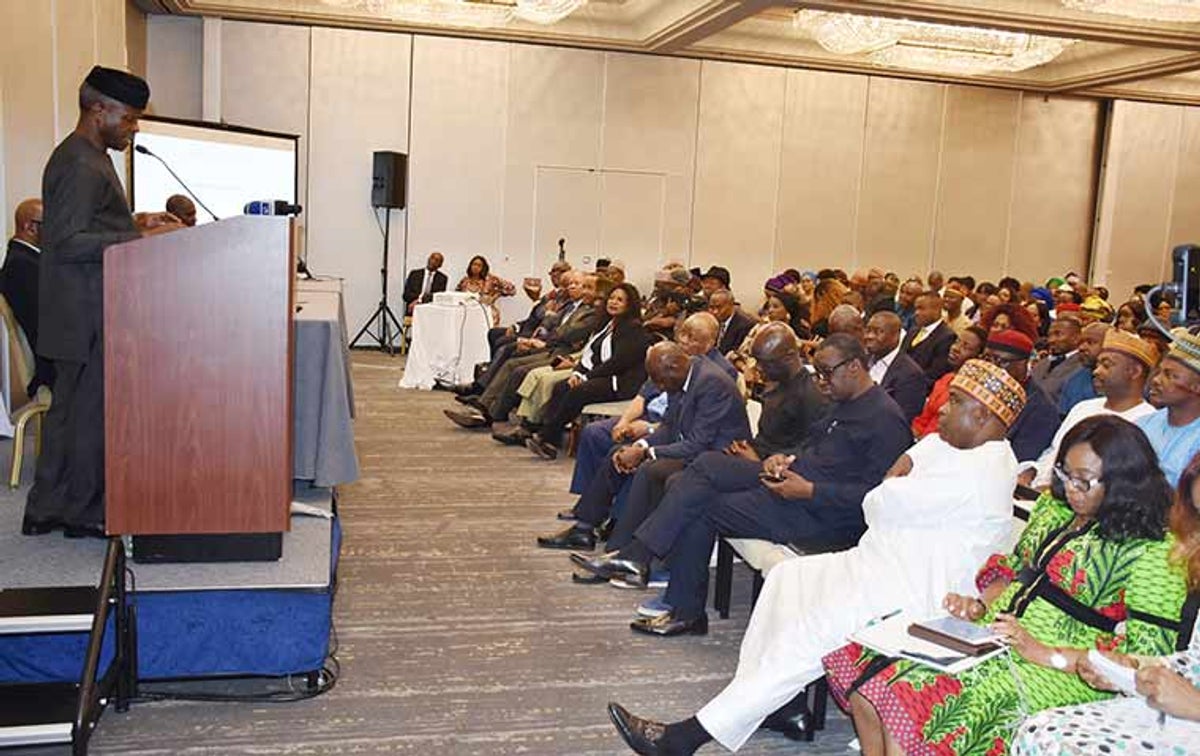 Vice-President, Prof Yemi Osinbajo has told Nigerians in diaspora that the spate of kidnappings in Nigeria is exaggerated and not entirely new.

This is despite recent travel advisories issued by the United States and the United Kingdom asking its citizens not to visit some states in Nigeria due to the rising insecurity which is a result of kidnapping, banditry, militancy, terrorism and other challenges.

Speaking at a town hall meeting in New York on Sunday evening, Osinbajo said the social media “tends to be hysterical about practically everything”, the News Agency of Nigeria reports.

The Vice-President spoke in response to several questions and comments on the security situation back home.

Many members of the audience had taken turns to express concern about the reported spate of killings and kidnapping back home, and wanted to know what the government is doing to address the situation.

“With respect to general kidnapping which we have seen in parts of the country, again, this is not entirely new. In fact, some of the kidnapping stories you read or listen to are simply not true anywhere, some are fuelled by politics.

“There are cases of kidnapping, no question at all about that, but some of the more dramatic stories that you hear are simply not true.

“Every report of kidnapping we receive, we try to verify, and at the end of the day you find out that people just tell all sorts of stories.”

Osinbajo said the Federal Government was working with the states to check kidnapping where it was actually taking place, using technology to track the perpetrators.

He said the efforts were already yielding results with several arrests made by security agencies in affected areas.

Osinbajo said the government was capable of addressing the security challenges, assuring Nigerians that the news “will be a lot better very soon”.

Turning to banditry and farmers/herders clashes in the North-west and central, the Vice President described them as “resource conflicts”.

According to him, banditry, especially in Zamfara and Katsina, was more of a fight over the control of mining sites by armed groups.

He said the government was taking several measures, including shutting down the mines, to address the problem.

“In the North Central, we have the livestock transformation plan to address the farmers/herders conflict.

“Ultimately, it is ranching that will solve the problem because you cannot have people wandering across the country with their cattle.

“It is not helpful to them, this they know, because ranching is more convenient and profitable.

“So, we are building herd dams in the northern states so that people don’t necessarily come down south in search for water and green pastures for their herds.

“We are also trying to ensure we provide grazing areas before we come to cattle routes.”

Osinbajo said in fairness to herders, the livestock sector had not enjoyed the kind of government’s funding and support accorded farmers over the years.