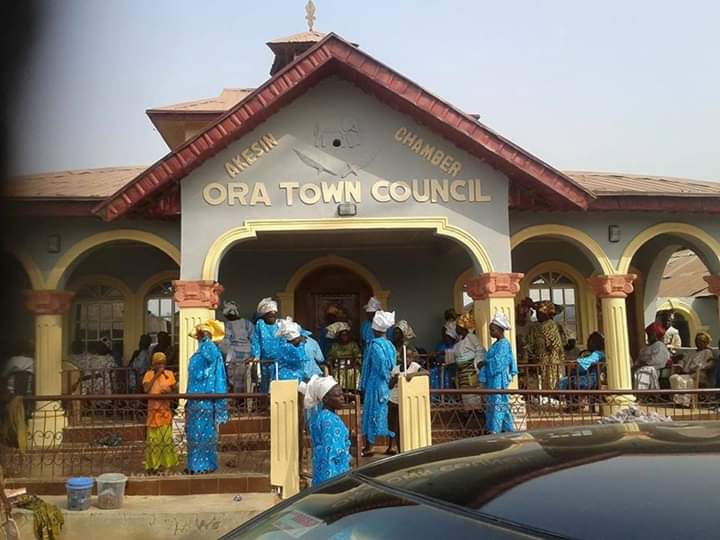 A human rights group, the Centre for Human Rights and Social Justice (CHRSJ) has advised the Akesin Ora-Igbomina in Ifedayo Local Government Area of Osun State, Oba Samuel Oladoye Idowu, to stop parading himself as monarch.

The group said its advice is based on a Supreme Court judgement which nullified the Obaship title of “Akesin-Ora” on September 1, 1995 by recognising “Akesin” as one of the Chiefs of Oba Asaoni of Ora-Igbomina Kingdom.

The rights group in a statement, on Wednesday, by its Executive Chairman, Comrade Adeniyi Sulaiman insisted that all the parties (including Osun State Government and Osun State Council of Traditional Rulers) in the Obaship matter must obey the judgement of the Supreme Court, noting that the rule of law should be followed to the letter and obedience to the Court order should be total.

CHRSJ described the disobedience to the Court order by the parties as gross abuse of rule of law and tantamount to the contempt of the Supreme Court.

It urged Idowu to “stop poking finger into the eyes of the law” by parading himself as Oba in Osun State, Southwest, Nigeria and beyond.

The statement accused the authority concerned of playing politics with the implementation of the Supreme Court ruling since 1995, lamenting the injustice meted out to the people concerned with the Chieftaincy matter.

“It would be recalled that the purported Chieftaincy tittle of “Akesin-Ora” warranted the setting up of Aboderin Commission of Enquiry by the then Government of Oyo( now Osun) State in 1976 and the report of the Enquiry led to series of legal battle between the parties.

“In its report, the Aboderin Commission of Enquiry found and established that the Akesin Ora-Igbomina is not an Oba and therefore,he is not by tradition qualified to wear a beaded crown because he is only one of the Asaoni’s Chiefs.

“The matter went on to the Court of Appeal, Ibadan Division and the matter eventually landed in the Supreme Court of Nigeria in 1989, upon which the final judgement was delivered by the Apex Court in favour of Asaoni Chieftaincy title.

“The Supreme Court in the suit No: SC.256/1989, gave an ordered that the “Akesin-Ora” should not be recognized as “Oba” and not to talk of wearing a beaded crown under Chiefs Law of Osun State.

“And the judgement of the case was subsequently reported in the Nigeria Weekly Law Report as The Governor of Oyo State ( now Osun State)  V. Folayan(1995) 8 NWLR(Pt413)292.

“CHRSJ investigations revealed that the Supreme Court judgement enclosed the findings and recommendations of the Aboderin Commission of Enquiry in a lead Judgement delivered by Justice Abubakar Wali.

“Investigation also revealed that Mr. Idowu  Samuel and his purported Chiefs have been fraudulently collecting salaries from the purse of State Government of Osun, adding that paying such salaries and allowances to somebody who was not known to law was a grievious violation of the Supremacy of our Constititution as contained in Section 235 and 287 of the 1999 Constititution of the Federal Republic of Nigeria(as amended).

“A sum of over Seven Hundreds Million Naira (N700,000,000k) of Osun State taxpayers money have been fraudulentely received by the purported occupier of the “Akesin-Ora” and his illegal Chiefs after the Supreme Court ruling of 1995 which was not only criminal in nature but an affront against the decision of Supreme Court of Nigeria.

“Anti-corruption agencies, Economic and Financial Crimes Commission (EFCC) and Independent Corrupt Practices and Other Related Offences Commission( ICPC) would soon be called upon to investigate such financial Crimes.”

“Every Nigerian aware of what happened recently in Eleruwa’s Chieftaincy matter in Oyo State where the deposed monarch immediately moved out of the Palace he was illegally occupied for more than two decades without even waiting for any Gazette at all.

“CHRSJ urge the State Government under the watch of Alhaji Gboyega Oyetola to implement the Supreme Court judgement as gazetted by the Government of Osun State on 4th of September,2003 in the No.8. Volume 13,as part of outcome of the State Executive Council meeting of 29th day of August,2003, in the interest of peace and justice.

“As a responsible and responsive human rights organization and believer in the rule of law, we would not continue fold our arms and allow the wheel of justice to be scuttled by those who pretends to be custodian of Temple of justice.We will soon do the needful to ensure that Supreme Court judgement on the subject matter is implemented within the shortest period of time,” the group submitted.