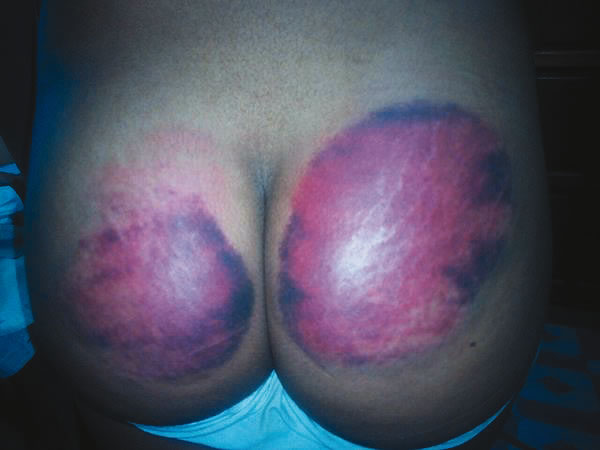 A flogging incident in a school in Ijegun area of Lagos, which left the buttocks of a 13-year-old girl badly bruised, has led to an outrage on social media, calling to question the limit of corporal punishment.

According to a report posted on punchng.com, the girl, Glory (not real name) was caned by three male teachers of St Saviour’s High School, Ijegun as punishment for attending the birthday party of another student of the school in company with other classmates.

But Glory’s father told PUNCH that whatever reason the teachers had to punish his daughter, beating to the extent of needing medical treatment was a criminal act.

Glory said one of the three teachers who caned her was the son of the school owner, who is also the academic officer.

The girl had explained that because there was a public holiday on Friday, May 27, the school held its Children’s Day party on Thursday, the previous day, during which they all wore mufti.

Her father said that she and many other classmates decided to go to the house of another student living beside the school, who happened to be celebrating her birthday.

“That was when her name was written with others as offenders, who attended the birthday without permission,” her father said.

She came home crying on Tuesday when school resumed after the public holidays, only for her father to discover the bruising that whipping had done to the girl’s backside.

“I have to tell you that I nearly fainted when I saw the injury. I am a soft person, but that does not mean I don’t punish my children when they do something wrong. But I will only be crazy to cane my child to the extent of inflicting injury on her.

“How can three teachers do that to my child? For attending a birthday? Is that such a crime. Why three teachers would beat her is still a mystery to me.”

The picture of the girl’s injuries circulated on Twitter on Wednesday as people called on authorities to act against the school’s action, while the alumni association of the school has promised to look into the case.

The family of the girl stormed the school on Wednesday morning demanding answers on why three teachers had to mete out such brutal punishment to the girl.

It was learnt that the girl was also suspended for the remainder of the week.

When our correspondent visited the school, the administrator, Mr. Isaac Idowu, said that the claims by the girl’s family were far from the truth.

According to him, after the school, students were released at 3pm after the Children’s Day party, more than 70 students including Glory decided to go to a hotel called Fatherland in the area and attended a birthday party, where some of them allegedly got drunk.

Would you let your child be caned like this for any reason?