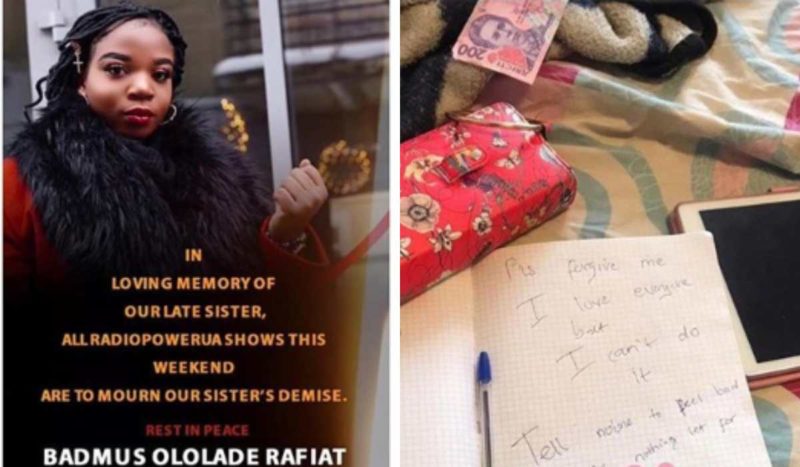 A Nigerian female medical student in Ukraine, Rafiat Ololade Badmus, has reportedly committed suicide after getting expelled from school for failing a mock exam.

The final year student of Ternopil State Medical University [TSMU] in Ukraine, allegedly killed herself after the school refused to provide with basic support to enable her graduate from her medical degree.

According to her friend who shared details of the incident, the mock exam can be taken several times until one is ready to sit for the final exams.

The friend also alleged that the academic staff at TSMU frustrated her efforts to transfer to another school to take the MBBS as other students do. She alleged that TSMU refused to provide the transcript needed for the process.

Badmus Ololade Rafiat was in 2017 elected as the manager of social events of TSMU Nigerian Students’ Association.

“On Wednesday she had a paediatrics exam to take, she did well but they refused to pass her because she didn’t pass her prekrok which is a mock exam in preparation for the final mbbs and is totally unheard of because the prekrok is a mock exam that can be taken as many times as possible till you’re ready to take the main exam which is the final mbbs.

She went to the deans’ office to beg, she knelt down and cried, we all pleaded but they said they wouldn’t help us. So we decided to start the transfer process to a different school which is what everyone does when they’re expelled, so as to take the final exam in a different school.

We requested for her transcripts so we can start the process but they refused to give it to us, they said she should go back to Nigeria and reapply for the visa. Mind you, this is nonsense because you have the right to transfer to another school when you’re expelled from yours. All you need to do is transfer your credit and get your transcript from your school and then transfer but they refused to let her transfer.

Yesterday, we went back there and pleaded and they refused, which caused my friend to believe that all hope was lost. She was being expelled in final year with no hope to continue somewhere else. She left a suicide note and killed herself yesterday.

Now the school is denying ever expelling her. They even put up a post in the middle of the school stating that. They’re saying she killed herself because she was depressed and suicidal. My friend was fine, they killed her. Nothing we do can bring her back but we need a reform!!! Her death can’t be in vain.”