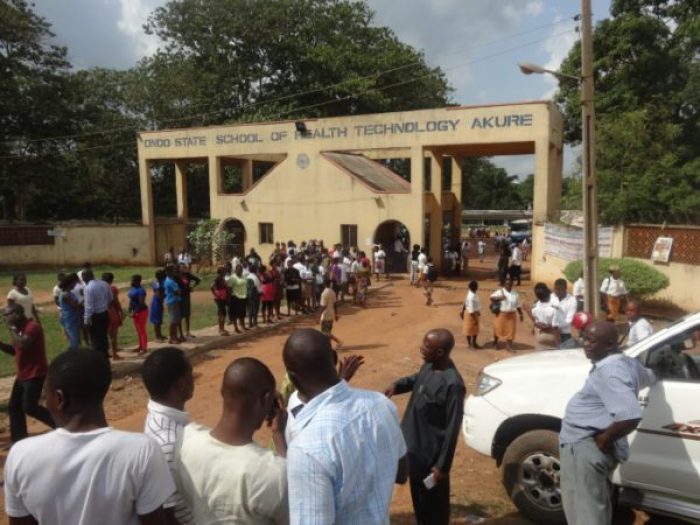 The Ondo State Police Command, on Monday, said it had arrested three students of the School of Health Technology, Akure, for allegedly gang-raping a female student of the institution.

According to the police, the suspects are Damilola Aderoboye, Charles Eyitayo and Blessing Michael.

They were said to have committed the crime last week Wednesday at the residence of the victim’s boyfriend.

It was gathered that the case had been transferred to the Criminal Investigation and Intelligence Department of the command for investigation.

The Police Public Relations Officer in the state, Femi Joseph, who disclosed this to our correspondent, said the command had begun an investigation into the matter.

“We have commenced an investigation into the matter, and after the investigation, the suspect will be charged,” Joseph said.

A source narrated that the victim was gang-raped by the suspects in her boyfriend’s room on the Oda Road, which is not far from the campus of the institution.

“The victim went to visit her boyfriend in the evening of Wednesday, but she did not meet him at home; she met another man, who is a friend to her boyfriend.

“So, she decided to wait for the boyfriend. Suddenly, three young men entered the room wieding dangerous weapons and asked the man they met inside to have sex with the lady, but he refused. It was after this that they gang-raped her.”

Narrating her ordeal in the hands of the suspects, the victim said,

“I was in the room when the three men forced their way in and pounced on me. I was shocked when they entered the room and they asked me to take off my dress and lay on the bed with my back.

“I begged them to leave me alone, but they refused. They asked one of them to forcefully undress me and before I knew what was happening, the three of them had raped me.

“They threatened me that they had the recording of the action and would upload the footage on the social media if I told anyone about it.

“But I could not keep the trauma to myself and I had to tell one of my friends, who reported the issue to the police and the boys were tracked and arrested.

“I knew one of them, Eyitayo, who had once asked me out, but I rejected his advances. I have to speak out now because I cannot keep it to myself and I really want justice. Those boys took advantage of and abused me.”

The Provost of the school, Dr Felix Olawoye, condemned the alleged action of the male students and declared that they must face the full weight of the law.

“The suspected student rapists have been arrested and as an institution, we believe that the law must take its rightful course after which the school’s disciplinary committee will also present its recommendations to the political head, the Commissioner for Health. We don’t tolerate any form of indiscipline,” he stated.