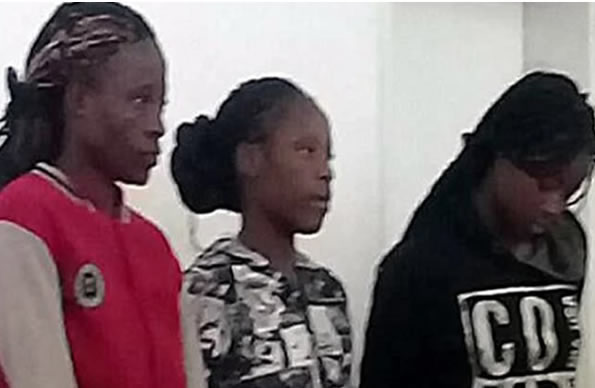 Three women have appeared in court after a pastor said they raped him.

Two of the women are alleged to have pinned the man down on a bed, while the third carried out the sex attack.

A magistrates’ court in Bulawayo, Zimbabwe, was told that the victim was owed money by the attackers and he went to their home to collect it.

They invited him into the house, but once he was inside, he said, he was grabbed around the waist and his trousers were pulled down by a second who then groped him.

One of them said they were ‘just playing around.’

Prosecutor, Mr. Petros Shoko, said: “On July 14 at 7pm, the complainant went to the accused persons’ residence to collect money which Mlauzi owed.

“They forced him to lie on the bed and undressed him. Ncube sat on his chest and he tried to push her away. However, Mlauzi held his legs together and sat on his top, pressing him against the bed.

“Mpofu was in another room and brought condoms and placed them on the complainant’s manhood and helped to hold him down.

“Ncube had sexual intercourse with the complainant once without his consent,” Shoko said.

The three denied raping the pastor but admitted indecent assault.

Ncube said: “We were just playing around, Your Worship. I did not think that he would take it seriously.”

Mpofu denied taking part, but admitted bringing the condoms saying: “We keep them around the house and I just brought them.”

Mlauzi said she wanted to ‘fix’ the pastor who she claimed had a habit of walking in on the women when they were bathing.

She said: “He always walks in on me bathing and claims to be unmoved as a man of God. I just wanted to see if he was going to be aroused or not.

“I did not plan to execute the whole rape thing Your Worship.”

Magistrate Lungile Ncube was told by Mlauzi that she just wanted to prove to the pastor that he had ‘feelings like everybody else.’

She said: “I wanted him to see that he was not special and was not immune to sexual arousal.

“When I touched him, he immediately got aroused; and that is all we wanted to see,” she said.

The complainant was taken to Mpilo Central Hospital for a medical examination and the report will be prepared for the magistrates.

All three were remanded in custody until August 7 for a full trial.

Earlier this month, a 39-year-old teacher was hospitalised in Zimbabwe after claiming a gang of three women kidnapped, drugged and raped him for two days.

The man from Makoni in Chitungwiza was left with severely bruised genitals and doctors at Waza Hospital found other signs of sexual abuse after he was dumped by the roadside.

Police are still trying to find the three women who are allegedly part of a ‘sperm bandit’ gang preying on hitchhikers and travellers and steal and sell their semen for ‘good luck.’

There is no suggestion the two alleged crimes are related.

Continue Reading
You may also like...
Related Topics:Gang rape, rape