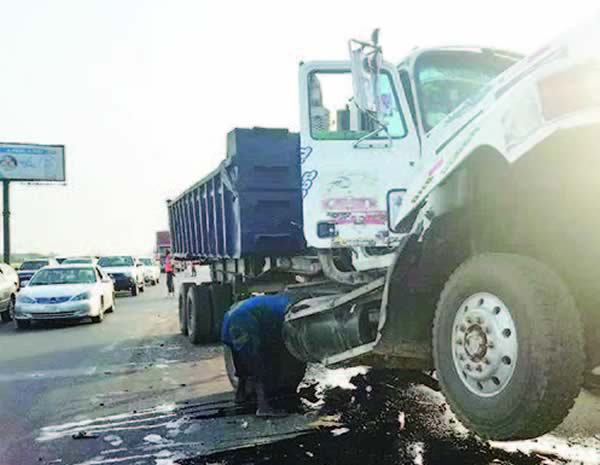 The driver, our correspondent, learnt ran away after the act.

It was gathered that the driver was climbing a hill when its brake failed and rolled backwards and hit a motorcycle that was behind it.

An eyewitness said the victims sustained injuries and were rushed to a hospital where they died some hours later.

The Police Public Relations Officer in the state, Haruna Mohammed, confirmed the incident to our correspondent.

Mohammed said the body of the deceased had been deposited at the hospital morgue.

“There was a fatal motor/motorcycle accident along Ukwukpaka junction, Mbanakwa Okpuno Nnewichi in Nnewi North LGA involving a tipper with Reg No XA 206 KPP and a motorcycle with Reg No QL 500 UWN ridden by one Clement Odo, 50, conveying a pillion, one Anayo Elinye, 38.

“Preliminary investigation revealed that the tipper had a brake failure while on motion, rolled backwards and hit the said motorcycle.

“As a result, both the rider and the pillion sustained injuries and were rushed by police patrol team to Diocesan Hospital where they were confirmed dead by a medical doctor.

“The tipper driver absconded immediately, but efforts are on to apprehend and bring him to justice.”

Continue Reading
You may also like...
Related Topics:Anambra, brake, Tipper