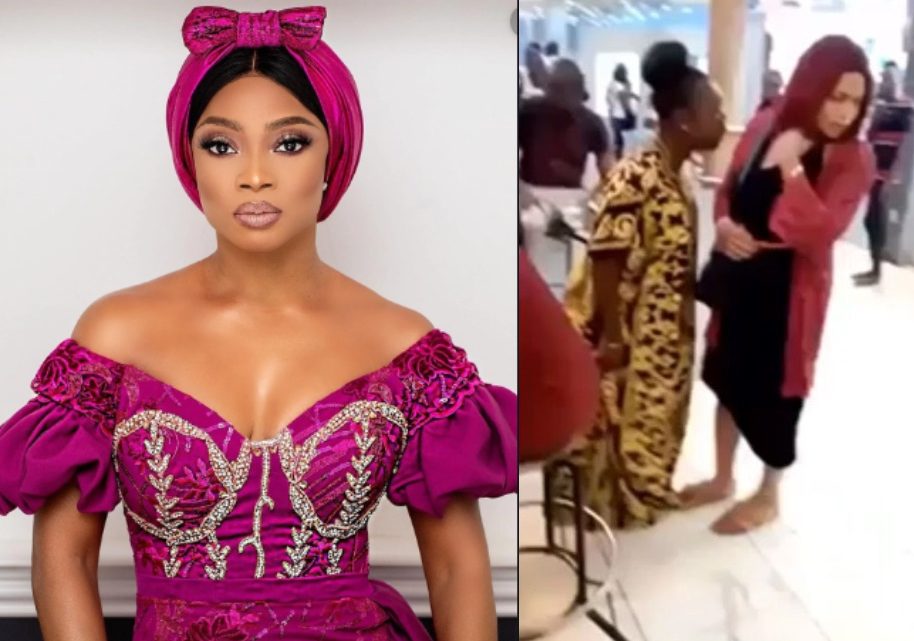 Popular OAP Toke Makinwa must have become extremely thick-skinned with the level social media users constantly troll her whenever she posts her opinion on issues.

Again, Toke is trending at the top spot on Twitter Nigeria over her comments on a viral video on Wednesday.

The celebrity OAP took to Twitter on Wednesday afternoon to react to a video of an angry woman attacking her husband’s suspected girlfriend popularly known as ‘side chick’.

WuzupNigeria reported earlier that the woman was seen in footage presently making the round on social media harassing a lady at Ikeja City Mall in Lagos for allegedly having an affair with her husband.

Reacting to the woman’s action, Toke said the woman is lucky the lady didn’t fight back as she was being harassed.

“I think the whole marriage concept of “owning” your partner is flawed. You do not own anyone, you are not responsible for another’s action, it should not drive you mad,” she said in a series of tweets.

“She’s very lucky the lady kept trying to walk away, if she stacked her back the wife would feel worse. Bad enough you got cheated on, then you get beat too

“I wish she kept the same energy for the Cheater, like no one owns another human being and the least you can do is fight the human that broke the vow he made to you.

“I think the whole marriage concept of “owning” your partner is flawed. You do not own anyone, you are not responsible for another’s action, it should not drive you mad

“Two people make a choice to do life together, one person defaults on promises/vows, it is not a reflection of you, don’t lose your peace over another human being.

“In one single action, she’s made the alleged side chick an angel, the girl walked away while the woman looked hella crazy. Resist the urge to let another’s action make you crazy

“The side chick she attacked might not be his only indiscretion, she’s even made them closer. The man is probably begging her right now. As a woman work on yourself, don’t lose you to nobody.

“Don’t let another’s action be a reflection of who you are.”

When the OAP was challenged by a Twitter user to tell her followers how she reacted when her estranged husband Maje Ayida cheated on her, she said:

“Didn’t go around fighting nobody, I walked away, focused on my dreams and aspirations, worked on me, still working…. I can go on but… you completely missed the point of the tweet but I can’t help you.”

She went on to say:

“Not one size fits all, it hurts but as women attacking ourselves over a man is not the solution. If he cheats, it’s not about you, don’t let his actions be a reflection of who you are.

“As the outrage started getting heated, she added:

“P.s do not miss the critical point of what I said, as women, do not carry the cross of another’s indiscretion, stop trying to share in the shame that is not yours. Work on yourself means focus on YOU. Your mental health, your spiritual, financial and emotional growth.”

Well, Toke must be used to how Twitter users pounce on her tweets and it didn’t take long before they went for her as usual.

Many Twitter users who have been dragging the OAP seem to disagree with the part of her comment where she said:

“I think the whole marriage concept of “owning” your partner is flawed. You do not own anyone, you are not responsible for another’s action, it should not drive you mad.”

Some, however, supported Toke’s position on “owning a partner in marriage”.

Lol, Toke. Once you are married to someone; you both own yourselves and responsible for the other’s action.

It takes someone who really understands ‘marriage’, and willing to make the best out of it, to get this. https://t.co/jDpTA61ATL

Wait, why are y’all attacking Toke again? When you marry someone, do they automatically become your property? You do not own them, you should never let their actions drive you mad..
Valid!!!

Toke Makinwa has blocked me so someone should help me tell her that she should not be addressing certain issues publicly, let her stick to her IG slaying.

Is it not the same toke that her sugar daddy’s kids dragged that time?
Lmaoooo, aunty keep producing bags mbok

When you are in a relationship or marriage, your actions have direct impact on your partner, you are not only accountable to them, you owe it to them to be of your best behavior.

Lol, Toke. Once you are married to someone; you both own yourselves and responsible for the other’s action.

It takes someone who really understands ‘marriage’, and willing to make the best out of it, to get this. https://t.co/jDpTA61ATL

Nigerians yet again proving why we’ll keep writing IELTS. Toke said: be the best woman you can be irrespective of your husband’s misbehaviour. You people just love to misconstrue whatever she says

I think what Toke means by saying that women should work on themselves is; if a fellow woman uses Jaruma on your husband, you should use both Jaruma and Oloni to get back your husband

Sister Toke, I think marriage is a commitment. If your partner’s actions doesn’t affect you, then something is wrong. https://t.co/3g0D1Ei9wH

While i respect your right to own an opinion Aunty Toke, i also respectfully think your opinion is trash and shouldn’t have been tweeted. Have a nice day https://t.co/0vyBD6tCls

I checked Toke’s tweet and I get where she’s coming from.

I even thought she said something bad.

Maybe it’s the way she put it or because it’s from her but she’s trying to say never let another human being fuck with your mind so much that you do what that married woman did.

She’s actually making sense but everyone seems to enjoy jumping on the Toke bashing bandwagon. Have a day off https://t.co/swjDli9q5v

SHe worked on herself how ? SaMe Toke that in 2017 Dr Festus Fadeyi children said she should leave thier billonare father alone abi which Toke again pic.twitter.com/cNb4oV6osg

Toke is Protecting her Side chic role with someone’s Husband.
Cos how Tf someone write a whole book about Marriage/Cheating less than 5years ago, only to be having a totally different opinion now? 🤡🤡🤡🤡😃😃😃😃