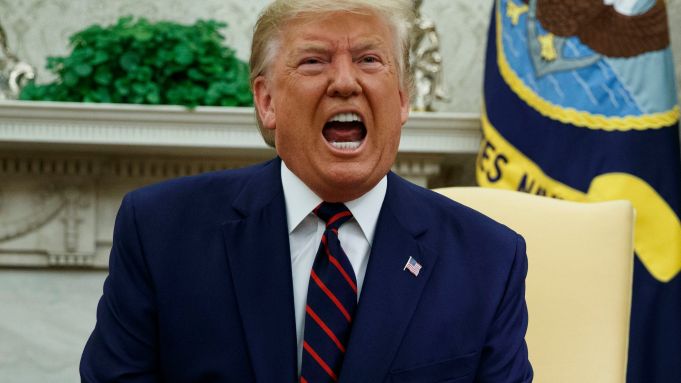 100 lawmakers of the US Senate were sworn in on Thursday as jurors for the impeachment trial of President Donald Trump.

BBC reports that Chief Justice of the Supreme Court, John Roberts administered the oath to the senators.

“Do you solemnly swear that in all things appertaining to the trial of the impeachment of Donald John Trump, President of the United States, now pending, you will do impartial justice according to the Constitution and the laws, so help you God?”

The lawmakers responded with “I do” before each signing in a book that they took the oath.

The senators, will from January 21, begin deliberation on whether Trump should be removed from office over charges brought by the House of Representatives.

Trump was on December 18, 2019, impeached by the House of Representatives, for abuse of power and obstruction of Congress related to his dealings with Ukraine.

But the Republican party has control of the upper chamber and are likely to acquit him.

If this happens, Trump will be joining two former American presidents — Andrew Johnson and Bill Clinton — who were impeached but saved by the Senate. 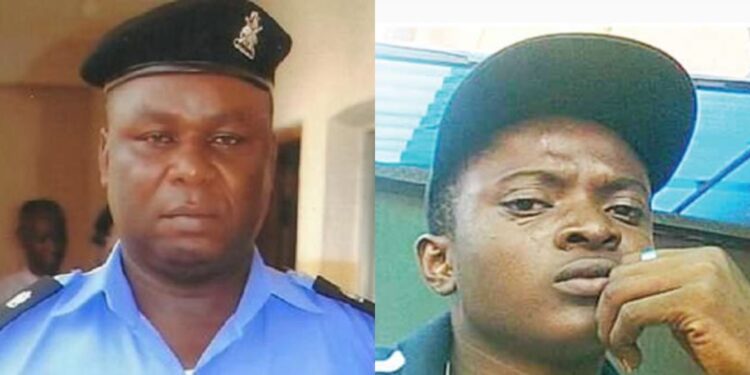 The National Human Rights Commission of Nigeria [NHRC] has summoned a SARS officer, James Nwafor, over the alleged disappearance of 28-year-old Chijioke Iloanya, who was allegedly arrested eight years ago.

Nigerians have testified of the heinous crimes perpetrated by the SARs Boss who claims no one can question him for his constant act of violating human rights.

Chijioke who was 20-year-old at the time was seeking admission to a university when he was carted away during the child dedication of one of his friends on November 29, 2012, in the Ajali area of the state.

His family members, who visited the Ajali Police Station in search of him, were informed that he had been transferred to the SARS headquarters.

Upon getting to the SARS office, Nwafor, who was the Officer-in-Charge of the Anambra State Special Anti-Robbery Squad then, reportedly denied that his men arrested the victim. He was said to have later claimed Chijioke had been shot dead by the police.

Reacting to the matter, the NHRC, through its Twitter handle, stated that the officer had been invited to Abuja for questioning, adding that the commission would ensure that justice was served.

“The attention of @NhrcNigeria was brought to a painful report by a Twitter user, of the alleged torture and murder of her brother by CP James Nwafor who led the Awkuzu SARS division in Anambra State.

“Other Twitter users commented under the post, retelling their experiences or that of their family members. The issue was brought to the attention of @NHRCNigeria and we are working with other authorities to ensure this is not swept under the carpet.

Pastor who reportedly bought Dubai property for Magu, prophesied Buhari will retain him 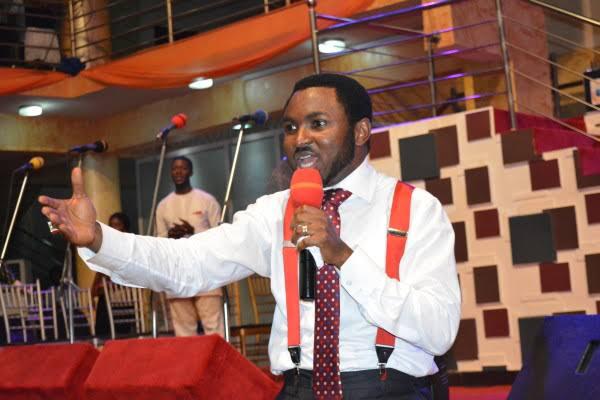 The pastor who reportedly bought Dubai property for Ibrahim Magu, the suspended acting Chairman of Economic and Financial Crimes Commission (EFCC) had reportedly prophesied in the past that Buhari will retain him.

The pastor identified as Emmanuel Omale who is the founder of the Divine Hand of God Prophetic Ministry, Abuja was among religious leaders who prophesied in December 2019 for people to have a clue or spiritual understanding of the incoming year.

The pastor, Omale had reeled out a list of things he said would happen in 2020 and one of the things he highlighted is President Muhammadu Buhari retaining Ibrahim Magu, suspended acting chairman of the Economic and Financial Crimes Commission (EFCC).

According to the pastor on December 31, 2019, “President Buhari has seen the great success of his war on corruption under Ibrahim Magu and he will submit his name for re-appointment and confirmation in spite of massive gang up,”.

Newsmen reported that the suspended acting chairman of the Economic and Financial Crimes Commission (EFCC) allegedly used a cleric to launder funds abroad, the Presidential Committee on Audit of Recovered Assets (PCARA) reveals.

Recall that Magu was arrested on Monday by a combined team of officials of the Department of State Services (DSS) and force criminal investigation department (FCID) after failing to honour two invitations from the panel.

He has been detained since then and the police authorities on Thursday withdrew his security.

In the report of the Presidential Committee on Audit of Recovered Assets (PCARA), which probed assets recovered by the EFCC from May 2015 to May 2020, Omale was said to have been used by Magu to launder funds.

He was reportedly uncovered during an investigation on EFCC’s activities by the Nigeria Financial Intelligence Unit (NFIU).

According to the report, the clergy bought a landed property on behalf of Magu worth N573 million in Dubai, United Arab Emirates.

Below are some of the things Omale said in his end-of-the-year message:

1) The war on corruption will jail two ex-governors who are currently serving as Senators.

3) There are a lot of enemy arrows being shot at the first lady, and her immediate family. She requires special prayers to avert tragedy.

4) The Nigerian security agencies should activate their intelligence gathering mechanism to avert a terrorist driver ramming into early morning commuters in Abuja.

5) A serving Governor from North-West Nigeria will experience tragedy in his family, but seeking the face of God will prove beneficial.

7) So also, a prominent minister from the South East needs to get closer to God, to avoid calamity.

8 ) A retired general from the North East may be implicated in a coup attempt.

9) Two major markets will be engulfed in flames. Traders should insure their shops and goods.

10) The rains will be unusual in their pattern this year, and we will see severe flooding nationwide.

14) The Deputy Senate President should pray against enemy’s attack on his health.

15) I see prosperity for a lot of Nigerians despite a severe dip in the econoy that will affect fixed salary earners.

16) A major old generation bank will face serious challenge and may collapse except for Gods intervention.

17) Christians should be exemplary in their conduct, especially one of the largest churches in south west that may immerse in big scandal.

18) A telecommunication magnet from the South West should pray against stroke and eventual bedridden paralysis.

19) The Chief of Staff to the president, Mallam Abba Kyari is trusted by the president. He should, therefore, pray against a well-orchestrated set up that may result in his removal.

20) President Trump may still get re-elected unless the Democrats field Mr. Bloomberg.

21) A major airline will face a major crisis that will collapse it if they don’t seek the face of God.

22) Governor Obaseki will find it hard to get re-elected in Edo state, unless he seeks the hand of God.

23) The Naira will depreciate against major international currencies, we need God to intervene.

24) A former President of Ghana will win elections in Ghana.

26) An ex-militant in Bayelsa will die in assassination and this may throw the region into turmoil. 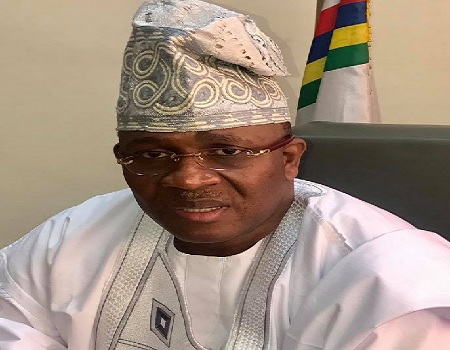 It has been over 24 hours, yet I am still in search of the right words to portray how I feel currently. It did not come like lightning. No. It hit like thunder. Maybe. Maybe worse than that. Or how best can one describe the blow death brought upon us with the sudden demise of Hon? Tunde Braimoh? How best can I understand that one backbone of the Lagos State House of Assembly has been expunged, not even like something taken away temporarily to be returned someday? How best can I pull myself together knowing that we will not see this scholarly politician whose meritorious service has added to the gains of Lagos?

As I sit quietly, ruminating about our journey on this earth, how we became close pals, the circumstances that brought us together, Briamoh’s unique voice, his brilliant arguments and postulations, his sequence and enviable use of words that sometimes got us bursting with laughter and respect, his gait, his carriage, then the reality that none of these would be heard or seen again, I melt with thick sweats on my forehead. Can our tears cease? Two times I have tried to put something together within the last 24 hours. Yet, same two times I have been at a loss for what to say.

Tunde Braimoh was not just a lawmaker, he was an ally, he never had ‘no’ for an answer. He knew what to do even before such was brought to his attention. He had a ready answer for all questions. I remember the many times he would walk up to me to tell me about issues. A constant characteristic was that he solved most of them before I got to know.

Yes, he was not perfect; he was a human being like all of us, but who can judge him when his good deeds, which are unquantifiable, are there before everyone? There is no doubting the fact that he touched lives personally and on behalf of the House of Assembly. He had feelings for the downtrodden – they benefitted immensely. In everything he did, he always placed himself in the shoes of the other person.

Hon. Braimoh had plans, great ones, for Lagos State. He had shared some with me. He also always had his constituents in mind constantly thinking of how best to reach them and give them reasons to be happy.

This year 2020 has shown its troubling uniqueness. Between June and July, we lost two strong pillars. We were still grappling with the reality of the demise of Senator Sikiru Oshinowo, whose valedictory session Braimoh played a role in as the Chairman of the House Committee on Information, Security and Strategy.

We will be consoled by the fact that the late two-term lawmaker served his State and the Federation of Nigeria with his might and intelligence and contributed immensely to their advancements. But, again, our hearts will continue to grieve. Rest on, dear brother and friend.