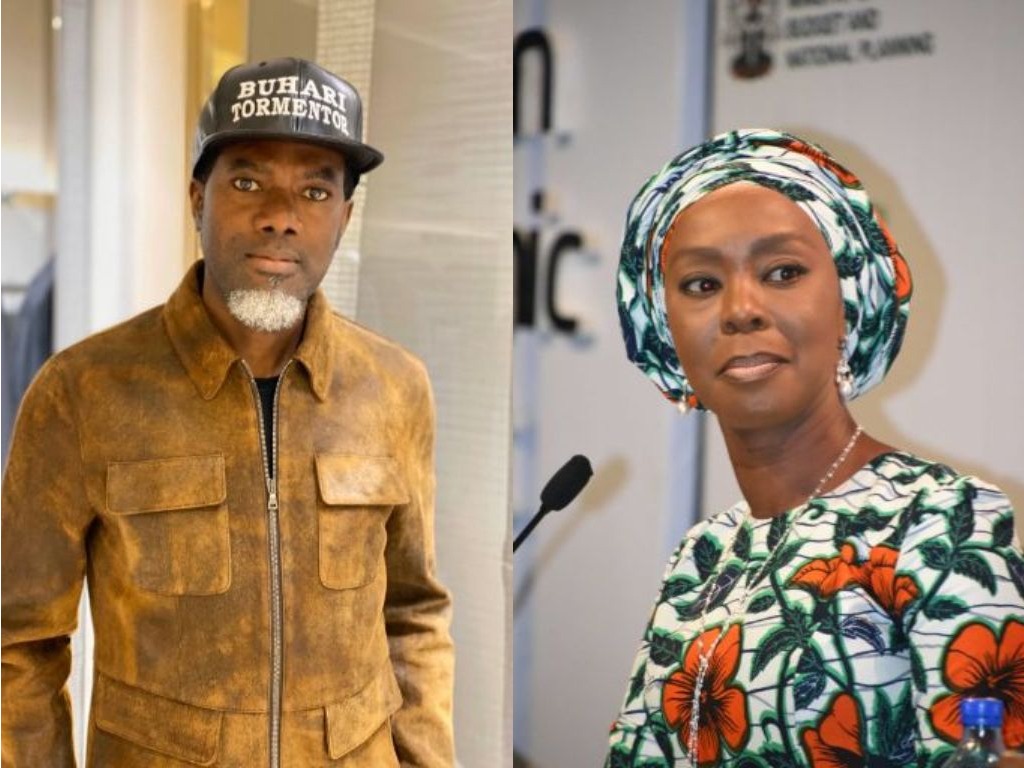 A former Presidential aide Reno Omokri got more than he bargained for on Saturday morning following his tweet comparing the lifestyle of Queen Elizabeth and Toyin Saraki, wife of immediate past Senate President.

Omokri in his usual critical manner had posted a photo of the Queen and Saraki comparing the public lifestyle of the duo and insinuating that the latter was living a life that does not demonstrate greatness.

In the tweet which he has since deleted, the Queen was seen holding an umbrella to shield herself from the sun as she also held her handbag. Saraki, on the other hand, was seen wearing a PDP-branded Ankara dress and was also walking at the tarmac as she alighted from the airplane at the airport. Her male aide was holding the umbrella to shield her from the sun while her female security detail was seen carrying her bag.

“Very few photos speak of the sad state of Nigeria as this picture. This is the Queen Elizabeth, she was born great. She demonstrates her greatness by what she is willing to do for herself at 93 while a lowly official 1/3 her age is unwilling to do it.”

Toyin Saraki took to Twitter on Saturday morning to slam Reno for his ‘mis-juxtaposition’.

She also shared other photos from the event where Reno cropped out the photo he used to compare her to the Queen.

In the photos, Toyin was seen walking down to meet women wearing similar PDP-branded attires waiting to receive her at the airport.

“Mr Bemigho Reno Omokri. While I’ve never personally made your acquaintance, I am surprised to wake up this fine morning, to this mis-juxtaposition from you, as an apparent pastor of the @renoomokri Mind of Christ Christian Center of California and Abuja..

“Indeed Mr Omokri, your misadventure speaks more to the state of your mind and mischief, that you would juxtapose my picture approaching an airport receiving line with that of Her Majesty Queen Elizabeth II on a walkabout at the races…

“A few #facts – I have never desired, sought nor solicited any public office, whether high or lowly. While I am indeed 55, over half the age of Her Majesty Queen Elizabeth II, it is improbable, in the Nigeria of today, that any woman may ascend to the throne of my royal ancestors

“Since the time of your erstwhile appointed and remunerated perambulation as spokesman to Former President @GEJonathan, surely you must have observed, in person or virtually, the practicalities of principals requiring at least one hand free to engage with welcoming delegations.

“While you may not personally subscribe to the historic spirit of chivalry which Sir Walter Raleigh extended to Queen Elizabeth I, hopefully, chivalry is not completely dead in our gender challenged yet beloved nation

“In the meantime, in the spirit and vision of today’s #InternationalDayOfTolerance I’ll leave your mischief with some humour and good cheer!”

Shortly after he had been taken him to the cleaners, Reno quickly apologised to the wife of the former Senate President, claiming he did not know she was the personality in the photo.

Dear Mrs @ToyinSaraki, I did not know that was you in the picture. Indeed, I know your character is not like that. If I had known it was you, I would have investigated further. You are an epitome of a well brought up lady and I crave your forgiveness.

Well, many social media wouldn’t let it slide even after his apology.

Some former aides of Bukola Saraki, APC supporters and other social media users who seem to have been lurking to pounce on Reno over his many social media rants have taken to Twitter to criticise him.

It is unfortunate that Reno continues to drag his own name and the pulpit he claims to represent in disrepute all for retweets.

You see, our ancestors knew a thing or two when they said that only an inbred person will throw a stone into a crowded market. You never can tell where the said stone would land. What if the stone hits his father’s concubine? Reno has learnt this time honored lesson today.

I heard Reno Omokri misfired on Twitter today? Like, am I suppose to be surprised? He probably wanted to insult Gbemisola Saraki who is in Buhari’s government but mistook her for Toyin, Bukola’s wife. You’re prone to a mistake like this if you’re always in a hurry to insult PMB!

It is so unfortunate. Is he that bored? People of purpose don’t engage in misadventures of this magnitude. I learned mental health is a huge concern in the States, though his insurance may not cover the care as it may not be deemed a medical necessity. He needs an intervention.🚨 https://t.co/0QCnYJEJxs pic.twitter.com/zWVynUKjKq

Why do people respond to the likes of @renoomokri? @ToyinSaraki is too accomplished & astute to engage in any level of discourse with Reno.

Reno goes to bed every night wishing something would go wrong in🇳🇬 so he can shake his imaginary table. He is tormented, he needs help. https://t.co/rAypyyAnvh

Mrs. Saraki carried a trailer to Reno’s mentions and trampled him flat with it.

Good for him. He should learn to keep quiet at times and let sleeping dogs lie. Not every time cho cho cho

If Reno meets Toyin Saraki in an airport and she’s carrying a bag and an umbrella, he will offer to help her carry one of them.This is Nigeria where such respect/honor for people in high position is common.

Yet he wanted to do some silly #RenoNugget with the issue.Big own goal🤣

Just few days ago, I wrote here that reno isn’t the tableshaker, tormentor, activist, pastor and motivational speaker he called himself,but a public nusinace suffering from mental imbalance.
Thank God he has acknowledged and signed what I wrote. pic.twitter.com/YnRjAk2V7a

This is what you get when you score stupid political point with everything. Reno is a senseless godforsaken idiot. He would have blocked the person and continue in his deliberate senselessness if it wasn’t Saraki’s wife. He is a horrible and despicable human. https://t.co/WRcSUpKBzc