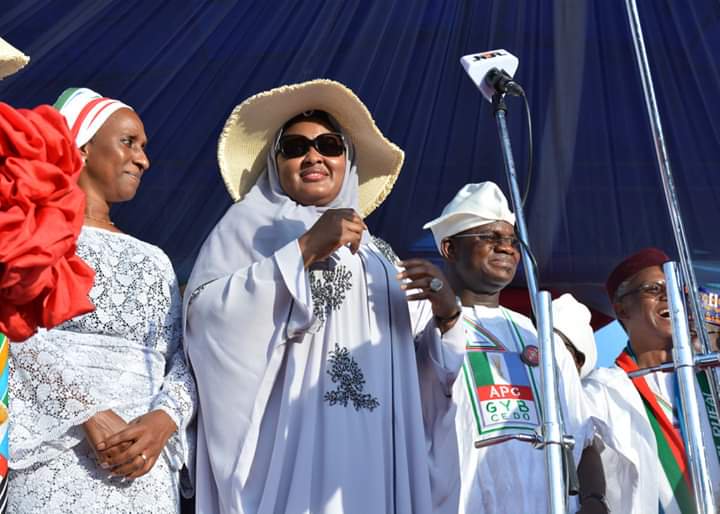 Nigeria’s First Lady, Aisha Buhari, has come under criticism from Nigerians on social media over her plea to the people of Kogi State to forgive and forget any wrong Governor Yahaya Bello may have committed during his first term in office.

Like Kaduna Governor Nasir El-Rufai, the wife of the president made the plea at a rally of the All Progressives Congress (APC) in Lokoja ahead of the Saturday, November 16, governorship election in the state.

Aisha told the residents of the state that the verification exercise organised for civil servants in the state was the reason why Bello could not pay salaries for some time.

She said Kogi residents will not be disappointed if they vote for the incumbent governor following the president’s intervention regarding the payment of salaries in the state.

“My husband used to emphasise on salaries, it took a while for the Kogi salary payment to get settled after a long time of verification,” she said.

“But this time vote for him for continuity of payment of salary on time.”

Aisha’s comment at the campaign rally enraged some Nigerians who have taken to Twitter to lambaste her for “associating with failure”.

Aisha Buhari insulted her husband for bad leadership, but when election came she begged Nigerians to vote for him.

The same Aisha Buhari begged the people of Kogi to vote for Yahaya Bello who failed to pay 30 months salary.

Hope she will beg him to pay salaries after election

Aisha buhari is begging kogi people to forgive yahaya bello after the mess he did in the state.

Surprising how some people think this woman is different from the lots. It’s obvious she has been acting a script and her utterances proves it

It’s left for kogi to decide her future

Aisha Buhari and her children living in affluence and flying about in 1st class flights but begging Kogi state Civil Servants to wallow in abject poverty and die of hunger for Yahaya Bello to stay put in power, he has done nothing with but enriches himself More! Tufiakwa bad shit

But Aisha Buhari is convinced that this government is shit, how tf she goes around campaigning for Yahya Bello? 🤷🏾‍♂️

Aisha Buhari has joined them in pleading on behalf of the donkey called Bello but what’s more laughable is that some pple still hold this woman in high esteem.

I believe it was Einstein who said he was more certain of human stupidity being infinite than he was of the universe.

I will bet you there are morons who consider these callous empty begging as ” humility “, and a reason to forgive Yahaya Bello

When people were committing suicide, and family ties were being broken because of hardships and the thuggery-driven governance, Elrufai and Aisha Buhari didn’t issue any statement nor beg Yahaya Bello, now, they are begging d electorates. So shameful of you all. pic.twitter.com/N5j9wtHOVL

What Elrufai,Aisha Buhari & Oshiomole are telling Kogi People is Simple
Yaya Bello has failed u
Owed Salaries
Offended most of u
Made costly mistakes
But pls forgive him
APC still needs to be In Power in Kogi It’s all about Power not the People. Kogite be wise they don’t Care pic.twitter.com/8hVdvjpux6

I am confused by Aisha Buhari.

Can someone balance me real quick?

So Aisha Buhari called out GYB in front of the crowd like a secondary kid who has err. He cowardly came out to say we have been paying salaries ask them. Ask who? Same people/crowd that muttered salaries salaries! Shame. https://t.co/XWdcA30eUf

This aisha Buhari is beginning to look ugly in my eyes .
The fact that she asks people to support a person like yahaya Bello for second term has made me irritated like her husband’s terrible govt isn’t enough damage.
The woman stinks in my eyes rn tbh .🥵
Kogites do the needful!