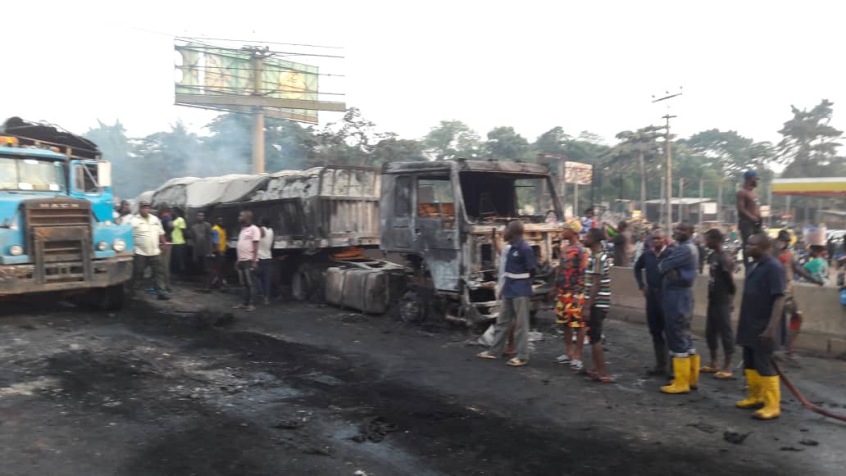 Two persons have been confirmed dead and six others injured in a fire accident involving a petroleum tanker along the Lagos-Abeokuta Expressway on Thursday night.

The Assistant Corps Commander of the Federal Road Safety Corps (FRSC) in Ota, Ganiyu Akeem, told the News Agency of Nigeria that 17 vehicles were also burnt in the accident that happened at Bible College Bus-stop around 11.55 p.m. on Thursday

He said the incident happened when the lone tanker fell and spilled its inflammable content into the drainage.

He said the tanker ignited the fire that burnt many vehicles.

NAN correspondents who visited the accident scene in the early hours of Friday report that Sango Toll Gate premises of the FRSC was also affected.

Also, an official of the Ogun State Traffic Compliance and Enforcement Corps, Adekunle Ajibade, told NAN that the fuel-laden truck was heading to Lagos from Sango-Ota when it developed a gear fault and overturned in the process.

“The driver was trying to change the gear of the vehicle and lost control.

The FRSC commander said that seven fire-fighting trucks, three from Ogun and four from Lagos, were promptly mobilised to the scene.

Thank God, we were able to stop the vehicles coming from Lagos at the Toll-gate on Lagos-Abeokuta Expressway in good time.

“We rescued one person and took him to Ota General Hospital.

“We also evacuated two corpses that were burnt beyond recognition and we took them in our ambulance to Ifo General Mortuary,” he said.

The spokesperson for the state fire service, Muinat Adeleke-Ashimi, who spoke for the acting Director, Margaret Adeseye, confirmed to PUNCH that two bodies were found around 4.00 a.m.

“The petrol tanker skidded off the road, which resulted in the fire. Our men arrived at the scene at 12.14 a.m.

“The fire was extinguished around 4.00 a.m. when two casualties were found — a male and a female.

“We are presently damping the fire.”