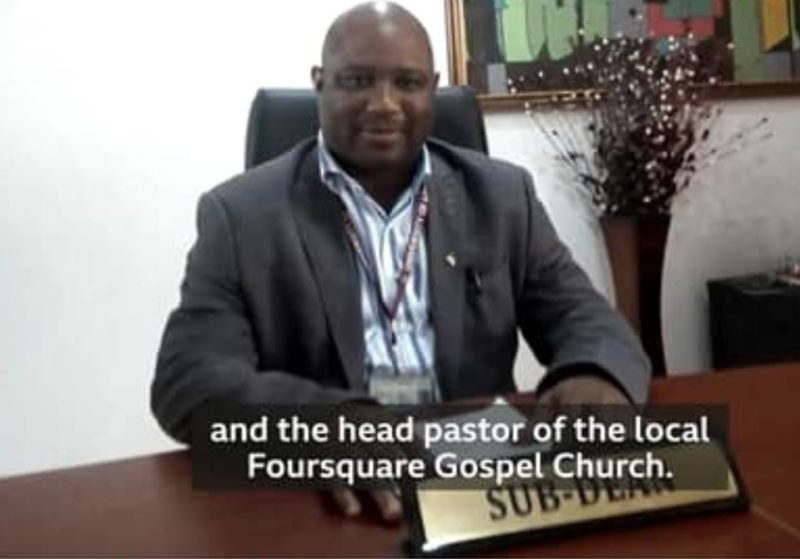 A senior lecturer at the University of Lagos [Unilag], Akoka, Dr Boniface Igbeneghu, has been caught on tape making amorous advances at a ‘student’ seeking admission into the school.

Igbeneghu, who teaches in the Faculty of Art, was caught after a reporter with the British Broadcasting Corporationposed as a prospective student of UNILAG.

The reporter had sought the help of the lecturer to gain admission.

Igbeneghu, a former sub-dean in the faculty and pastor with the Foursquare Gospel Church, had invited her for tutorials several times.

When she eventually honoured the invitation, he asked her age and she said 17.

While saying she appeared older than 17, he complimented her look, saying she was beautiful.

“Do you know that I am a pastor and I’m in my fifties? What will shock you is that even at my age now, if I want a girl of your age – a 17-year-old, all I need is to sweet tongue her and put some money in her hand and I’ll get her,” he told her on camera.

Igbeneghu later prayed with the ‘student’ as he feigned to be leading her to Christ.

In the 13-minute clip, he told her about a cold room in the UNILAG Staff Club where he said lecturers usually slept with female students to give them undeserved marks.

The ‘student’ had protested the practice, saying it was wrong, as the lecturer said the students paid for the marks with their body.

In the final shot, the lecturer told the ‘student’ that she must be obedient if she wanted admission into the school.

“Do you want me to kiss you? Switch off the light, lock the door and I will kiss you for a minute. That’s what they do in cold room,” he said.

He had drawn closer to the ‘student’ and was about to abuse her when she asked for permission to use the toilet.

When she came out, the lecturer smiled and said he had only shown her what happens in the cold room, ridiculing her for behaving like a baby.

The BBC stated in its report that the lecturer did not respond when confronted with the allegation of sexual harassment.

The UNILAG spokesperson, Taiwo Oloyede, however, told the news corporation that it had zero tolerance for such behaviour.

Oloyede had yet to respond to enquiries from The PUNCH on what steps the institution would take on the allegation.

A former lecturer at the Obafemi Awolowo University, Prof. Richard Akindele, had lost his job and was prosecuted after demanding sex from a postgraduate student of the school.