Twitter Nigeria was sent into a frenzy on Saturday with some scary revelations made by ladies who claimed they have used ‘charm’ to subdue their partners.

Controversial relationship blogger, Dami Olonisakin popularly known as Oloni, in her usual way had asked ladies on Twitter to share with her a time they used charm to woo a man.

The first reaction on the thread of tweets sparked an uproar on Twitter as men became terrified by the revelation of the anonymous lady who claimed she used menstrual blood to prepared food for her cheating boyfriend. 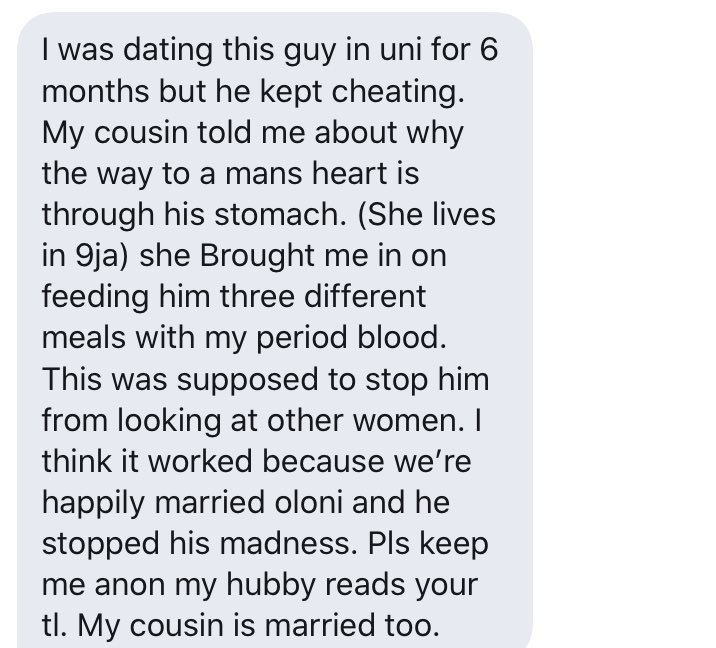 The revelation and others sent chill down the spine of many men on Twitter as they called on other men to be weary of their relationship with ladies.

Kings, call in your babes and wives, lock the door, give them a copy of the Bible and ask them to swear that this love you have been showering on her is REAL and not CONTRIVED ala OLONI! I know what I am talknbout.

Honestly, a woman jazzing your food to become sexually attractive to you is not a pain point for me. If you are a man and you want to avoid this mess,

“If you want to map out a section of women on Twitter that have psychopathic tendencies, just keep tab on Oloni’s thread. Today it is a thread of times they used charm to keep men against their will. Btw, men are still trash.Don’t forget that.Circus of strong independent clowns

“I am trying to imagine a thread where men talk about the bad things they did to get back at Ex’s who broke their heart. Or maybe a thread of times they used charm or other means to keep women against their will. This Twitter will be burning with fire and brimstone for weeks.

“Like I said sometimes back, if your girlfriend/wife is a huge fan of Oloni, just know you are dating a narcissistic lunatic. And can one of them please be arrested for some of these crimes they confess too? One guy should please make us proud. Lock some lunatic up pls”

This juju didn’t start today, some of your mothers who are 2nd wives jazzed your father to get into the family because he is extremely rich. For some it was even your grandmothers that helped your mothers do the charm for your Father. Let’s just break this table.

Oloni will have people confessing to murder soon. We’ll be here when that happens.

“He shouldn’t have cheated” would suffice as a defence and if you think otherwise, you’re a toxic masculist bigot who hates women.

Go ahead queens, tell us how you killed that idiot who cheated.

Just in case you have access to charms and you’ve seen Oloni’s Thread as an inspiration, here are some suggestions;
– Use to be a billionaire
– Be the first woman to INVENT a product
– Use it set up multimillionaire businesses
– ETCs

Too many criminals in Oloni’s threads. All men just wanna do is fornicate, but women are adding extra like revenge, charms, murder, feelings, etc wtf 😭😭😭

Chai. Oloni made a thread for babes to come share experiences on when they used charms on their boyfriends. Jaruma is out there running an Online Mamalawo store. And these people actually have fans? It is well .

I read Oloni’s thread of women using juju on men.. fascinating stuff. So those idiots like men enough to go diabolic to keep them yet still be fake mad at men online? 🤔🤦🏽‍♂️

That Oloni’s thread ehn 🤦🏽‍♀
It’s enough reason for you guys to stay loyal to one good woman but you won’t. Pray you find a genuine good woman, do all you can to keep her, stop fuckin around cos some girls ain’t playing, be prayerful, loyal and stay safe out there kings 🤗

Responses to Oloni’s tweet are everywhere with ladies admitting the use of diabolical means to get men. The truth is, we are not surprised. A lady who doesn’t honour GOD would easily indulge in diabolical ways, and these days, you can tell from their tweets.