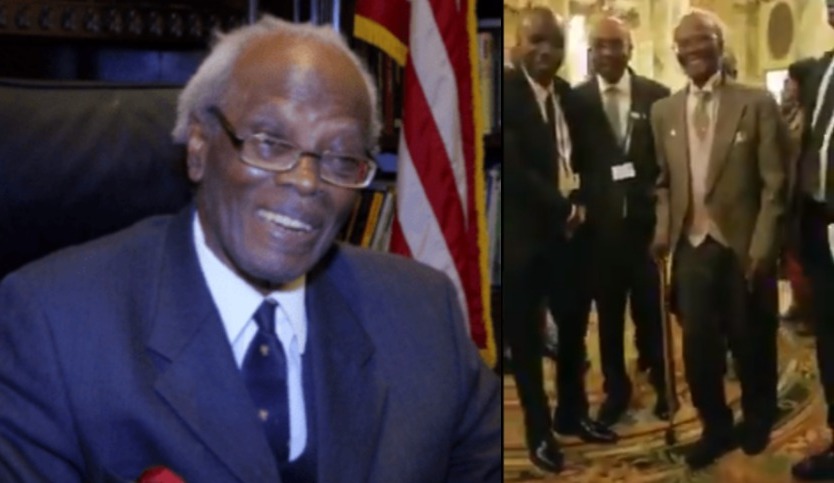 The video of Nigerian 84-year-old Ambassador to the United States, Justice Sylvanus Nsofor (rtd) struggling and fidgeting during a walk at a public function has caused a stir among Nigerians on social media.

Justice Nsofor, a retired justice of the Court of Appeal, was nominated by President Muhammadu Buhari as a non-career ambassador in 2017 at the age of 82.

The video of the ambassador was posted on social media by a Nigerian Twitter user via his handle‏ @RealOlaudah.

In the footage, the Ambassador was seen being assisted as he held a walking stick and was struggling to walk at a public event.

It would be recalled that Nsofor was initially rejected by the Senate when he was nominated as an ambassador-designate in 2017. He was re-nominated by President Muhammadu Buhari before his eventual confirmation by the Senate.

A DSS report also disqualified Nsofor on the grounds that he would not be able to perform the duty of an officer due to his advanced age.

Nsofor is a former Justice of the Court of Appeal (JCA) and the only member of the three-man panel of the Appeal Court who did not endorse the final judgement upholding former President Olusegun Obasanjo’s victory when it was challenged by Buhari, the presidential candidate of the ANPP in the 2003 presidential election.

The octogenarian again court controversy during his first appearance before the Senate when he defiantly told the Senators there was no way he would recite the national anthem, as he had been instructed by Senator Gbenga Ashafa.

He reportedly told the Senate

“Why should I do so? You should have sent me a syllabus.”

When Chairman of the Senate Committee on Foreign Affairs, Monsurat Sunmonu, presented her report on Nsofor’s screening, she said:

“His responses to the issues raised were either not answered or devoid of details and mostly satirical.”

A member of the committee also asked him if he knew about IT. “What is IT?” he asked. “It’s for your age, not mine.”

When asked if he was not too old for the job, Nsofor told the senators to “go and ask Mugabe who is still working”.

He was rejected by the Senate, but on his re-nomination by the President, Nsofor was confirmed despite DSS report indicting him.

The new video which just emerged on social media showing the Ambassador struggle to walk has evoked reactions from Nigerians on Twitter.

In their reactions, many Nigerians opined that Nsofor is too old and lacks the energy required of an Ambassador.

See some of the reactions

Not trying to undermine what this man has achieved or his intelligence, this is not the energy an Ambassador to USA needs. There comes a time when a man must rest and say no to stress.

Some people would say he’s intelligent and the thing annoys me! He’s supposed to be an elder statesman with his intelligence not in active service!!!! He’s 82!!!

Too much breeze baba is on his ass,what happened to young minds?People who has the strength to move around and hear people’s cries,Nigerians are going through so much with the U.S. embassy no one is doing anything about it,this country remains in the hands of bovi and likes

this is beyond appalling even considering the number of diplomats we have in the country, we are being represented in one of the most important countries by an old man that can barely walk. Kosi wahala.😰😰

At this point I think I really need to ask what exactly is wrong with our country. If this is true then I’m so done…When we have great young minds out there @Omojuwa @DebolaLagos @adamugarba etc.

Continue Reading
You may also like...
Related Topics:Featured, Nigeria Ambassador to US, Sylvanus Nsofor

God has honoured the words of His servant, Fani-Kayode says as Prophet T.B. Joshua’s prophecies are fulfilled
`Aso-ebi’: Gate pass to social gatherings