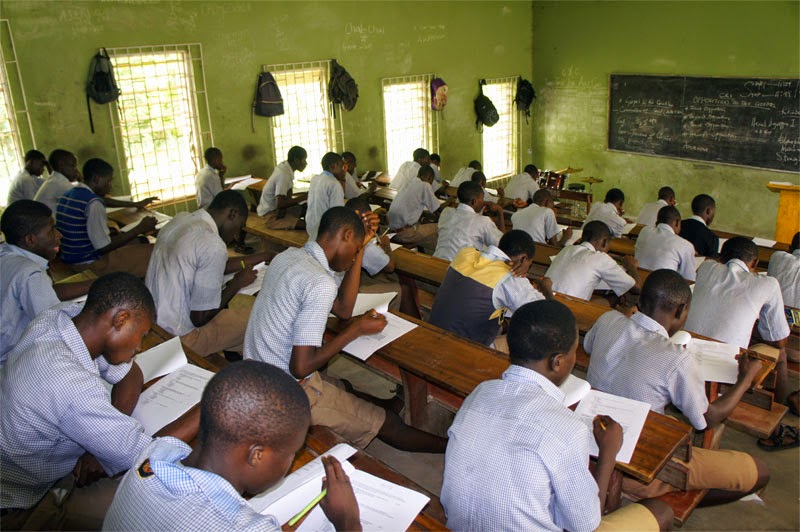 The Head, Nigeria National Office of WAEC, Olu Adenipekun, announced that 39, 557 candidates obtained credits and above in a minimum of five subjects including English Language and Mathematics in the January/February diet.

“A total of 3,102 candidates representing 26.08 per cent obtained credit and above in a minimum of five subjects including English Language and General Mathematics. The percentage of candidates in this category in the WASSCE for Private Candidates 2018 – First Series was 17.5 per cent,” he said.

The examination, which was introduced as a second alternative for private candidates apart from the November/December WASSCE, was written by 11,892 candidates out of 12,202 that registered.

He added that 376 candidates (3.16 per cent) had their results withheld because of examination malpractice.

The HNO said the incidence of examination malpractice was low because the number of candidates was manageable compared to the school examination written by over one million candidates yearly.

“It is very difficult to have a large number of candidates writing an examination and not have examination malpractice. But the size of the candidates for this diet of exam allows us to monitor closely the ad-hoc staff better than other diets.

“For this diet, we had Council staff monitoring each centre in addition to the supervisors and others. So this worked to reduce examination malpractice,” he said.

Regarding results withheld for errors, Adenipekun said the Council had made efforts to reduce errors in the process of registration but still patiently sorts through scripts to identify candidates who made mistakes in their registration numbers or who submitted scripts without names.

Giving further statistics about the examination, Adenipekun said 6,180 (52 per cent9 candidates who took the examination were male, while 5,712 were female.

The HNO expressed hope that this particular diet of WASSCE for private candidates would soon gain popularity such that it would reduce the pressure for those outside the secondary school to register for the school examination conducted in April/May.

80-year-old woman enrols in primary one, says she hopes to become a teacher

The Federal Government has said that the registration for the National Examination Council (NECO) for SS3 students and also the National Business and Technical Examination Board (NABTEB) will continue running as WAEC is set to begin examination on August 17.

The Minister of State for Education, Mr. Chukwuemeka Nwajiuba, who said this at the media briefing of the Presidential Task Force (PTF) on COVID-19 in Abuja on Monday, urged school teachers to continuously engage the students ahead of the examinations.

“Once the WAEC examination starts on August 17, it will run till the middle of September and NABTEB will start immediately and run till October.

“NECO examination will start on October 10, about a week to the end of NABTEB and run through to November.

“We expect that throughout the period, students are working and learning.

“We don’t just want them to be in school and be playing. This is the exit class. It says a lot about the six years spent in secondary school.

“Right now, we are lifting the registration for NABTEB and NECO, continuously running, even while we are about to begin WAEC.

“All examinations are a test of outcomes. We will want our teachers to continuously engage the students.” 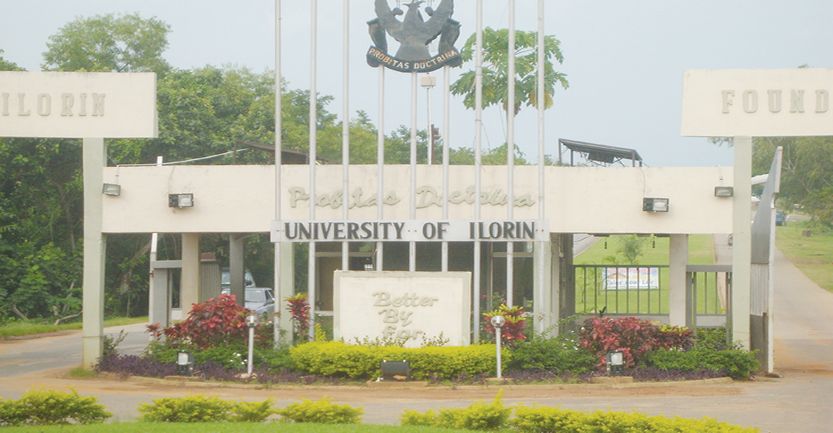 A 300 Level student of the Faculty of Law, University of Ilorin, Miss Famuyiwa Olushola, has won the maiden edition of the International Bar Association (IBA) Vlogging Competition.

According to the University of Ilorin Bulletin issued on Monday, Olushola award letter, written by Anna Toth, the Divisions Administrative Assistant at IBA headquarters in London, United Kingdom, informed her of being selected as the winner of the IBA Vlogging Competition in the law student category.

The publication said that the “IBA introduced the first-ever vlogging competition for young lawyers and law students, looking for their input, thoughts and opinions on COVID-19 and the law.

“It received many impressive videos from all over the world which were all assessed based on topic, quality and professionalism”.

The award letter, dated July 28, 2020, outlined the details of the award to include two years’ free student membership with the IBA, waived registration for either the Law Student Conference or a Young Lawyer Training Day, taking place in 2021.

In her reaction, Famuyiwa, expressed happiness over the award, describing it as a great impetus for her to work harder towards making a great career in the legal profession after her graduation and call to Bar. 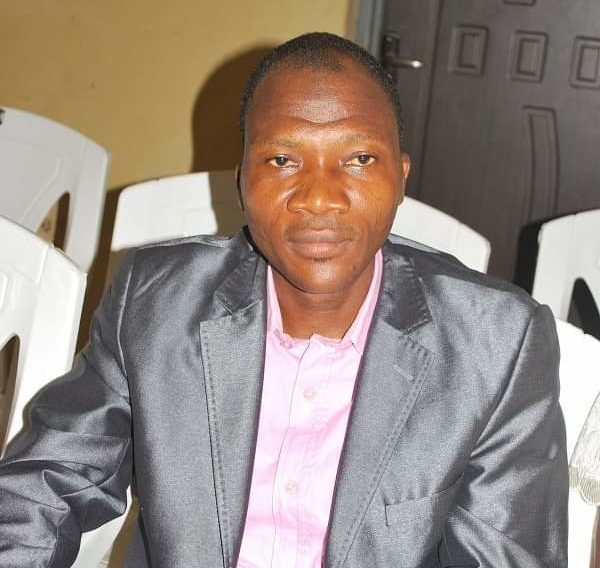 The National Alumni Association of the Federal College of Education (Special) in Oyo, Oyo State has petitioned the Economic and Financial Crimes Commission (EFCC) to investigate and prosecute her erstwhile National President, Dr. M.A Oladimeji, for fraud.

According to a copy of the letter made available to the press, the National Executive Council of the association alleged that Oladimeji without carrying along other members of the executive produced new receipts for the association and distributed same with fraudulent intent.

He was also alleged to have made unapproved withdrawals from the association’s account with Heritage Bank, Plc.

The association pleaded with EFCC to investigate the case to retrieve all money withdrawn and prosecute the accused if found guilty. 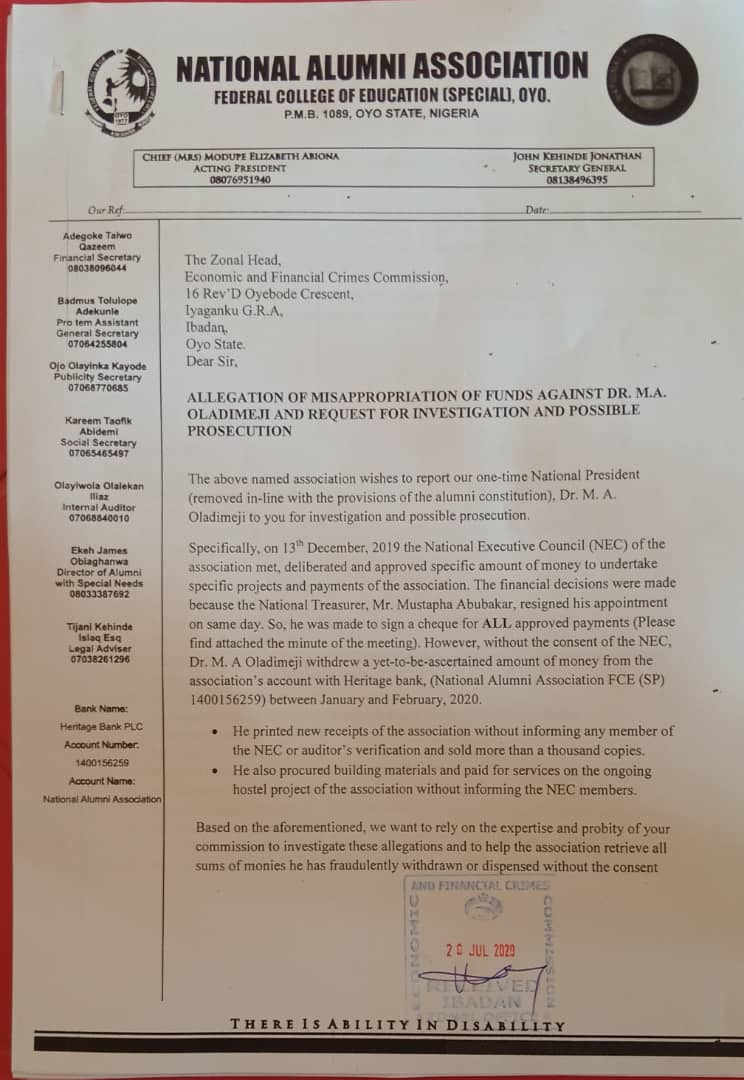 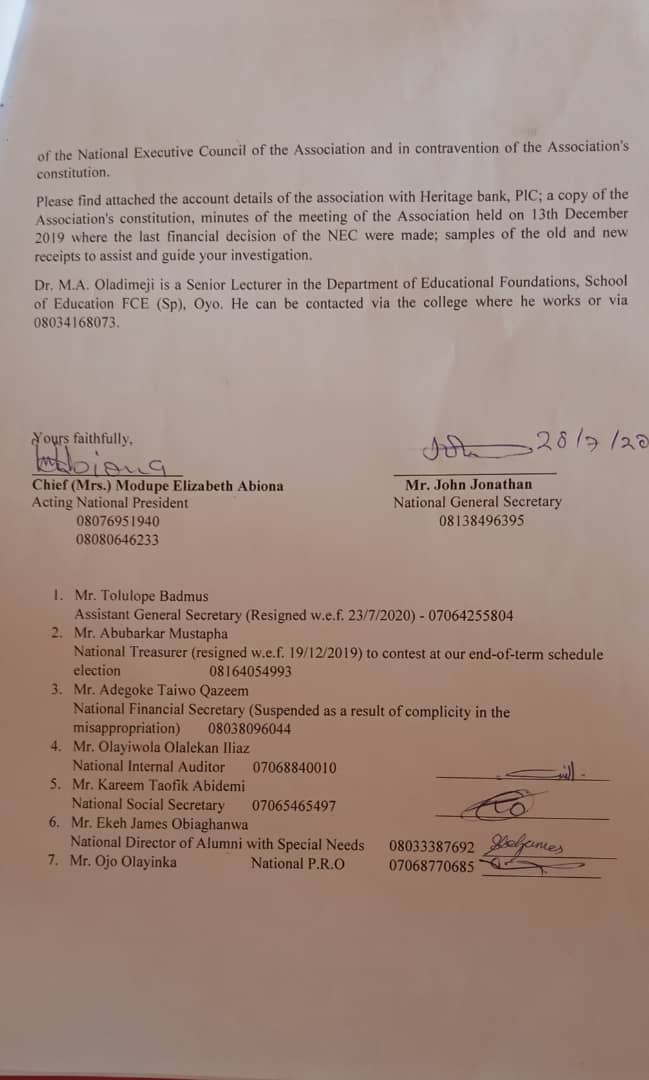