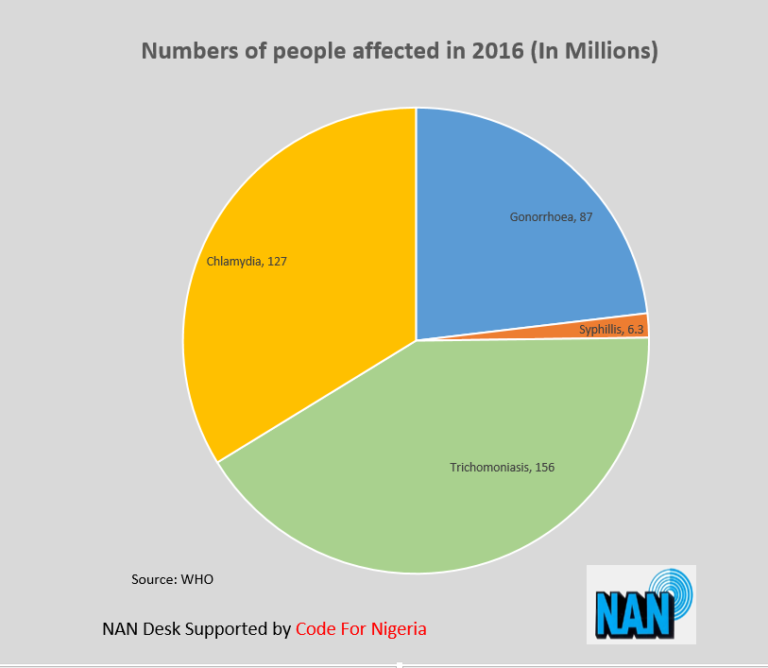 Every day, over one million new cases of curable Sexually Transmitted Infections (STIs) are recorded among people aged 15 to 49 years, a World Health Organisation (WHO) research says.

The data published online by the Bulletin of the World Health Organisation on Thursday said this amounts to over 376 million new cases annually of four infections which include chlamydia, gonorrhoea, trichomoniasis and syphilis.

According to the research findings, in 2016, there were 127 million new cases of chlamydia, 87 million of gonorrhoea, 6.3 million of syphilis and 156 million of trichomoniasis.

Dr Peter Salama, Executive Director for Universal Health Coverage and the Life-Course at WHO said: “We’re seeing a concerning lack of progress in stopping the spread of sexually transmitted infections worldwide.

“This is a wake-up call for a concerted effort to ensure everyone, everywhere can access the services they need to prevent and treat these debilitating diseases.’’

The report said that untreated STIs had grave health implications, hence the urgency for access to prevent and treat these diseases.

“These STIs have a profound impact on the health of adults and children worldwide.

“If untreated, they can lead to serious and chronic health effects that include neurological and cardiovascular disease, infertility, ectopic pregnancy, stillbirths and increased risk of HIV.

“ STIs are also associated with significant levels of stigma and domestic violence.

“Chlamydia and gonorrhoea are major causes of pelvic inflammatory disease (PID) and infertility in women.

“In its later stages, syphilis can cause serious cardiovascular and neurological disease. All four diseases are associated with an increased risk of acquiring and transmitting HIV.

“Transmission of these diseases during pregnancy can lead to serious consequences for babies, including stillbirth, neonatal death, low birth-weight and prematurity, sepsis, blindness, pneumonia, and congenital deformities,’’ it said.

According to the report, syphilis alone caused an estimated 200,000 stillbirths and newborn deaths in 2016, making it one of the leading causes of baby loss globally.

It said that STIs remained a persistent and endemic health threat worldwide indicating that since the last published data for 2012, there had been no substantive decline in either the rates of new or existing infections.

“On average, approximately one in 25 people globally have at least one of these STIs, according to the latest figures, with some experiencing multiple infections at the same time.

“Some, including chlamydia, gonorrhoea and syphilis can also be transmitted during pregnancy and childbirth.

“In the case of syphilis, transmission can occur through contact with infected blood or blood products, and injecting drug use,” it said.

On preventive strategies, the report said STIs were preventable through safe sexual practices, including correct and consistent condom use and sexual health education.

“Also, timely and affordable testing and treatment are crucial for reducing the burden of STIs globally, alongside efforts to encourage people who are sexually active to get screened for STIs.

“Pregnant women should be systematically screened for syphilis as well as HIV.

“All bacterial STIs can be treated and cured with widely available medications. However, recent shortages in the global supply of benzathine penicillin has made it more difficult to treat syphilis.

“Rapidly increasing antimicrobial resistance to gonorrhoea treatments is also a growing health threat, and may lead eventually to the disease being impossible to treat,” it said.

Trichomoniasis (or “trich”) is the most common curable STI globally.

It is caused by infection by a parasite during sexual intercourse. Chlamydia, syphilis and gonorrhoea are bacterial infections.

Symptoms of an STI can include genital lesions, urethral or vaginal discharge, pain when urinating and in women, bleeding between periods.

However, most cases are asymptomatic, meaning people may not be aware they have an infection prior to testing.

No manhood can ever shift a womb, Nigerian doctor lectures men
Israeli tourists in Cyprus freed after rape allegation is withdrawn