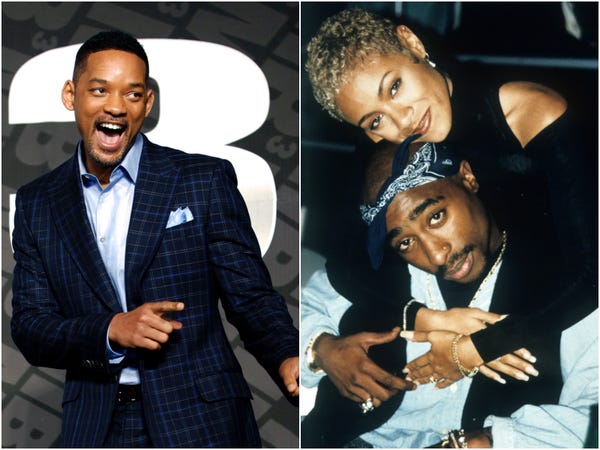 American rapper and actor Will Smith has made a startling revelation about his wife, Jada Pinkett Smith’s close bond with late rapper Tupac Shakur.

The 51-year-old Hollywood actor has admitted that he was “jealous” of Jada and Tupac’s relationship and regretted not getting to know the rapper better before he was shot dead.

Will, who was a rapper himself before becoming an award-winning actor, was speaking on American radio station Power 105’s The Breakfast Club, as he promoted Bad Boys for Life alongside co-star Martin Lawrence.

The show’s host, Charlamagne tha God, asked Will if he felt jealous over Jada’s ‘love’ for Tupac, to which he replied: “F*** yeah.”

Will went on to say:

“That was in the early days. That was a big regret for me, too, because I could never open up to interact with Pac.”

“They grew up together, they loved each other but they never had the sexual relationship.

“We were in the room together a couple of times and we never spoke to each other. That was a huge regret for me, I couldn’t just handle it

“I was deeply insecure and wasn’t just man enough to handle that relationship.”

READ ALSO: 20,000 women apply to fly to the moon with Japanese billionaire

Jada and Tupac had met during their teenage years at The Baltimore School for the Arts.

They became instant friends and were still in constant contact when Jada hooked up with Will.

“I was the soft rapper from Philly and he was PAC” | Full interview with #WillSmith and #MartinLawrence 👉 https://t.co/3PUzefymrk pic.twitter.com/V8eVLpXv9r