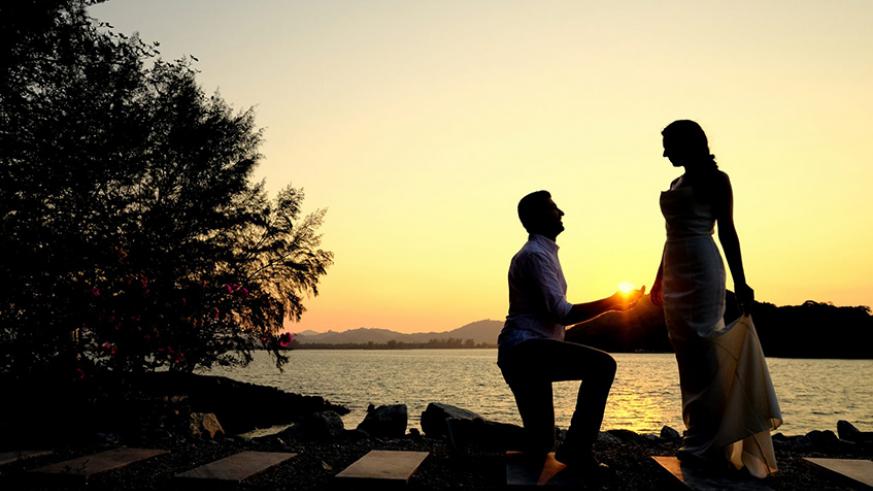 People marry for different reasons, there are those who married for the wrong reasons, some out of pressure, some out of pity for their partner while some truly married the love of their lives and they’ve been truly living happily ever after.

Not so many people who are married or previously married had the privilege of falling into the last category. At least a viral Twitter thread has shown.

Marriage counselors often advise intending couples not to expect everyday bliss in their marriage, while perfection in a partner is not also expected to be found on the cards. Yet there are still complaints about people marrying partners who could be a little bit the wrong choice, and boom, divorce is already knocking.

A Nigerian photographer and actress, Gbemi Anthonia Adefuye, aka Toni Tones, took to her Twitter page, like she did in 2018, to ask women to share why they got married.

In a viral tweet in April 2018, Toni had asked men to share why they got married to their wives and the reactions were mind-boggling.

18 months after the male version, Toni called on the women to share the motive that led them into marrying their partners, and like 2018, to say the reactions are quite startling would be an understatement.

“In 2018 I wrote a thread asking men whether they married the woman they loved the most, or the woman who was around when they were ready to marry.

“Ladies, now I want to hear from you. Did you marry the love of your life? Or did you marry out of pressure or convenience?”

The viral tweet with over 1500 retweets and 3500 likes has sparked a series of reactions – the emotional, heartbreaking stories and the admirable love stories that social media users are seeing as models and perfect fits for love-goals.

While many are pouring out their stories of regrets, love gone sour and true love under the thread, some are preparing to get married this weekend amidst pop and pageantry. Well, they are the ones in a position to say if they are truly as happy as their wedding guests who will be treated to delicious delicacies – Nigerian Jollof, small chops etc with assorted wines and other drinks to ‘step down’.

READ ALSO: I still cringe when I remember, says lady who allowed her boyfriend date her best friend

The reactions are no doubt scary and they seem to be mounting fears in the mind of single ladies already, a frightened Twitter user wrote:

“Not married yet and not sure if I ever will after reading these BUT… Pre-marital counseling is a must for me. We shall deal with any doubts before entering into a marriage. Man or woman, all issues must be addressed. You will not disgrace me or break my HEART!!”

“Ouch I’ve never been married but can’t imagine marrying someone I deep down don’t want to be with. Divorce is WAY too expensive to gamble like this!!”

And what’s crazy is my ex husband is now about to get remarried and he told me it’s for convenience. I hope I’m never the person that a man chooses bc of convenience. And if I am, keep that shit to yourself.

You can’t compare your dating relationships to your married life. When you add kids to the mix what you want Is someone who is wholeheartedly committed to doing life together. It’s more than a feeling. Of course many people could be the love of my life, but it’s whom I CHOSE…

I married him because I fell in love with him. He was first man I was in love with that I didn’t have to fret whether he loved me as much as I loved him. It was very comforting. Other men who had been head over heels in love with me, I didn’t feel the same.

It helps that we had been friends through those years of being with other people I guess so we know each other histories a bit. But what we have is deep love with friendship and respect as well as attraction which is so much better than drama and something that could fizzle out.

I got married 2 weeks after I turned 18. I married for what I thought was love. Looking back it was a combination of trying to get away from my family and being desperate for validation and affection. In the end though, it broke me.

Definitely love of my life. Met him 9 months after breaking up with an ex I was with for 5 years. And we both knew immediately.

If I married my ex, it honestly would have been from pressure of “but I’ve been with him for 5 years though”.

He had while in the military that he knew about but had no intentions on disclosing to me. He was well off and stable but lacked integrity. Thank God I didn’t fall victim to the pressure before I knew the truth. Take your time ladies, I’m happy and falling in love now.

Meanwhile, some women have begged to remain anonymous as they shared their stories with Toni via the direct message.

See screenshots of their stories: 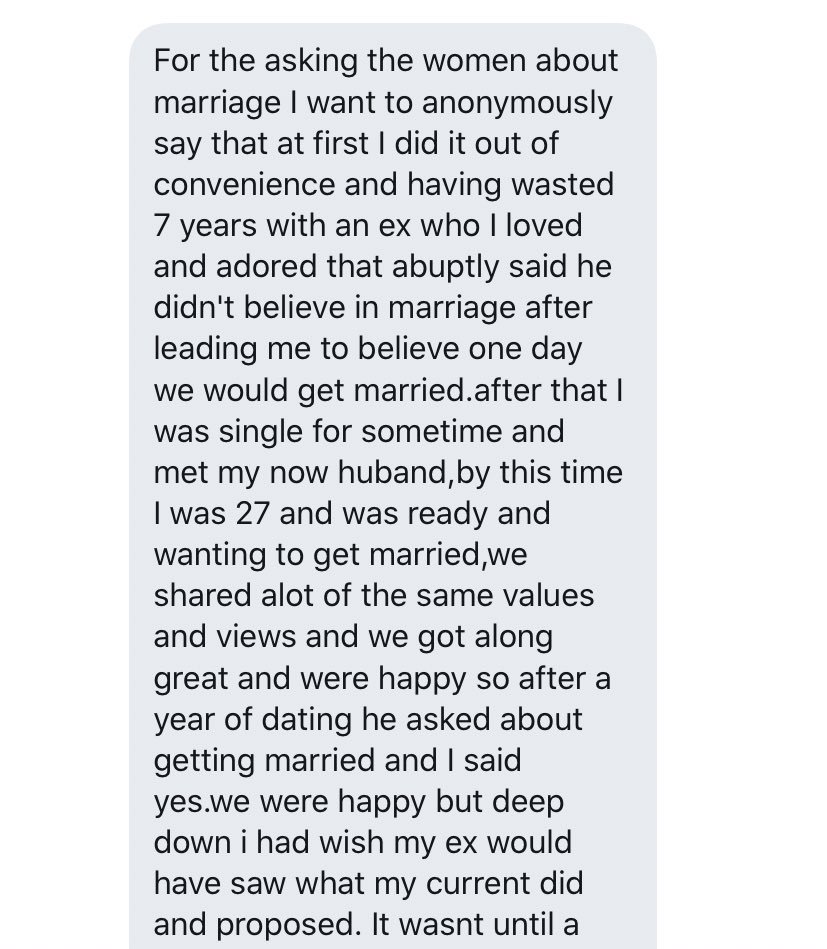 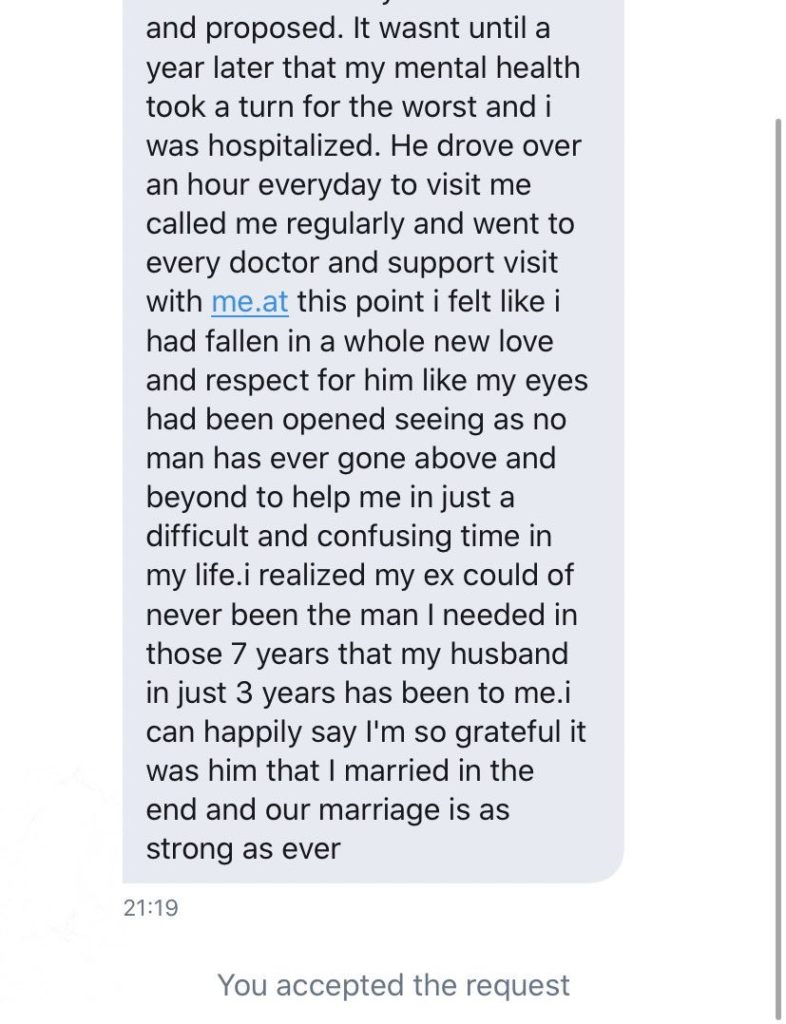 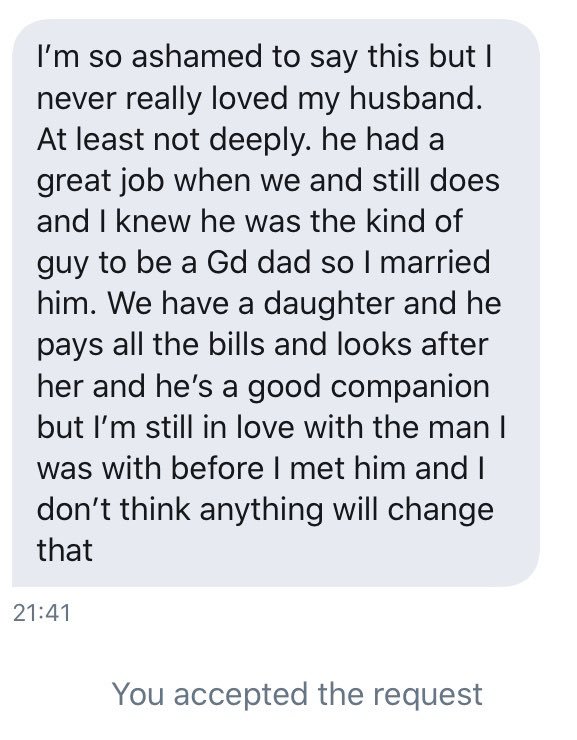 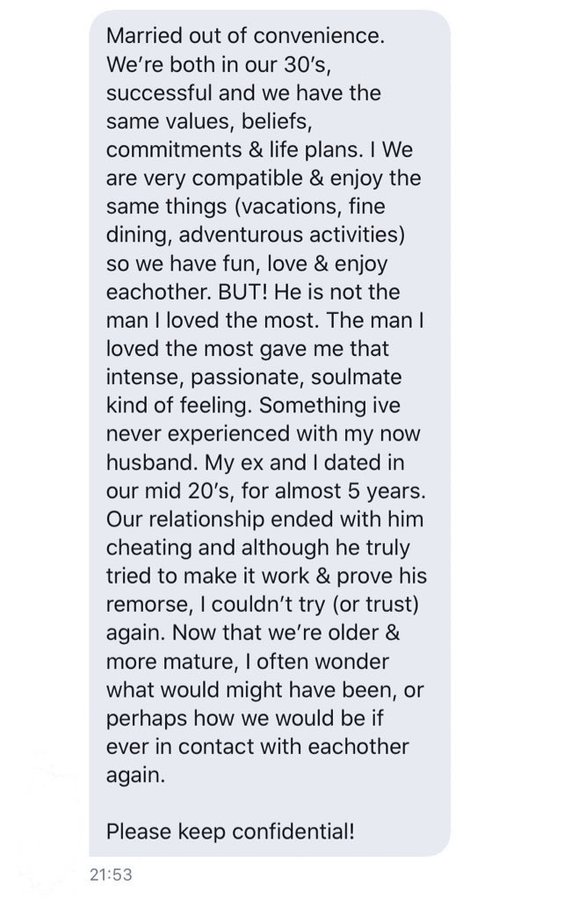 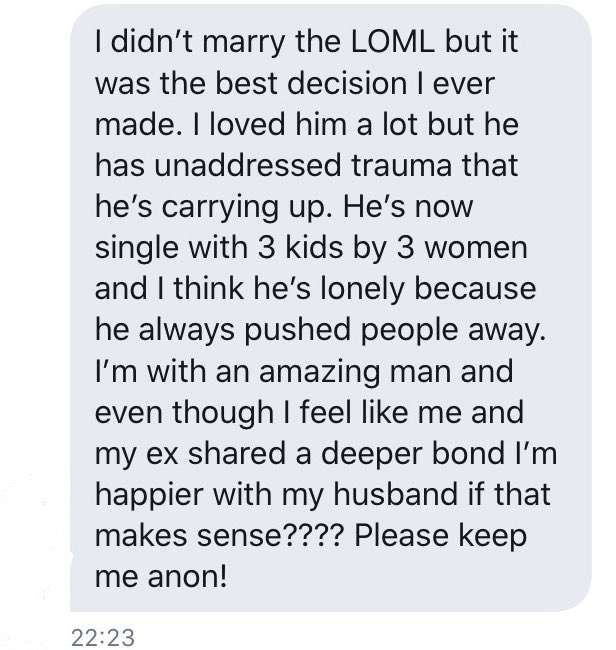 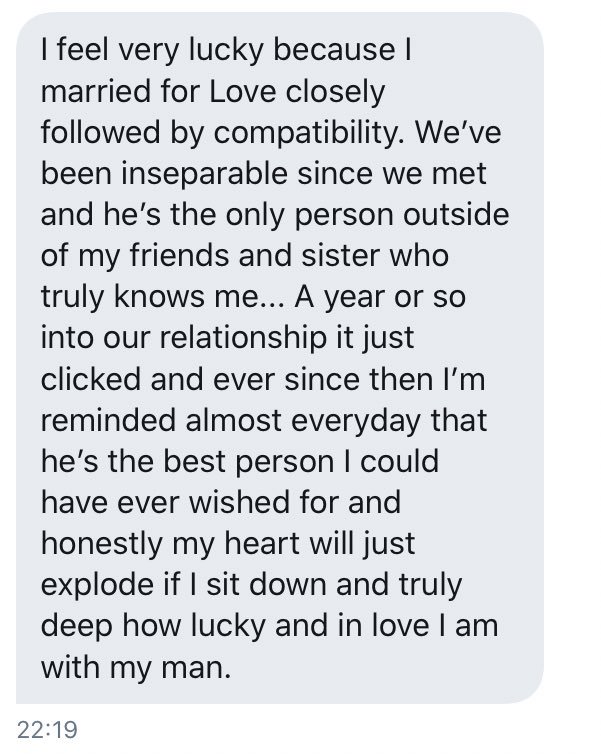 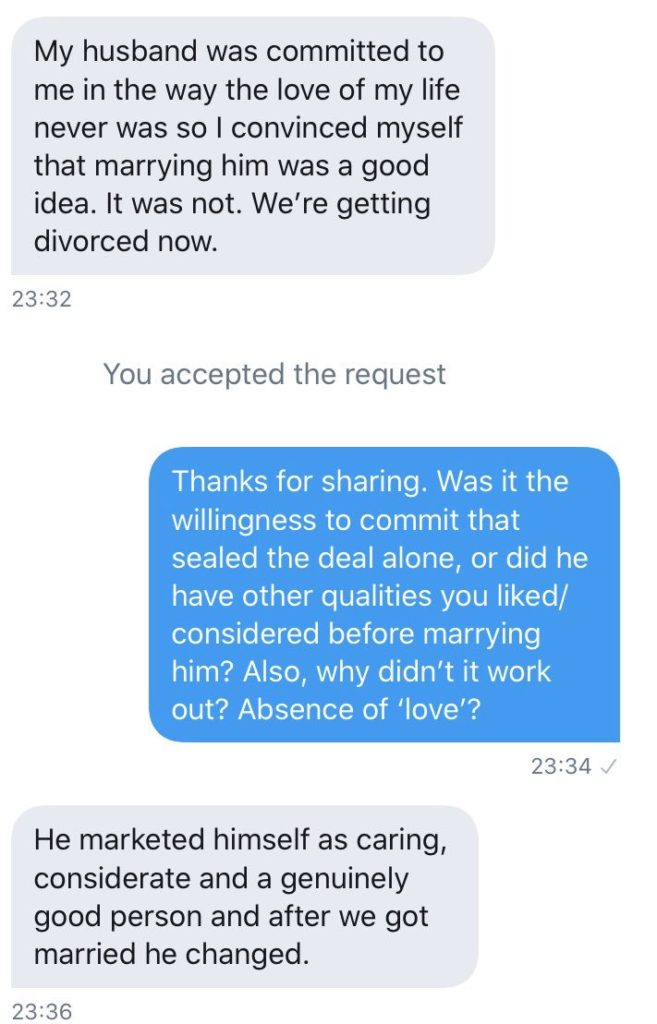 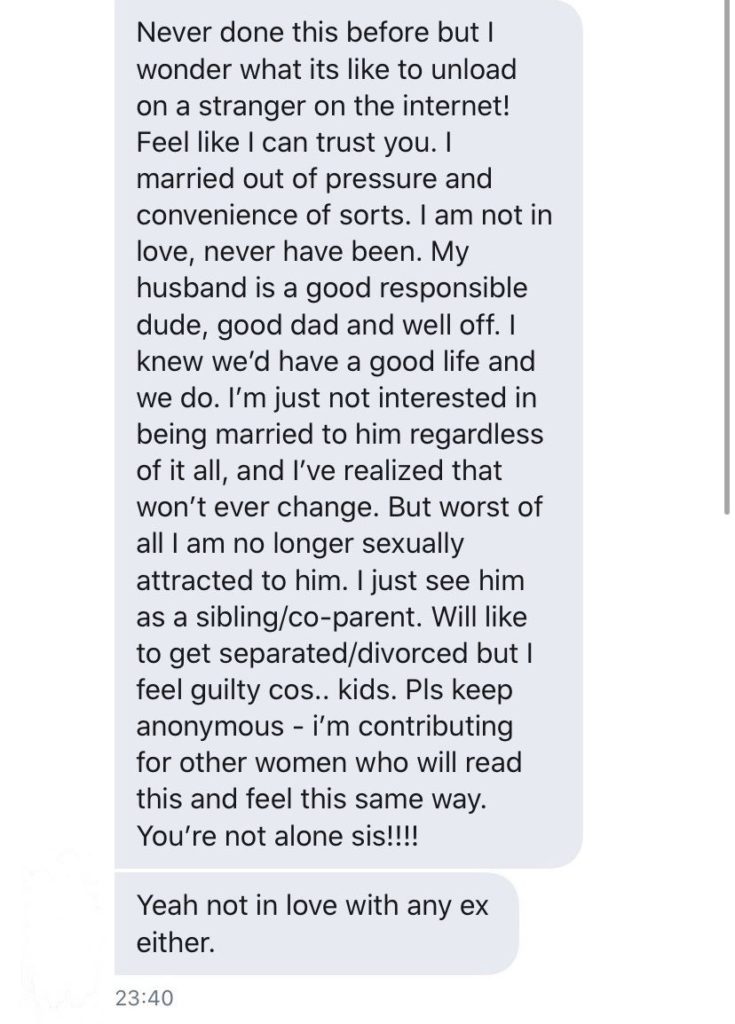 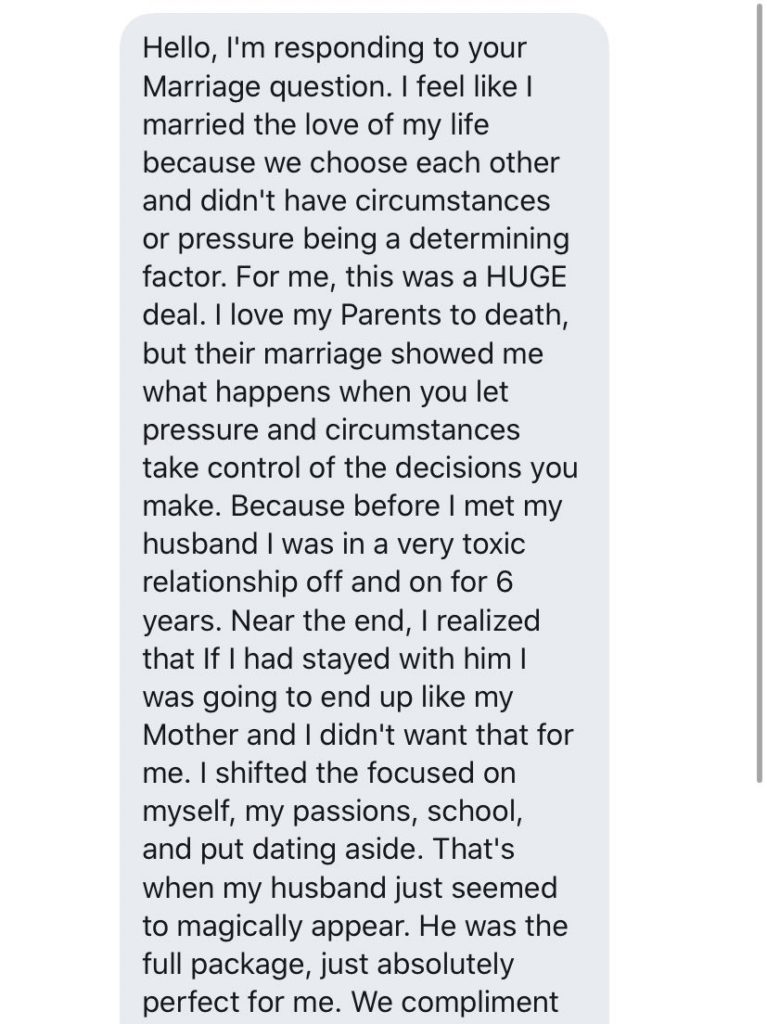 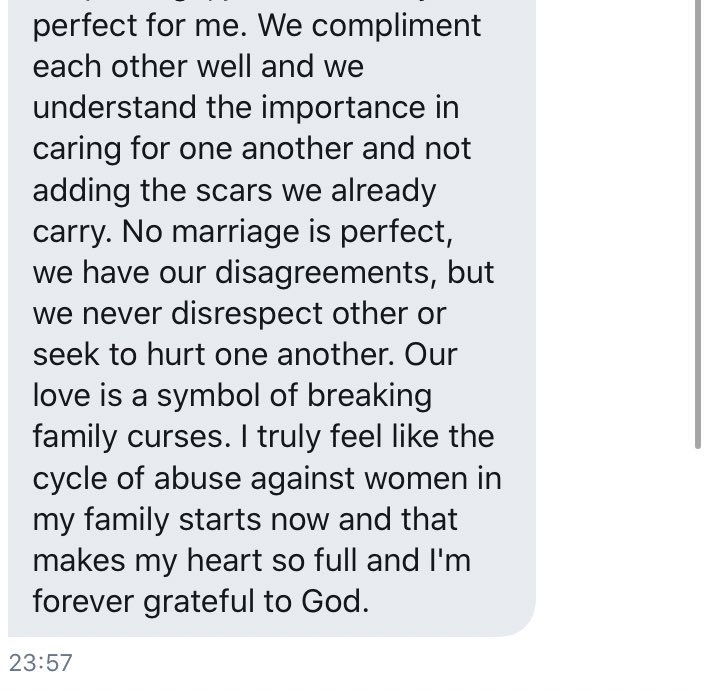 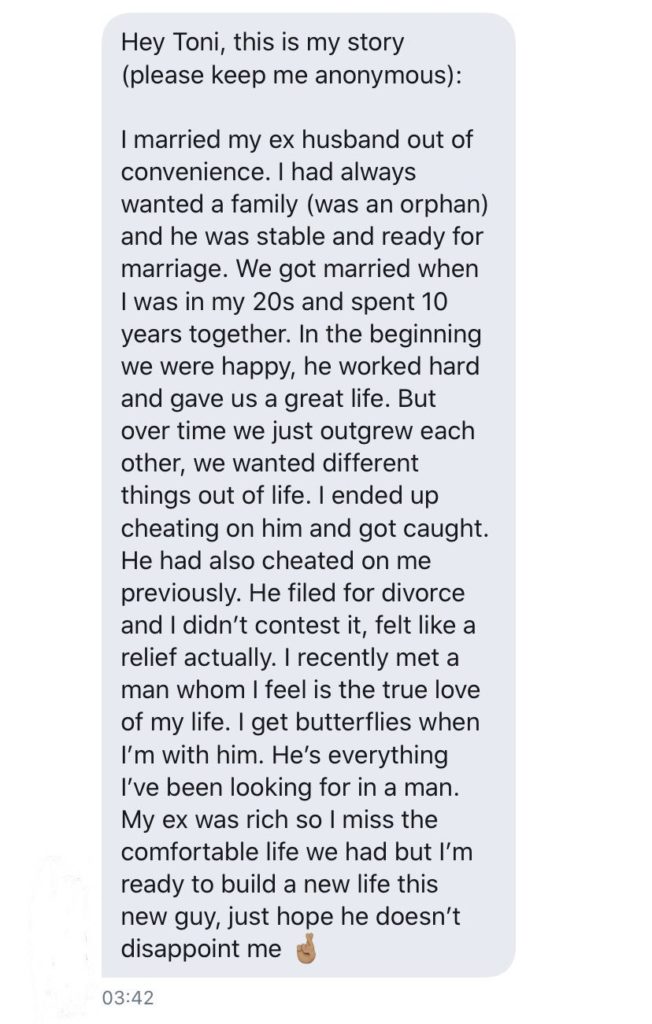 See how fans are reacting as Vector disses M.I, shades Ambode in #JudasTheRat