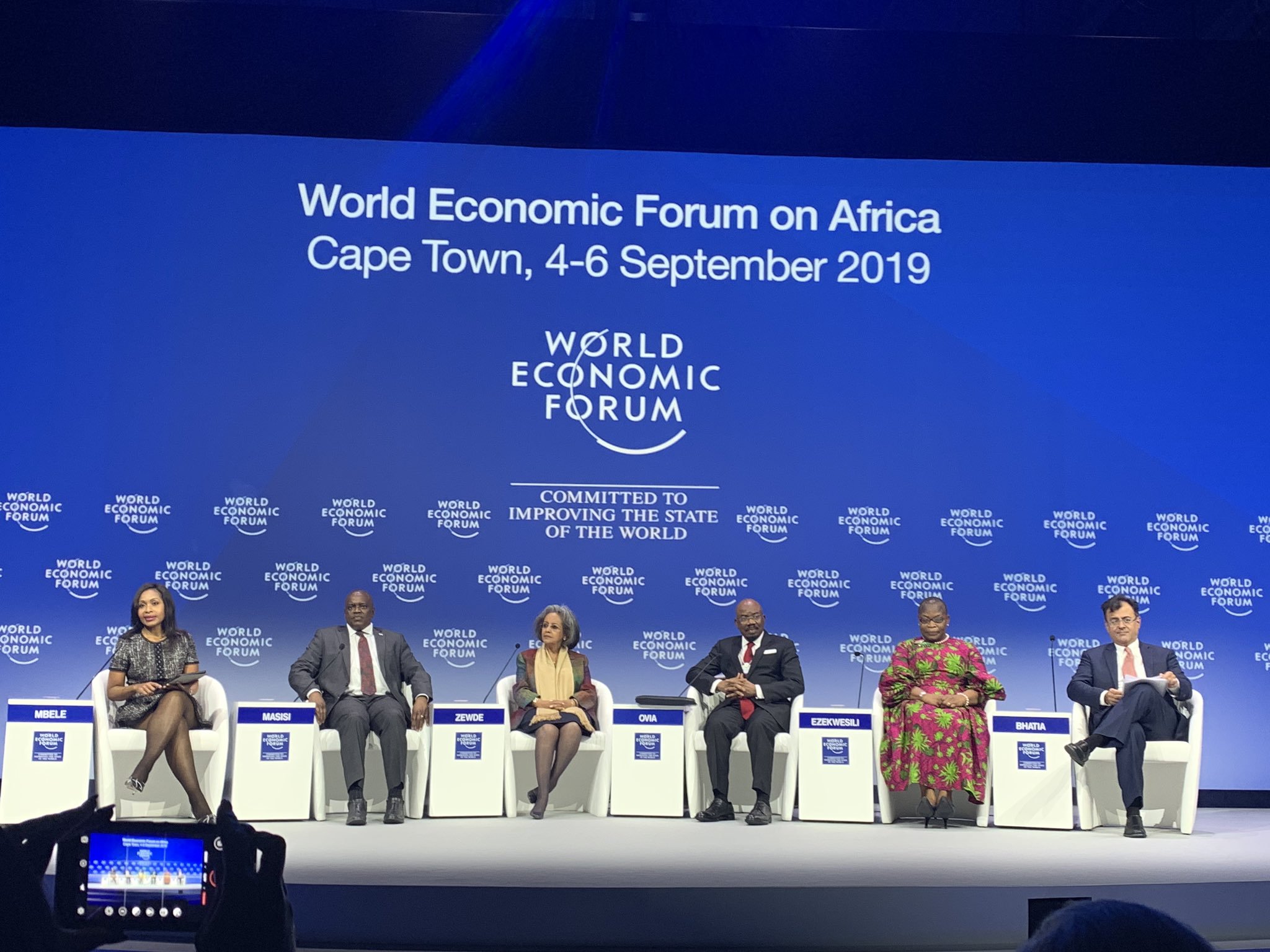 The 2019 WEF on Africa kicked off this morning in Cape Town and will end on Friday.

Nigeria, Rwanda, DR Congo and Malawi are some of the African countries that have boycotted the forum being hosted by South Africa in protest against the xenophobic attacks on foreign nationals in the country.

Nigerians had hailed the decision of the Federal Government to boycott the event, saying it was a right step.

However, the appearance of Ezekwesili and the Founder of Zenith Bank, Jim Ovia, at the Forum on Wednesday has sparked outrage on social media.

A photo of the duo on a panel session at the ongoing WEF emerged on Twitter on Wednesday evening.

Reacting to the duo’s attendance at the Forum, Nigerians are lambasting Ezekwesili for attending the event, saying she is insensitive to the plights of her countrymen who are victims of the attack.

Some also described her as a hypocritical activist and criticised her for not ‘standing’ by her country over its decision to boycott the event following attacks on its citizens in the country.

Madam Oby at the World Economic Forum going on in South Africa… The love for dollars and camera lights is more than those Nigerians that are being killed by South Africans… pic.twitter.com/dzreemUzEu

Very interesting!!
Madam Oby at the WEF! To go and earn Forex, then fight back for humiliated Nigerians or what?
Who can try & defend this? Where are her patients? 😬 pic.twitter.com/KAE2HF1yyQ

Yes sir, Nigerian government has boycotted the World Economic Forum holding in Cape Town, South Africa, but some individuals from Nigeria including a former Minister are attending on their own. https://t.co/txMvLee3L3

So Madam Oby is attending the World Economic Forum in South Africa today. Wow. Imagine how she’s going to wail and drag PMB if she won’t be attending the Forum and the Nigerian government didn’t pull out of it… Hypocrite!

So madam Oby went to south Africa for the WEF.
I guess her sponsors wont be happy if she misses the conference after they’ve paid …😬 https://t.co/utkNuyahA9

For those of you who still take Madam Oby’s tweet/actions to heart, i feel for you. Im only dissapointed at Jim Ovia not Oby.

Just imagine federal Govt didnt pull out of the summit and she did🙄
Mind you, i said just imagine🤭 Hypocrites! #SayNoToXenophobia #StopXenophobia pic.twitter.com/4CSxbmW62Q

While I’ve avoided all the temptation to vilify madam Oby on the internet all this while, just today madam Oby has proven she stands for nothing.

No wonder @BashirAhmaad refuse to name her.

In days like this, one is forced to ask: what’s Oby? https://t.co/O32KIjkaZu

I really wish Nigerians can transfer their anger and aggression towards madam Oby for attending that @wef event in South Africa. Something must be wrong with her

See people who are telling you to boycott every South Africa owned company.

Madam oby is already in southAfrica as a private citizen to attend WEFF. See your activist. 🤗

Madam oby will use everyday of her life to abuse President buhari mean while she careless about Nigerians. pic.twitter.com/vJHt2iNDEF