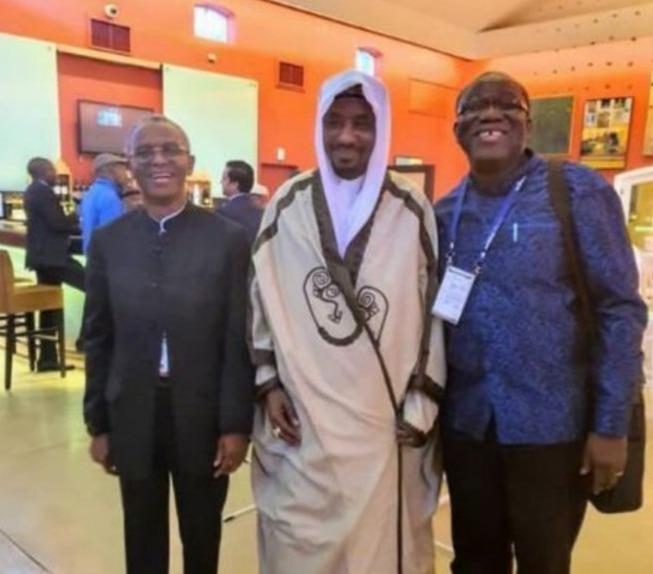 Nigerians on social media have transferred their anger to Kaduna and Ekiti State Governors Mallam Nasir El Rufai and Kayode Fayemi respectively for attending an event in South Africa.

The Governors and the Emir of Kano Mohammed Sanusi were seen in viral photos attending an event in Stellenbosch which is about 50km away from Cape Town in South Africa where the World Economic Forum (WEF) on Africa is presently holding.

The Kano Emirates Council tweeted photos of the Emir and the Governors at the event.

WuzupNigeria reports that the Nigerian government, as well as some African nations, had announced they were boycotting the WEF over the latest xenophobic attacks on foreign nationals in South Africa.

Former Minister of Education, Oby Ezekwesili and founder of Zenith Bank, Jim Ovia, had come under social media attacks on Wednesday for attending the WEF despite the Nigerian government’s withdrawal from the event.

Ezekwesili has, however, taken to Twitter to explain why she attended the event.

They lambasted the two governors and also slammed Bashir Ahmad, a social media aide to President Muhammadu Buhari for singling out Ezekwesili for attack over her visit to South Africa.

Bashir had taken to Twitter on Wednesday to condemn Ezekwesili for attending WEF.

“Once FG withdrew her presence at World Economic Forum in Cape Town, South Africa, our leaders such as El-Rufai, Fayemi, Sanusi, Aig Imoukhuede & Jim Ovia should have withdrawn. Stellenbosch (I miss my city) is just less than 1hr to Cape Town. I am disappointed. Come back home

“We aren’t a good Christian& Moslem if we were hard on Oby& closed our eyes against El -Rufai, Fayemi& Emir SANUSI. Yes they have arrived in SA b4 our decision to withdraw, but they were clever by half to go to nearby beautiful town Stellenbosch & pretend not to be in Cape Town

“I respect our APC leaders but they are human beings and not perfect. We must say the truth. Pls don’t come to my DM to preach what and what. I am not on their pay roll. So leave me alone pls

“If you know Cape Town very well, so many hotels are available. So don’t tell me anything about another meeting scheduled at Stellenbosch. Stellenbosch is like Bwari in Abuja or Mowe in Lagos abi Ogun state. A wine town . U will drink original wine there. Don’t defend NONSENSE pls.”

Reacting to Woye’s tweet, popular journalist Kadaria Ahmed explained that the governors didn’t attend the WEF as widely claimed on social media, but they were attending an event organised by the publisher of defunct Next Newspaper, Dele Olojede.

“They are not at #WEF they are @africainworld a private event organised by Nigerian @deleolojede. This event has NOTHING to do with WEF and and started before the attacks. The question is should a Nigerian man who spent his resources organising this be ruined?”

“The pulse of the NATION REJECTED anything South Africa. Do you know the distance between Stellenbosch to Cape Town? Any event in South Africa by any Nigerian should be CANCELLED. Who is paying El Rufai or Fayemi’s bill? Personal or FAAC . Pls read and pass and no comment.”

Two APC Governors & Buhari’s close allies, Fayemi & El Rufai, along with Lamido Sanusi, Amina Mohammed, Jim Ovia, and many others also attended WEF. But Bashir fraudulently tossed Madam Oby to you because she speaks against this govt’s failure, and you fell for it. Very pathetic.

Just when I thought me and you were finally agreeing on something, never knew you dishonest Buharists just decided to use @obyezeks as scapegoat for attending WEF, while your sacred Cows, Fayemi, Elrufai & SLS are also in South Africa drinking Umqombothi. https://t.co/0Vdoz1v2ba

Bashir, at what point do you intend to tell your followers that Governor Nasir Elrufai, Governor Kayode Fayemi, Emir Sanusi Lamido Sanusi and Amina Jane Mohammed were also in attendance at the WEF? https://t.co/8V6Bv2MU3T

So Mallam Nasir El rufai, Emir Sanusi Lamido Sanusi, and Governor Fayemi were all at the WEF, but @BashirAhmaad and Buharists singled out Oby because maligning her will make us forget our President can’t pronounce Xenophobia.

Fayemi, El-Rufai & 2 APC governors attended WEF in South Africa. But we aren’t aware of this because Bashir & other APC agencies only chose to roast madam Oby 🙆😂

At a time when your kinsmen being murdered in cold blood, Oby, El Rufai, Fayemi and Sanusi decided, for whatever reason(s), to visit South Africa. You guys are ONLY worthy of and I hereby recommend you for the next Ekweremadu-like “new yam festival” in Germany.

Mr. Bashir, do you know that El Rufai, Fayemi and SLS are in South Africa for the WEF too. They’re not even private citizens. I wonder what you and the bots you sponsored to attack Madam Oby think about that 😌 https://t.co/hQ6Z5akcp0 pic.twitter.com/QdCdYq2sJs

Bashir, at what point do you intend to tell your followers that Governor Nasir Elrufai, Governor Kayode Fayemi, Emir Sanusi Lamido Sanusi and Amina Jane Mohammed were also in attendance at the WEF? https://t.co/8V6Bv2MU3T

With the way people BMC, Buharists and the United Friends of APC (UFA) are twisting and bending after it turned out that Elrufai and Fayemi are in South Africa, you’d think Nigeria’s issue is with the World Economic Forum and not South Africa as a country 🤡🤡

At a time when our kinsmen are being murdered in cold blood, Oby, El Rufai, Fayemi and Sanusi decided, for whatever reason(s), to visit South Africa. You guys are ONLY worthy of and I hereby recommend you for the next Ekweremadu-like “new yam festival” in Germany.

You feed on lies, run with it & attack the subject & when the truth is out, you fail to use the same energy you used to attack to apologize?

Madam Oby was in SA so as Govs like Fayemi & El-Rufai plus the Sultan.

They sold a narrative for you because you are gullible. Na wa o

Elected officials @elrufai & @kfayemi were in South Africa for the conference but @BashirAhmaad aide to @MBuhari decided to question the presence of @obyezeks a private citizen in SA.

Waxing distractions to stop you from holding goverment accountable.