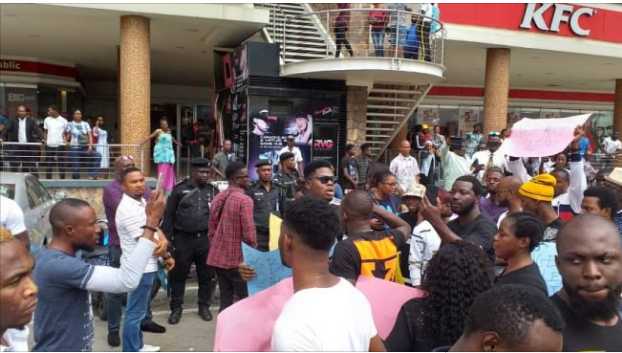 Some aggrieved Nigerians have invaded Shoprite outlets in Ikeja, Lekki and Surulere areas of Lagos, in what looks like retaliation to the spate of Xenophobic attacks on Nigerians in South Africa.

In several videos presently making the round on social media, some angry Nigerians were seen invading the outlet and destroying wares inside the Lekki Shoprite.

Though they were resisted by policemen at the outlet, the mob lit bonfires, gained access and started throwing away items on the stands.

TheCable reports that in Ikeja, Shoprite suspended its operations around 4pm, five hours ahead of its normal time for closing.

But some women inside the mall scattered wares on the floor.

While some of the workers attempted to stop them, others stood by amid fear that the attack could escalate.

In another video, a protesting woman was seen destroying wares inside the Shoprite outlet in Surulere as she bemoaned the attack on Nigerians by South Africans.

She was heard saying:

“What did they do? Is it a crime to migrate? Call your people (and) tell them that you condemn these killings against Nigerians.

“Let us know that you took a stand against them. Stop pretending as if you are not seeing it.”

Nigerians disrupting the operations of Shoprite at their Lekki Match. 4 police trucks had to be deployed there to stop the revolt. They also had to close the mall.

Those involved in the act reportedly lost their family members to xenophobic attacks in South Africa. pic.twitter.com/eFOFQrDZS7