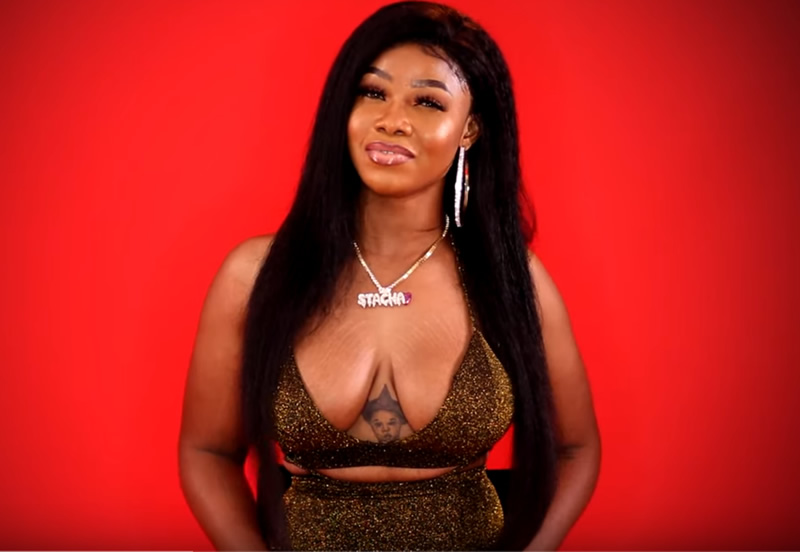 Following the disqualification of Anita Natacha Akide, better known as Tacha, from the 2019 Big Brother Naija reality show, there have been diverse reactions from BBNaija fans on Twitter.

The controversial Port Harcourt first daughter is the first housemate from the ‘Pepper Dem’ season 4 to be kicked out from the house for breaking the house rules thanks to her fight with her fellow housemate, Mercy.

Since her disqualification from the house, Twitter has been agog with celebrity tweets, memes and songs over the “hot-headed” 23-year-old housemate.

Some had even composed songs to mock her while also using hashtags like #tachadisqualified, #EverythingTacha #Trasha and the likes to show their disapproval towards the housemate.

Fast-rising rapper, Zlatan Ibile, also joined the “haters” crew by dropping a diss track to mock the ex-housemate who was rumoured to have body odour during her stay in the reality show.

Symply Tacha (born 23rd December 1995), is a graduate of Ignatius Ajuru University of Education. She hails from River State. She is an Instagram Influencer and Video Blogger widely famous for putting a logo of Davido’s record label – DMW on her chest.

Tacha had always wanted to be on BBNaija reality show, however, the ex-housemate was always at loggerheads with her fellow housemates and usually engaged in unhealthy squabbles with all over them even her once close pal, Seyi Awolowo.

Mercy, on the other hand, was handed two strikes for provocations and not walking out before things got out of hand.

My greatest joy is the fact that Tacha will now see that Mercy has always had more fans than her. She thought she is the favorite of bbn. Now she will see Mercy is actually the number choice. Now she will know who has been chasing clout.#ebuka#MercyLambo#BBNaija19

Never underestimate what it means to give God the glory #Jaruma #tacha #ebuka #BBNajia #MercyLambo pic.twitter.com/H6P5SjrQuc

See the song that @Zlatan_Ibile is about to drop because of #Tacha #BBNaija19 #ebuka #Tacha pic.twitter.com/fKFgTkjZcN

The last time Nigerians were this happy was when Abacha died.#tachadisqualified

Tacha is aggressive, rude, uncultured and arrogantly ignorant. When people defend her that she’s being herself, I think they are also mad. If that is her real self she needs a total reboot, makeover. She needs to be HUMBLE and learn basic life skills. #tachadisqualified

#Tachadisqualified. Tacha is a big disappointed to his state of origin (Port Harcourt)

Truth is Tacha is the cause of her disqualification..Biggie really tried for that girl aswear..even her fans never gave up on her they kept voting despite everything. But her pride and arrogance finished her.#BBNaija19 #tachadisqualified #Tacha

I am a Titan and one forever, but still I’m disappointed in Tacha. I hope she finds love and turn all these hatesand criticism around to make great waves. #TachaTitans #TachavsMercy #tachadisqualified #BBNaijaPepperDem @Symply_Tacha pic.twitter.com/eXeHB8HT60

Same tasha fans that trolled jackye and her boyfriend when she was evicted,trolled Jeff and Joe, cursed ebuka’s wife and child are here crying. it was fun when u all were trolling. Now its cyber bully Abi? Wicked people#Jaruma #tachadisqualified #EverythingTacha #TachaTitans

No matter where you go oo
Never forget the road that leads you home… #BBNaija #BBNaijaEviction #tachadisqualified pic.twitter.com/hWH2rqzcVZ

But wait ooo… y’all should look on the bright side. #Tacha will start getting a lot of calls from body spray companies.

It will get worse, can’t imagine the next lady that will come on BBN with Tacha’s script. Since we celebrate such vile characters in Nigeria, that explains everything you need to know when we pick leaders. #tachadisqualified #BBNaija19 #bigbrothernaija2019 #BBNaijaPepperDem

But she has a Bad attitude..you know you smell, and you still have mind to be rude & lousy (Not Only Mercy sef)? Instead make you just dey your dey

We expected more than that from her.